Home Art Of Art Of Community 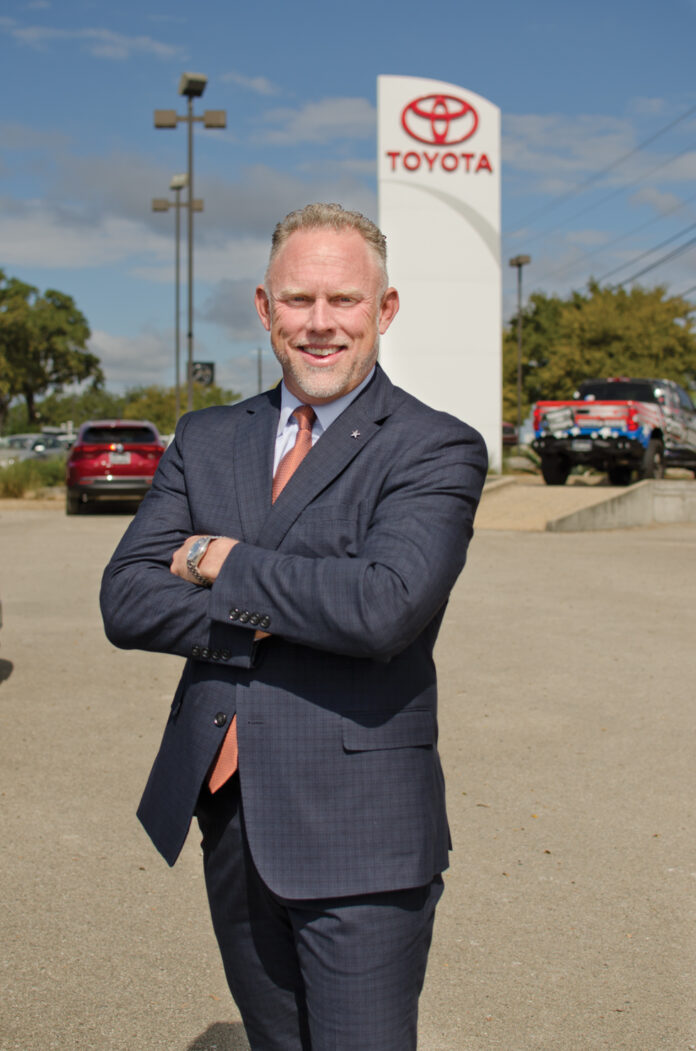 TToyota of Boerne opened in 2008, and has fast become one of the area’s most beloved local businesses. Heavily involved in our local community, the organization chose to tie their growth to local relationships, and that decision has paid off with a robust, growing operation. As a family owned company, Chris Franklin, General Manager, is tasked with not only keeping the company poised for growth, but to also to lead the company as part of that family.

“I grew up in Katy,” Franklin begins. After graduating from college in ’92, Franklin looked forward to a career in sales. He continues, “I was going to be in sales. I always knew that. I always wanted to be able to have something that was reputable that I could sell because I knew that if I wanted to be successful in this world, I knew I had to be able to sell. Sales is a skill that crosses over into anything, and I have loved it my whole life. I love the relationships that are born from those meetings.” 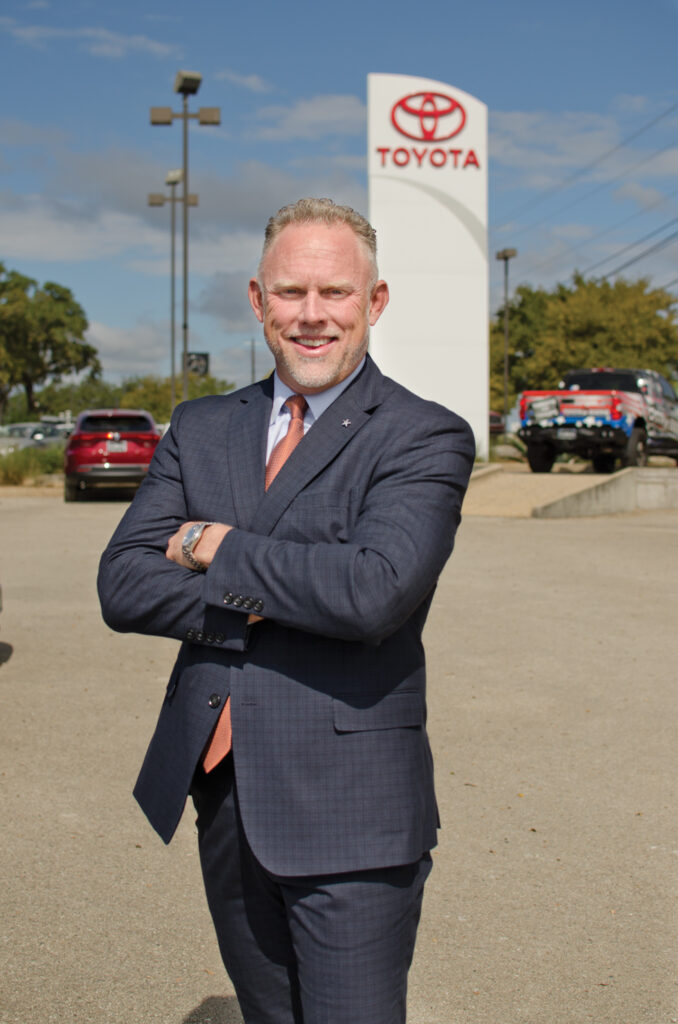 With this in mind, Franklin graduated and began working some serious hours in the restaurant and bar industry. He continues,“Throughout college, I worked in bars and restaurants, and when I got out, I stayed in that industry and then I basically worked my way up into management. I actually met a man at one of the bars I managed and he said ‘You’d be a great car salesman. You’re already working the ugly hours, and I think you could make a lot more.’ He owned 2 Saturn stores, a BMW dealer, and a lot of others, and I went to work at a Saturn store in Houston off of 290.”

Franklin quickly found that he was in the right industry, and he excelled at it. “At first I had never worked on full commission so that made me nervous, but once I figured out that there wasn’t a cap to what I could make, I quickly enjoyed selling cars. The part that I liked the most was that I got to meet so many different people. People are interesting, and I have always loved meeting them all.”

The auto industry in Houston is a tight group of professionals, and via some connections, Franklin was asked to meet with Vic Vaughan, owner of Toyota of Boerne, who also has dealerships in the Houston market. He explains, “Vic was HUGE in the Houston area. Everybody knew him. I was very nervous and very loyal to my Saturn group where I had been for 12 years, but I met Vic at a Starbucks, I instantly liked him and really, the rest is history.”

With his new employment, Franklin moved to Boerne not knowing where it was on the map. “I just knew Vic was coming here and it was going to be a great Toyota, and I knew it would do well. That was about it. However, once I got here, I fell in love with the area. It reminded me of Katy when Katy was really small. I identified with it because it’s just growing like crazy, yet feels so comfortable here. Thus began my Toyota of Boerne adventure as the Finance manager in ’08.”

To further enmesh Franklin with the family, he then met and married Vic’s daughter, Brittany, in 2010.

He continues, “I was in finance for a year and a half or so and then they moved me to the New Car Director around ’10. And then from there Shawn (Vaughan) was my General Manager, and they moved me to the General Sales Manager. Basically anything that happens that has to do with any car sales on the lot, I oversaw that. From financing to service to hiring to training, that was my role. I loved it. You get to give people a real opportunity and it’s so fulfilling to see people start at a certain level and to progress and basically change their own lives. I’ve got one kid that started 8 months ago and had never even had an apartment. He ran into me the other day and was talking about getting his own home. Those are the real “wins” for me. It’s my absolute favorite part for me.”

After Shawn Vaughan purchased another dealership in the Houston area, Franklin was promoted again in 2018 to General Manager. He continues, “In the beginning, it is drinking through a fire hose. It’s overwhelming to say the least. Now instead of being in charge of particular departments, now you’re in charge of everyone. These monthly all-employee meetings where we’d talk about everything going on, and Vic used to do them, and then Shawn, and the first one I ever did I looked around and there are over 200 people in there and I thought ‘I’m responsible for these people, and their kids, and their families…’ it was a seriously sobering moment. It’s probably an incubation period of about a year before you’re somewhat comfortable.”

And based on growth projections and customer service levels, Franklin’s trial by fire was short lived and he is excelling in his role. He explains, “My work ethic learned from my father is what gets me up in the morning. I don’t ever wake up in a bad mood. I’m alive, and I’m going to enjoy every single day. I’m excited to try and help in whatever way I can to potentially change someone’s life. I hate to use the words ‘They work for me’, as I prefer to say ‘They work WITH me’ – but I take all my pride and motivation out of watching people earn things that just improve their lives. A house. An education. A better career. It’s scary to have the responsibility, but I absolutely love it. It gets me fired up. To teach guys things that they can use here, or maybe along the way it takes them in good directions. The energy level comes from my dad. He taught me, “Laziness is a disease, and son, my job is to make sure you never ever get that disease.”” 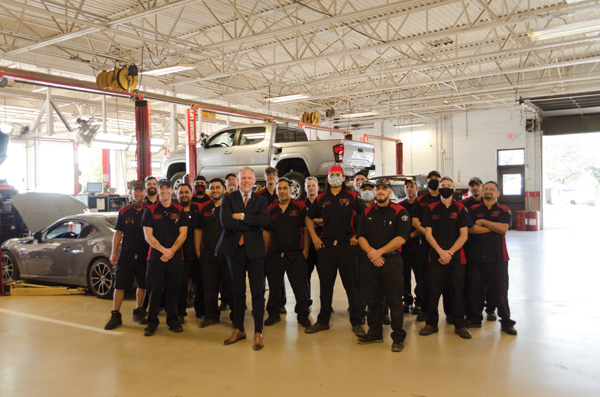 The family dynamic of Toyota of Boerne also presents unique opportunities for growth and to show Franklin’s true passion for what he does. “When Vic introduces me to people he says “this is Chris – he has the toughest job in the whole dealership – he’s married to my daughter!” But yes, there’s a ton of pressure. The job is hard enough, but as part of the family, this is the flagship for the entire family. I’ve compartmentalized things so that when I’m at work, it’s work – “Yes, Mr. Vaughan” – when I’m out, he’s my father in law. I have to look at them differently when I’m here. If something goes wrong at work, we have to handle it as professionals, but it can’t carry over to Thanksgiving dinner. They struggle with that sometimes, but I don’t. I work so hard to separate things – and to sit at Thanksgiving dinner and know that everyone at the table is tied to the success of the store is an awesome responsibility, and I love it.”

Toyota of Boerne has always been very community-minded, and that has not changed under Franklin’s leadership. He explains, “The Boerne ISD is super important to me. We support the auto shop program and I just think that’s awesome. We’re in a great community but not all kids go to college. We have a bunch of kids that went to auto school in Waco and are now working with us. Turkeys for the Troops is huge for us. Just the people here in Boerne are generally just amazing. The whole mentality here is wholesome and is a bit of a slower pace and you get to know your customers and friends and it’s so refreshing. When I drive into Boerne, some people forget to look up and you can see all the hills and it’s just amazing. My kid goes to a great school, and the people will forever keep me around. It’s a true sense of community and I never ever experienced that in Houston – people genuinely care and want to help.”

Chris, his wife Brittany, and their 5 year old Piper are permanent residents and that doesn’t appear that it will change any time soon. He finishes, “I had a buddy that lived here when I moved here, and he told me that if I’d give Boerne a chance for a year, I’d never live anywhere else no matter what someone offered me. It would take a nuclear bomb to get me out of Boerne now. I’ll never leave. I hope that the community sees that in the way we treat them, and in the investments we make locally. I’m so lucky to be here.”