Home Art Of Art of The Lockup 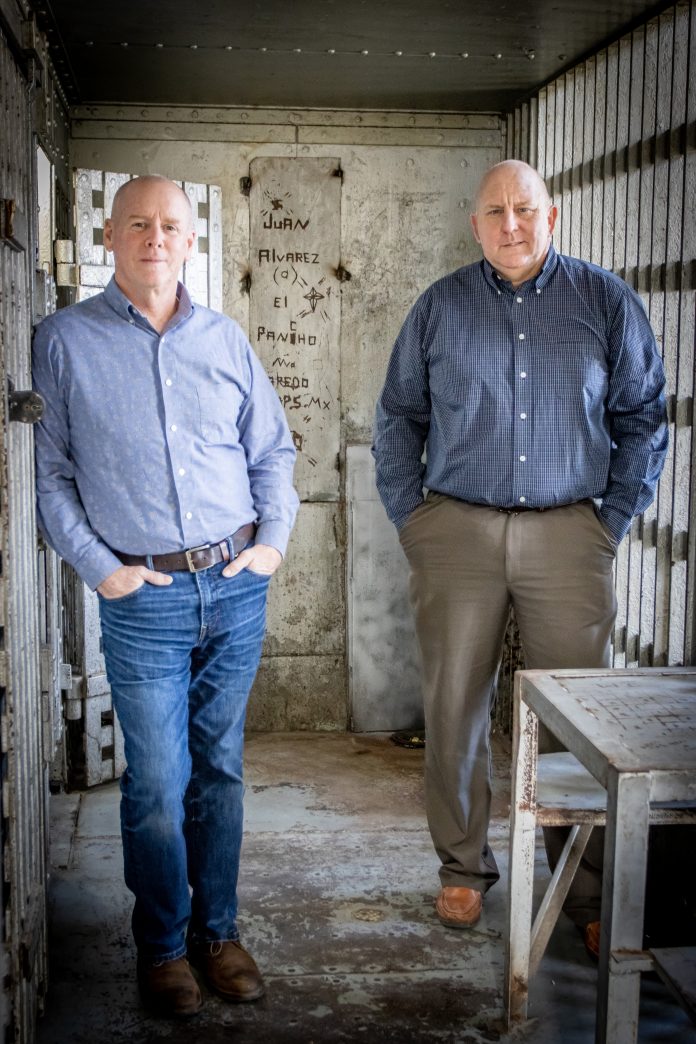 For Dean Sprowl and Paul Barwick, preserving the history of Kendall County is a very real and tangible passion. After a chance meeting, the two have thrown the past several years of work into rehabbing and restoring the historic jailhouse across from the new Courthouse. Not only that, but the building is well on its way to becoming a full blown “museum” of exhibits that will showcase the history and educate the public on the deep and rich history that runs throughout this area.

Sprowl, with a career in the window coverings industry, was giving a talk on genealogy for the local Historical Society, when Barwick, also the City’s Special Projects Director, stopped him in the parking lot and essentially said “Where do we go from here?” when explaining the opportunity of restoring the old jail house.

From there, the seed was planted.

Barwick begins, “We knew the building was out there, but then began the trek to figure out how to get the building. The old No 9 trail started my search for history as I did the trail amenities signage, and it got me digging into it, and got me finding more and more things.” Sprowl jumps in, “I always wanted a museum on Main, and things are meant to happen, so I trust that’s why we met.”

Barwick continues, “We talked to a few of the commissioners in the County, and they gave us some guidance, and then we made a presentation once we figured out what our vision was. The County wanted to do something with it, but weren’t sure as that’s not really in their wheelhouse.” Sprowl adds, “They were positive. They liked the idea, they wanted a few things from us to finalize things, and they wanted to make sure we had all our ducks in a row. Tom Frost Sr backed us with our business organization (501), and they voted yes, and put together the lease for it. It’s a 10 year lease with a renegotiation clause. They’re extremely pleased with what we’ve done with things so far and we’ve had a blast honestly.”

Once the lease was signed and they had the keys, the real work began and they knew quickly they were in for a lot of it. Sprowl continues, “It was a mess coming in here. Once you start tearing into things, it’s scary. Once we got into the ceiling, we found some of the real issues. We realized that this was going to take a lot of money. The county has funded a lot of the improvements on the inside. We had some funding to use and we took it back to the bare bones with new plumbing, new electric, etc. They were very open to it and as we did it, we’d show them our progress. So much of this was sweat equity – we called in a lot of favors. The amount of money this would have taken would be astronomical. Now that things look closer to completion, it’s gotten easier to get support and we’re extremely grateful for that help.”

With the two men doing the overwhelming majority of the actual work on the building, its become a bit of a labor of love for the two of them, and its apparent in the way they talk about it. Sprowl explains, “We’re saving Kendall County history. We want the newer people to come in and learn about the history of the area. We’ve brought a lot of people through and we learn from them about what they want to learn, what is interesting to them. A lot of people know nothing about this area’s history and we’re trying to fix that.” Barwick agrees, “We’re working with the ISD and we want to educate our kids so that they can learn about the history of their town as well. The newcomers also – they NEED to know these things.”

Originally built in 1887, several of the exhibits feature artifacts from the early inhabitants of the building, including early sheriffs and their spouses, who often would cook for the inmates. Local collectibles, papers, receipts, and photographs adorn the walls and display cases. However, as it’s a jail, the pair know that many are intrigued by that portion. “Everybody wants to see the jail. We have a lot of other stuff in here with the exhibits, but we know the jail is a big draw,” Barwick says. But the ever-growing collection will become just as big a draw. Sprowl adds, “If people have any heirlooms or artifacts, please call us. We’re always on the lookout for exhibits, and we know it’s out there. We know there’s some great stuff out there, and we’re looking for it. We’re looking for items and themes that are super interesting and we hope to find it so that we can all enjoy it.”

The museum is waiting for some warmer temperatures and a bit calmer “COVID climate” before deciding on set tour hours, but the duo is excited. They conclude, “Contact us for tours and information. If we’re here working and somebody stops by, we love giving the tours. We are waiting for a bit of structure in our world before we can create a lot of structure with our hours and tours. We’re doing a concert, a car show, and we’ve got a lot of cool ideas for hopefully this spring when life calms down for us all. But until then, we’re going to keep working on things, and can’t wait to show it off to the community.”