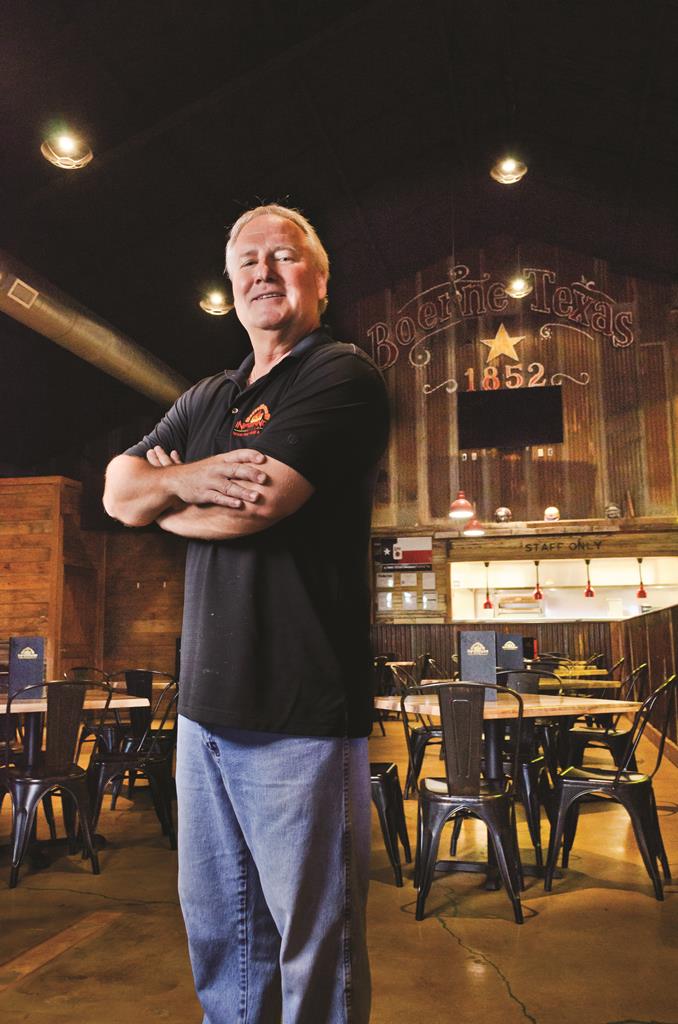 Cary Hamer, owner of Inferno’s Wood Fired Pizza in Boerne is no rookie when it comes to restaurant operation. With over 30 years in the food and hospitality industry, he certainly knows his way around a restaurant. While his motivation as an owner is for the success of his restaurant, at the end of the day, it’s equally about maintaining the joy he finds in the smiles he finds in his customers.

Originally from Iowa, Hamer was quickly relocated to Texas and has been here ever since. Jumping into the restaurant industry in 1980 with fast food management of a variety of franchises, Hamer then transitioned into bar management where he spent the next 4 years. From there, his career path began to materialize.

Hamer begins, “I was with Mama’s restaurants where I was GM of the one on San Pedro, and became a multi-unit manager of the Hofbrau – Mama’s was right next door to the Hofbrau and I ran both of those. I was with them for 13 or 14 years.” From there, Hamer was hired on with Hooters, and his career really began to take off. He continues, “I started off as a Manager in Training at the Riverwalk location, and with a little help from God and some great people, I worked my way up to VP of Texas Operations. We were the number 1 franchise in sales and the number of units at that time. We were able to grow that from 8 stores to 42 during my time there, and it was a wonderful 17 years. It was such a great job and company. There weren’t any other restaurants like them at the time, and so we were the only game in town. You were kind of a rock star running around with a Hooters shirt and people always had a funny story about coming there. The travel and the opportunities it opened for us were just great. You also get to buy into Hooters as management, and so when I moved on, we were able to get bought out. That ownership mentality was just wonderful and it made it so that the employees bought into the whole company and was wonderful to see what it did for people and their families.”

And that’s exactly what Hamer is trying to do at Inferno’s.

“I knew I was going to leave Hooters, so I got the Gruene location going. I want to be in the restaurant with the people and the staff, and those opportunities were getting hard to come by at Hooters. I was motivated to get Gruene going because I really enjoyed that whole lifestyle that Hooters gave to me.” So after opening his Gruene location in 2014, Hamer was able to go back to his roots a little bit and focus on the business itself, and the families that frequent his locations. “Hooters was male driven, obviously. With Inferno’s, I always saw that it would be a family demographic and I always wanted to have that. Everyone loves pizza, and I thought that the concept would fit with what I wanted to do. I got with one of my beer reps and I wanted to find something that would set us apart – and he was just in Houston and somebody got him to try a scorpion pepper. We sourced it, brought it in here, and we started playing around with it and we’ve trademarked that name – Scorpion Pepper – it’s in our sausage, spicy pizza sauce, bloody Mary, and we’re messing around with a scorpion pepper brownie.”

With his Gruene location going well, Hamer explains, “I was having a blast with the Gruene store because I was back in my element. I got it rolling pretty well and took some time to travel, and then the opportunities here in Boerne popped up. When this location became available, I jumped back in and have been all over it.” Opening in early 2019, the location was met with curious patrons, and Hamer’s team has been up to the task. “The staff here are some of the most polite young men and women that I’ve ever been associated with, and that’s the straight truth. Usually in this industry we have to teach kids to say THANK YOU, but these kids have been amazing and that’s a testament to the families here.”

Speaking of the families, Hamer is having the time of his life meeting the local community. “I just love interacting with the guests and meeting the new people. Talking to these kids just keeps you young. I love being in the conversation and the interaction with people when they come in. I just love walking around and talking to people. I just love working, honestly – it’s a party here every night and families come here to forget their woes for a little bit, and I love being able to provide that. Boerne has been great – we’ve already got some great regulars – I’ve met so many great people here in town and it’s been so welcoming. The school has been so supportive of us, and we’re looking forward to doing more of the work with the local schools and groups and we’re so motivated to just do what we can to make the community better.”

With locations going up in Dallas and in North and South Carolina, Hamer has his hands full. While he still focuses the majority of his time at the Gruene and Boerne locations (he lives equal distance between both), he has big plans to grow his concept. But at the end of the day, while it might be “work”, Hamer is having a lot of fun. He finishes, “The philanthropy side of this is very important to me. Not only to the community, but to our employees. I had a pretty sketchy upbringing in the bar business, and the good Lord pulled me from all of that and has given me some great opportunities to grow and to give back. Somewhere in there is my mission, because I have to give back. That’s really why I get up every morning to do this. Being around these kids and these families is what keeps me going.”