Home Art Of THE ART OF ILLUMINATION 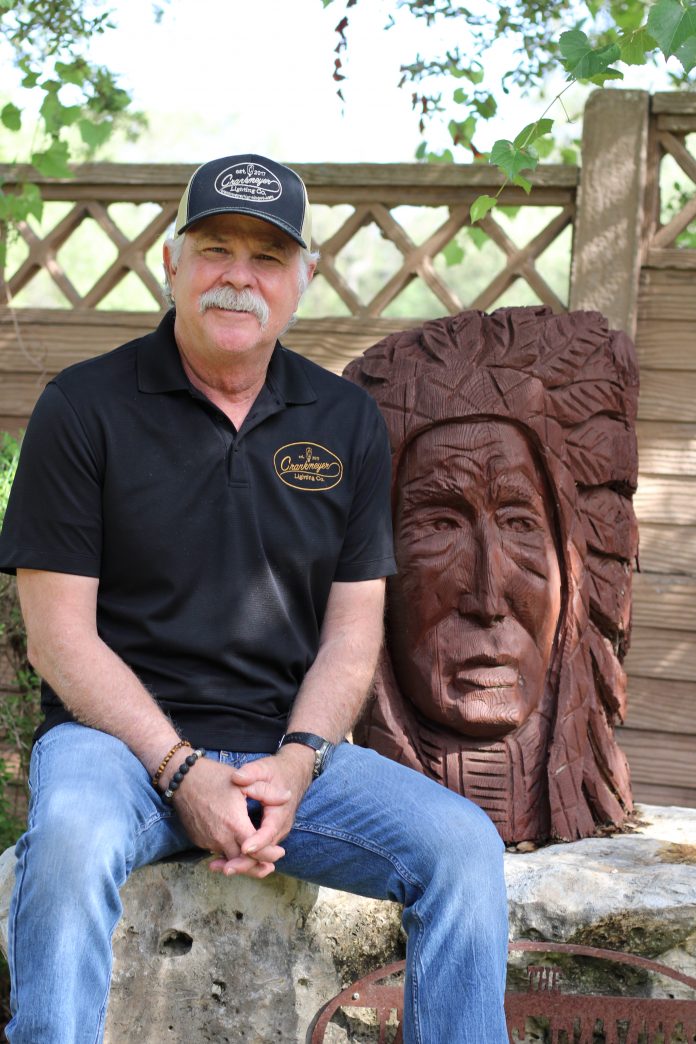 Grant Jacobs, owner of Crankmeyer Lighting, puts a positive spin on salvaged materials and creates some of the most unique custom lighting creations you’ll find. Each one hand-made, they are customized works of art, and created with pride and passion. Jacobs, working out of his home studio, is focused on taking the ideas in his head and re-inventing custom lighting for anyone wanting a piece of art that you will find nowhere else.

Southern Californian by birth, Jacobs began his career aspirations aimed at working in the fire department. A highly competitive industry that Jacobs thought might be difficult to break into, a comment from a friend changed Jacobs’ career direction: “I had a friend who was 10 years older than me and he was a deputy marshal with the police department and he said ‘Come take the test and I’ll get you hired’. And he did. So for the next 20 years, I worked as a police officer and loved it”.

However, the physical toll of police work caught up with Jacobs. He continues, “I was chasing a guy early on in my career and I hurt my neck. Over the course of the next 15 years, it complicated and became a ruptured disk and ultimately I had to have surgery and it ended my career”.

Upon his unplanned retirement, Jacobs and his wife Pam were invited by Grant’s sister to come to Boerne and start a business, which was Enchanted Springs Ranch in 2003. A successful venture by all accounts, the Jacobs decided to move on to new challenges in 2009, and as Jacobs laughs, “I wanted to just get out and find myself!”

“I sold insurance for a while. I dabbled in that and realized it wasn’t for me. I was involved in a couple of other businesses during those years, including a water restoration equipment company. I worked doing business development for another couple of companies and was laid off in June of ’20 from the pandemic, and I had hit sort of a crossroads.”

As Jacobs considered his possibilities, his son reminded him of his passion for creation of the lighting. Jacobs explains, “My sister and her husband lived on Enchanted Springs Ranch and they had an ox yoke light and I was so fascinated by it. I realized I could potentially do it better and improve it and I began designing my version of the lights in my head. I really enjoyed the creative process. Steve (brother in law) ordered 2 more ox shields so I made one for him and one for me. And I just started doing exactly that. And honestly, I found that I loved it.”

So on a random evening on the back porch a few years later with his son, considering his next career moves, he was encouraged to let his creativity drive the way. “My son just said ‘Dad, what do you have to lose? Do your lights! Commit to it for a year and just see what happens!’ I considered it and realized that one of my favorite parts of working at Enchanted Springs Ranch was the part where I was building things all the time and getting to be creative so I decided to make it happen.” 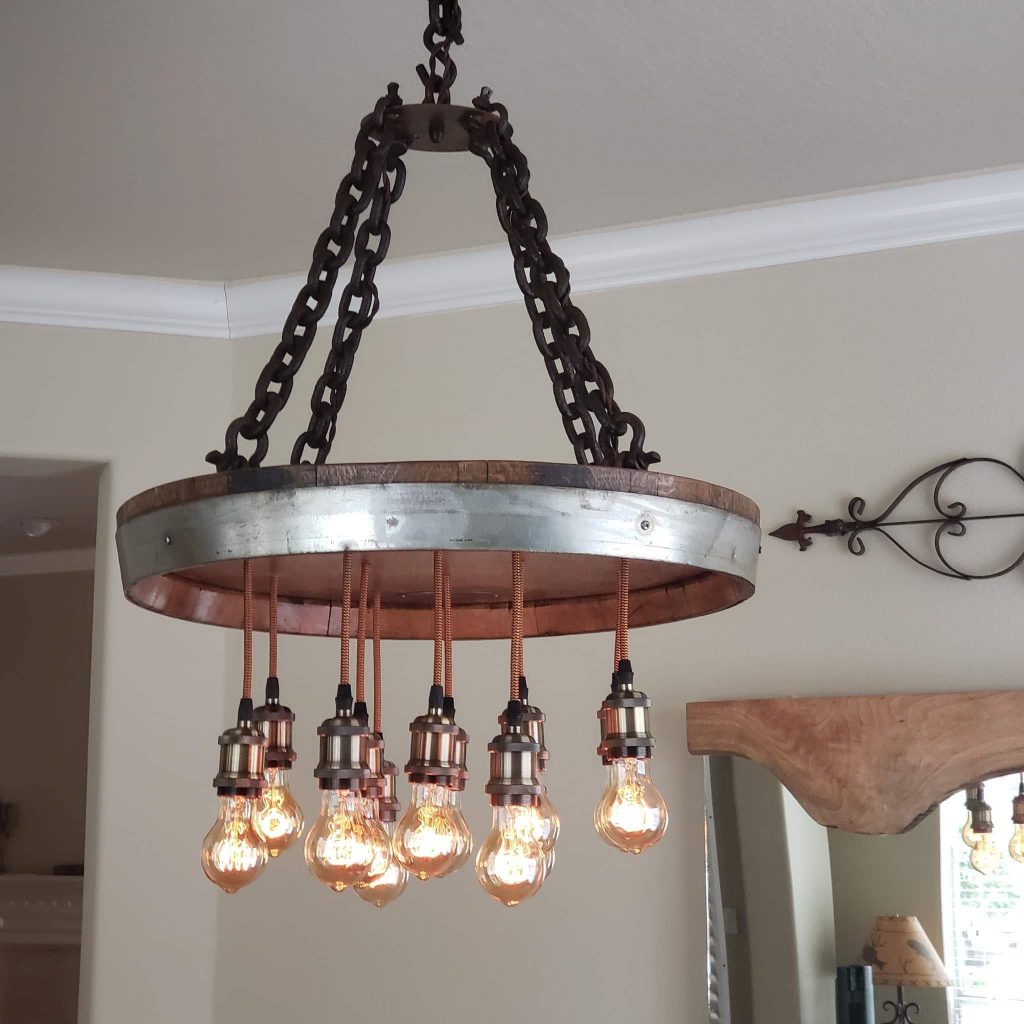 Quickly, Jacobs secured a spot at Fredericksburg Trade Days and has been going since that summer of ’20. “It’s more of an awareness thing for us because people aren’t buying unique lights like we create on a whim. Instead, it’s been straight custom orders for the past half year which has kept me busy. That, and our commercial clients I’ve found.”
The uber-popular Compadres hired Jacobs to create a menu sign with lighting, and then there was another order from Free Roam Brewing Co. “Free Roam happened just from perseverance! I was introduced to the owner while they were still in the planning stages along with his staff, and began working with them. Five total lights have been installed now, and I am working on more. I made the signs behind the bar and a plaque for him by the podcast room. They’ve been great clients. And then Assemble Cocktail put in an order – she asked if I wanted to hang my lights up in her studio, and she said she’d advertise them for me, and she has. She has sold several, so that location has kept me busy as well.”
As Jacobs begins to increase his customer base, he is trying to work his way into the custom home building market and to work with their design teams. “It’s been a hard business to run, and I’m not hoping to make a ton of money – I’m a one-man operation, so it’s going good, but yeah, I’m working hard! But having fun!”

And that fun is evident in Jacob’s zeal for his vocation, and the ways that it benefits him emotionally. He explains, “I love the creativity part of it. I’ve been told to make multiples of some of my designs, but I struggle with that. I might make 1 or 2 but then the creativity part of it goes away and it’s harder for me. In addition, I just love meeting people. We meet so many people in Fredericksburg at the booth and we make friends out there and that’s just absolutely my favorite part – just talking about life.” 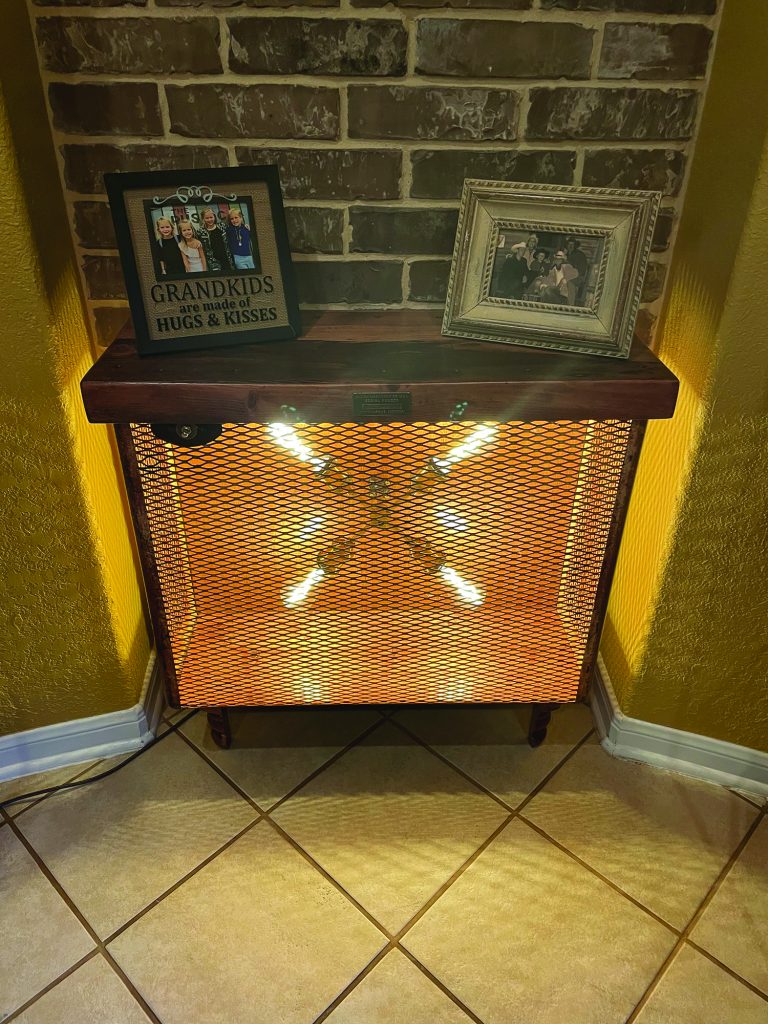 And LIFE is very important to Grant and Pam and their grown children, all of which live locally. “We live here with our 3 kids in town and 6+ grandkids with one on the way, so that’s our life to be honest. Our kids are everything. This is my retirement and I’ll probably work until I can’t work anymore. We’ll be here in town for as long as they’ll have us. Our faith is the center point for our lives and we believe that for most of the community, it’s the same. We wouldn’t be married if not for it. We are involved in Currey Creek, and that faith raised our kids and had us move through issues in our marriage that we probably wouldn’t otherwise. We strive for that to manifest with our community and for those relationships to simply grow and get even stronger. We cannot speak highly enough of this community and to what it has meant to us, both personally, but also to be able to grow those relationships professionally…it’s truly been a blessing.”