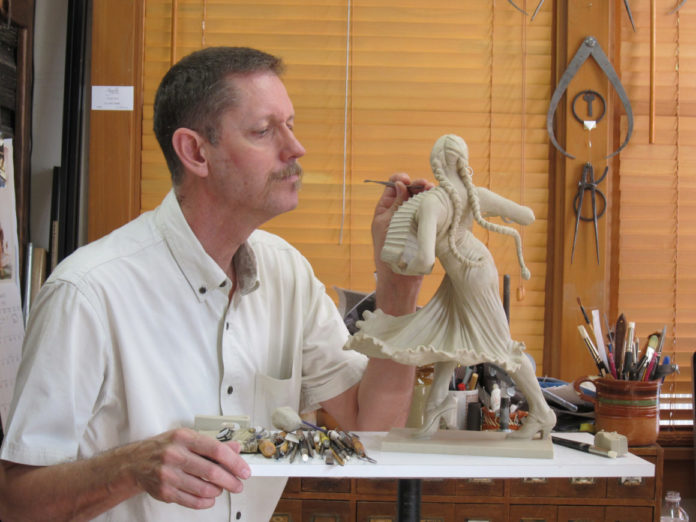 In a luxuriantly landscaped yard next to a charming 1880’s Sunday House in Fredericksburg stands a bronze statue of Annie Oakley kneeling beside her cherished dog, Dave. Surrounded by thick foliage and towering trees, an old cedar pavilion behind her provides an authentic rustic touch to the life-sized sculpture of the famous cowgirl. Created by award-winning sculptor John Bennett and titled Little Sure Shot, this magnificent piece is breathtaking in its detail. The young sharpshooter’s face is expressive and meticulously drawn: prominent cheekbones, strong chin and jawline, even thick eyelashes and shoulder-length hair. The dog’s fur, wavy and long, actually looks real enough to stroke—and many visitors to John and Cathy Bennett’s Agave Gallery Fine Art pause to do just that.

This sculpture is the perfect introduction to a self-effacing artist who isn’t really comfortable talking about himself, preferring to let his work speak for him. Little Sure Shot is more than articulate. She represents talent beyond words. 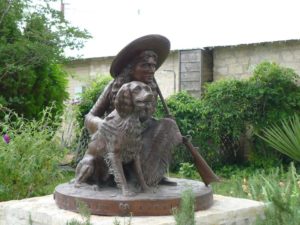 During a tour of his gallery and studio, John explains that he didn’t always want to be an artist. In fact, he never even thought about it. He didn’t know what he wanted to be when he grew up. And, even after he grew up, he still didn’t know. Nothing seemed to hold his interest for very long. He thought that since he had been in 4H while in school in Houston, perhaps a major in agriculture might be a good idea, but he only lasted a semester at Texas Tech University in Lubbock before dropping out.  He enrolled at North Texas Farrier’s School in Mineral Wells, thinking he might learn how to shoe horses, but that turned out not to appeal to him, either.

Still, one thing led to another, and while working with anvils and coal-fired forges, he became fascinated by the related art of blacksmithing.  By the time he graduated he had produced several wrought-iron pieces that others thought were remarkable—but John didn’t.

“See, I never realized I had any ability at all,” he explains with a shy smile. “But when I looked at other people’s sculptures, something inside of me just told me I could do that.” He chuckles and adds, “I couldn’t, but I thought I could. So, about 40 years ago, I picked up some clay and made a little fiddle player for my dad for Christmas and had it fired. It wasn’t very good, but that’s how I started. I just did it. I was in my thirties before I thought about sculpting seriously.” 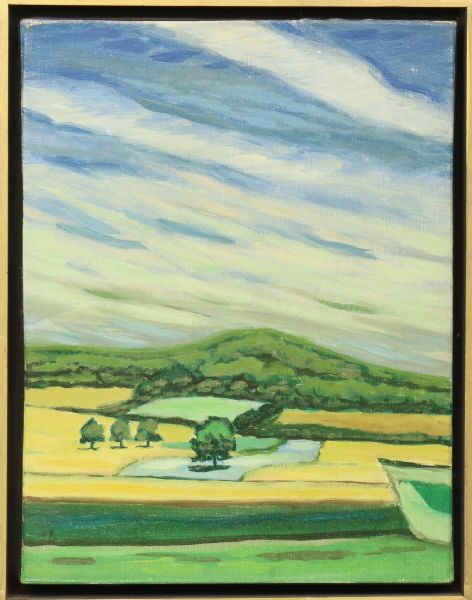 lesson, and has only attended two art workshops in his life. Because he’s self-taught, he says, he doesn’t have the foundational skills of more highly-educated sculptors. “I’ll stare at something for a long, long time until it looks right,” he explains simply, “instead of approaching it with some technique or methodology. It usually takes me longer.”

Although he’s a fourth-generation Texan, John’s a long way from a cowboy. Still, he wore boots to school when nobody else did and always loved horses, even though he was pretty much a big-city boy, having been born in Dallas and spending most of his youth and adolescence in Houston. The only explanation he can come up with is his early childhood memories of The Lone Ranger, Roy Rogers and Maverick on television, and his father’s tales of being in the 112th Mounted Cavalry Unit during WWII.

“They were the last mounted cavalry, so I grew up with my dad’s uniform and his stories. I loved that whole horse thing.” Then John grins and adds, “But the only cowboy in my family was my sister’s husband.”

Regardless, every piece with his name on it has a western motif.  There’s a cowgirl spinning a lasso with so much gusto she looks like she’ll leap off the table, a nearly-completed work-in-progress depicting a whirling woman playing an accordion, and a cowboy hanging on for dear life to a bucking horse. There are buffalo, jackrabbits, longhorns, and roadrunners—all significant to western folklore. Limited edition busts of Texas Ranger Gus McCrae and Woodrow Call of Lonesome Dove fame grace a display table and are so realistic they can be recognized from across the room.

John Bennett’s first life-sized cowgirl bust was that of the 1920’s bull rider/rodeo star Vera McGinnis, the original of which now sits in The National Cowgirl Museum and Hall of Fame in Fort Worth.

“Even though I had done a couple of cowboys and a few little critters in the past, I saw a photo of Vera McGinnis in a book and she fascinated me,” John explains. “I found myself really drawn to the cowgirls. Because of her I started doing more portrait-type pieces. We all have such infinite variations in our faces making up emotion and identity—that fascinates me still. Vera opened the door to what I do today, what I call ‘romancing the west.’”

While John often photographs people in motion, they’re seldom strangers because he’s shy and doesn’t want to bother anyone he doesn’t know. Yet he says he has no choice but to use a photo because it takes him so long to get what he wants. Then, because he can’t draw (or so he claims), he has to begin by building the piece in clay so he can see it from every angle. Finally, it will take him two or three months to complete the work, and another two or three months for the foundry to finish the bronzing process—which, John claims, is an art form itself.

Keeping this complicated procedure in mind, a bronze sculpture of a strapping Native American warrior firing off an arrow while atop a rearing horse is a particularly amazing piece, partly because it’s smaller than many that John exhibits. The muscles in the Indian’s body ripple and bulge as he pulls back his bow, and the power and speed of the horse is nearly palpable. The same is true of a cowboy on horseback being attacked by a longhorn bull: through long, loose, flowing lines, John depicts in-motion power, tension, and imminent danger so intense the viewer actually gets chill bumps.

Although John Bennett’s work is highly respected and even celebrated, the story of Little Sure Shot, that magnificent life-sized statue outside the gallery, illustrates how much of his career has been more fortuitous than strategic.

“Annie Oakley stayed in a little town in Florida called Leesburg—she, her husband, and her dog, Dave—in between the Buffalo Bill Wild West shows,” John explains with a grin. “So the Friends of the Leesburg Library wanted a statue of her with her dog to recognize her historic link to them. My brother, who lives in Florida, asked me to come out to do a few art shows, which I did, and that’s how they became aware of me. A committee asked me to do the sculpture and now the original Little Sure Shot sits in front of that library.” In 2007 the mayor of Leesburg gave John a key to the city, an honor he never expected.

In 2010, in recognition of his exceptional work and outstanding commitment to the arts in Texas, John received an even greater honor when he was designated to serve as Texas State Three-Dimensional Artist by the 81st Texas Legislature. Sharing the excitement with poet laureates and Texas state musicians—including Willie Nelson—was a high point in his career.

Although John has received numerous awards during the last several years, these accolades aren’t most important to him. What he finds far more rewarding now is his ability to encourage people to persevere in whatever their passion is. He likes to use the fact that he’s completely self-taught—and began his work in his later years—as a tool to inspire others.

“I’m not a teacher or a good speaker,” he says seriously, “but I try to speak from the heart. People come into my gallery and they see in one quick glance what it’s taken me years to build in a body of work, and they think: I can’t do that. They turn inward. They tell me they haven’t discovered their gifts, so I’m able to encourage them. I really like that. I tell them that if they find their passion, they’ll find their gift. That’s what life’s all about, isn’t it? No matter how old you are when you start, your passion will take you where you want to go.”

MOORE ON ART: Bradley Smith and his Team

Stroll on Down to the 10th Annual Boerne Art Waddle