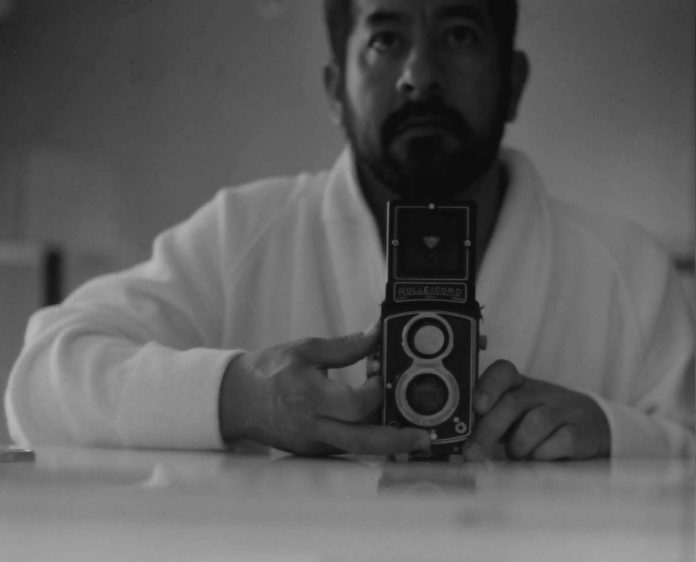 The Magic of movies is never truly understood but the art of movie making is complex. One sees the end product after many months sometimes years of filming, proofing, editing and it all begins with a few words on a paper. A thought or a quote or maybe even just a partial sentence. Boerne has a local celebrity in the form of a movie producer. A movie producer is defined as someone who oversees the production of the movie. The producer is responsible for ensuring the movie stays on budget and on schedule. The producer is also instrumental in locating funding, locations, actors and securing lodging and food for the filming duration. Roy Montez is such a person!!! Roy is a local young man who has chosen movie producing, writing screenplays and a film career as his life’s path. Boerne is lucky to have him here to pursue that dream.

Roy recently produced a movie titled “The Transcendents” that was shot partly in Boerne, Tx on a private ranch and partly shot in Austin. It resolves conflict during a musician/songwriters life. Currently, the movie can be found on Netflix, Hulu and some other movie media like Amazon. Roy is also credited with producing The Waltz and Dragonfly. He has acted but his true title is cinematographer and producer. 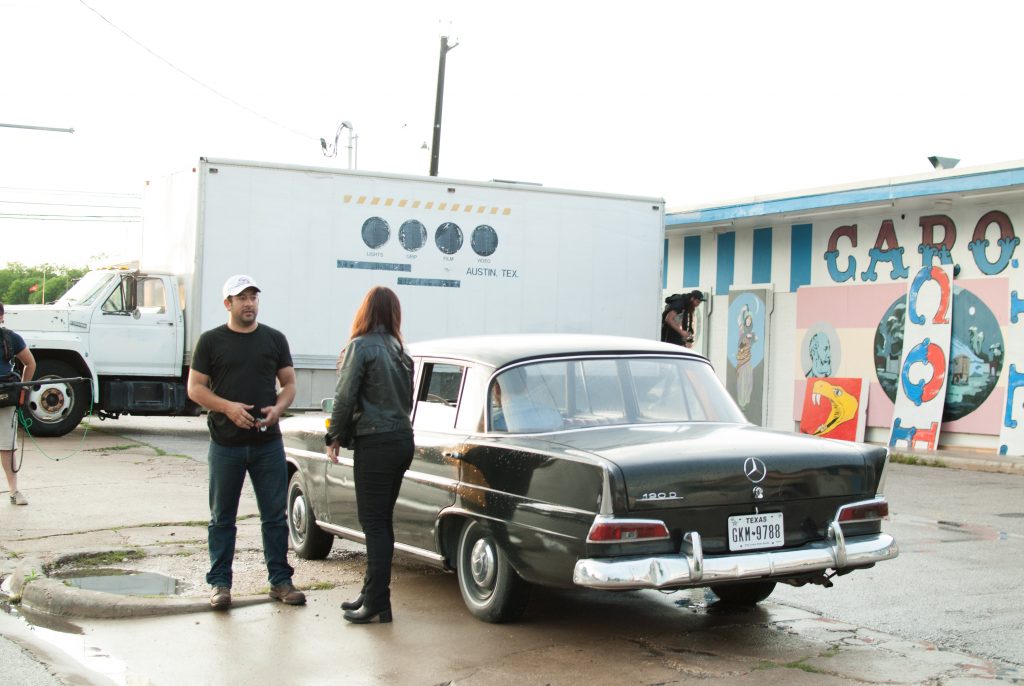 Roy’s friend and co-producer is Derek Ahonen who is a co-writer and resides in California. Derek and Roy enjoy writing together, producing, directing and acting in the films. Derek will contact Roy with an idea, script or plan and Roy goes to work. Many times Roy himself co-writes with Derek tag teaming chapters of the screenplay balancing their creative minds to engage the audience in their imagination journey on screen. Along the way actors such as Cathy Valentine of the GoGos (retired) are cast to portray lead characters. Cathy is currently co-starring in The Transcendents.

Roy has always enjoyed the more creative artistic side of life. Roy loves the art of the movie making and his contribution remains true to its art. Roy has written, produced and filmed several of his own short films including The Janitor. 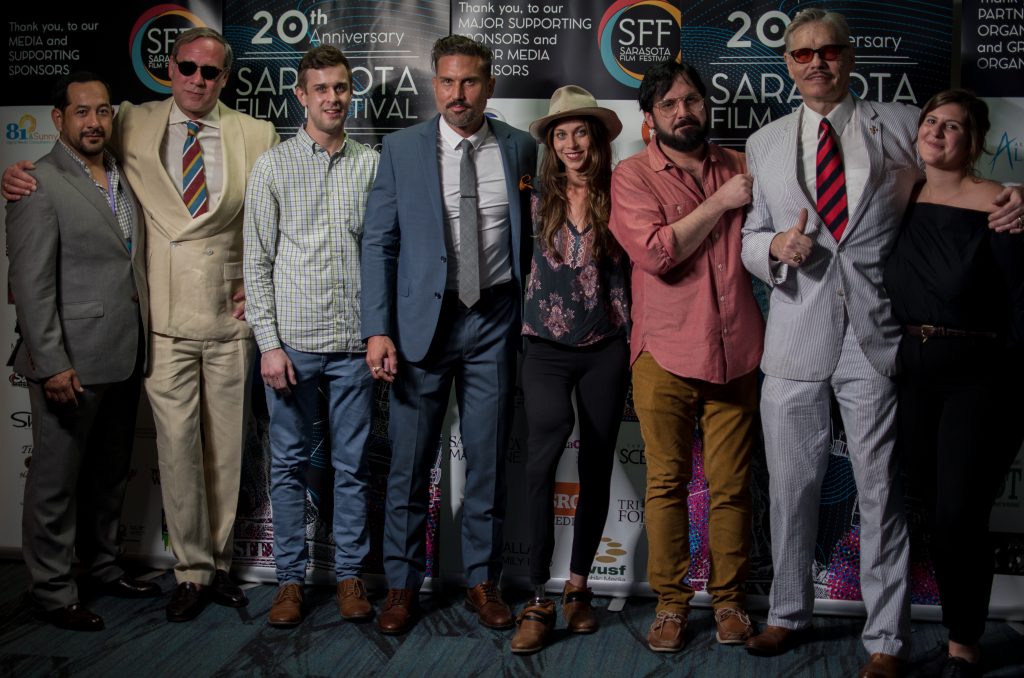 Roy’s participation in movie making began in his younger years. He got into drama and theater in high school and decided he wanted to be a writer which of course naturally led to film. Roy started in theater and stayed for more than 20 years.

Schooling for writing, acting, crews and production are available and Roy and Derek met in their search to perfect the art. The chemistry sparked between them as a team when Roy produced one of Derek’s plays and they knew that if they combined their individual talent they could produce some spectacular movie art and yes they have!!!!!!

He dabbled in writing scripts and found it an extreme joy to tell a story relying on the audience’s reaction to the story through emotion, visual and audio. Music is a decisive tone for telling the story. Emotions from the actors set the story line and locations bring home the tale. Whether true or fiction, art resembles life and the audience can relate to the story on film. Roy has also participated in stage plays both acting and developing. He enjoys film for the ability to plan, utilize resources and creativity. A stage play is prepared for one location with multiple sets easily adjusted during the play’s production. The play tells a story in sequence from start to finish with no pause in the production other than dividing it into Acts which can take place at different limited backdrops and stage sets depicting time. A film is shot on numerous backgrounds, sets and locations and is shot in chunks of story line not in any sequence or order. The entire production crew may be at one location for a length of time shooting all scenes using that location at one setting or back drop. The team then moves to another location to shoot supporting scenes. Nothing is in sequence in film. It is put together in editing. Necessary sounds and music are also added at that time. 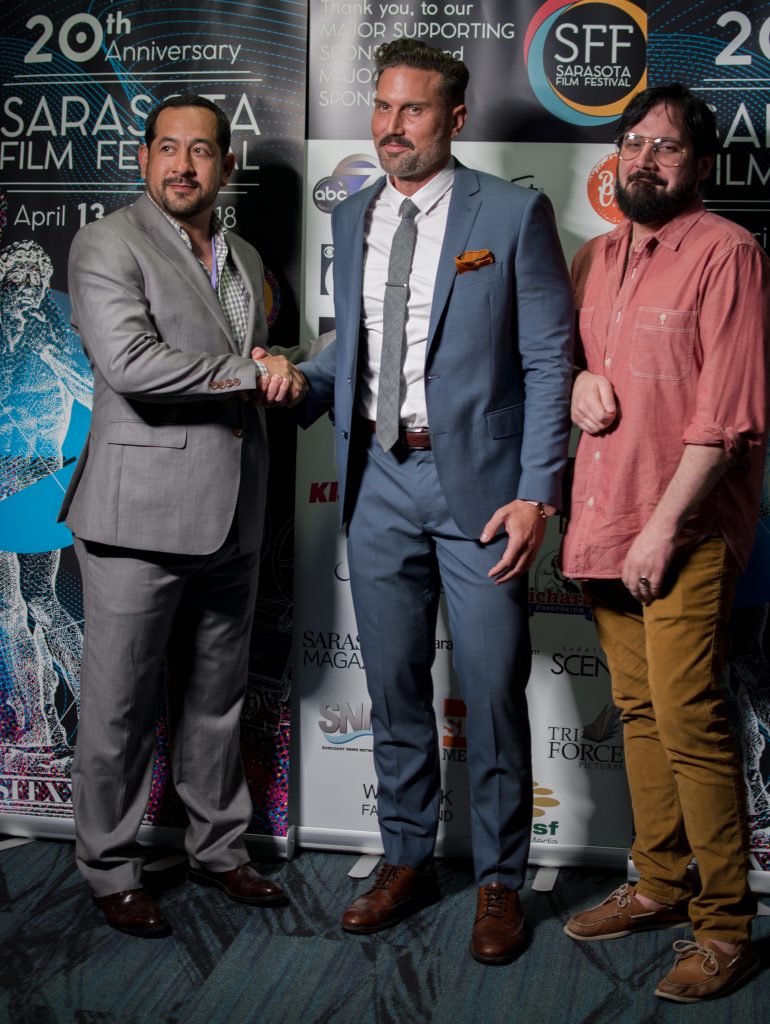 One may wonder how the actors are chosen for a particular film. Roy explained that there is a Screen Actor’s Guild that actors belong to in order to be cast in a film. Roy and Derek choose based on who is in that Guild that they believe may work well in the movie. Roy explained that chemistry of the actors, availability, budget, and of course the actor’s ability to portray the character all play an important part in selection. Extras in the film are not as limited and many from the Boerne area were used in general scenes shot around the town of Boerne in the ”Transcendents”. Rob Franks who is from Boerne is the lead actor in the film “Transcendents”. Many times an actor is someone they know or have used before in films or someone they see has chemistry with the other actors preferred. SAG demands a certain salary and agents work from that number for their clients(actors) negotiating the best money and conditions.

For the movie “The Transcendents”, the actors and crew along with Roy and Derek all stayed at the ranch where they filmed for several weeks. It is important for the group to get along and be able to cohabit in the same location comfortably…eating, sleeping, working and playing in the same environment 24/7 while filming. This characteristic is crucial when casting a film. “The main difference between an actor and a model is that the model must exhibit perfection and the actor exhibits humanity” according to Roy Montez.
Roy must first settle on a script or one he has developed alone or with Derek. The screen play is written and then Roy finds funding. This is not as easy as it all sounds. Financing for films is not always an immediate return. One must invest in films out of love for the art of movies and the satisfaction of how the story is received by the audience. It is also sometimes for the story it tells. A theme that must be addressed through movie or film. It is not a path for making millions right out of the gate. The goal for most film artists is to be chosen for the short film festival. Austin has a film festival that showcases many films. It is an honor and stepping stone to be chosen to be shown in the small film festivals and be seen by many big money producers for a chance to make it to big screen or become a desired piece of work. Sarasota Film Festival is another of the premiered film festivals small films producers cherish.

Roy has 2 children who are learning the business and enjoy Dad’s career path. They are learning the lessons and tricks of the trade and they may choose the path of producer, actor or writer in the future. The writer and producer are thrilled when the story is accepted, understood and enjoyed by the audience for its merit. The best story for financial and reaction are horror stories. Audiences clamor to see them, react immediately to them and seem to appreciate them immensely.

Roy likes to film on set, on location or most anywhere. Some scenes require a certain set or weather or location and securing that backdrop for that scene is important. One scene called for rain in The Transcendents” and there was no rain in the forecast. They were going to have to rearrange the scene or cut the rain and a member of the crew indicated he had a rain machine. Problem solved!! The scene shot as planned and on time within the budget. 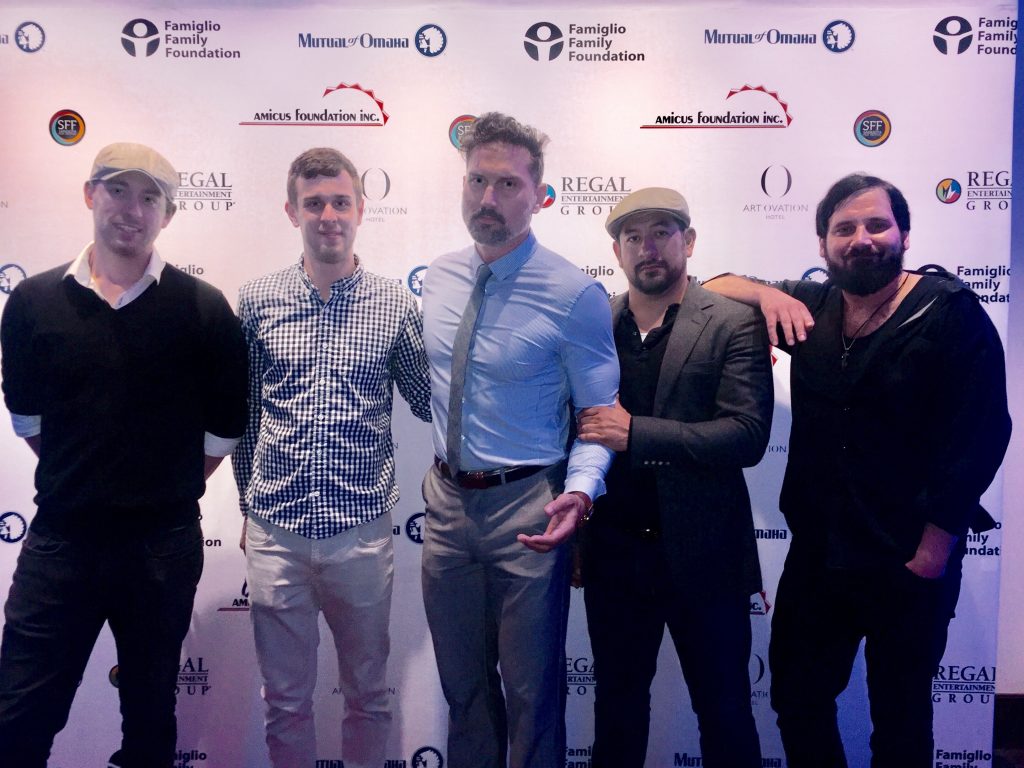 Finding a script is not a planned idea. Roy or Derek will come up with an idea, brainstorm it, then sequester themselves and co-write it. Then they explore options for actors, locations and crew. Roy begins finding suitable funding and the words come to life on film. It may take days, weeks or even months to set the plan in motion. All of it essential to the finished product.

Movie making captures emotion. It affects the audience with the specific music, location and direction of talent from the actors portraying the characters. Roy explained that the best way to connect with the audience is to make them uncomfortable. Pull out emotions that create a distress of sorts. Sadness, fright, anger, even overwhelming happiness.
If one’s goal is to get rich and make lots of money then movie making is not necessarily the route to pursue. Let the art be art and create a career job path elsewhere. The ambition in movie making is to give a story or cause an outlet. Sometimes the voice is more important than anything.

This author would be remiss if definitions were not clarified. At this time definitions of the different types of producers involved in movie making is extensive. Roy is capable of each one and has handled the needs for the films of each producer as needed. Executive, line, supervising, co, coordinating, production, associate, segment and field each have a distinct responsibility necessary for completion of each film.

Roy has settled in Boerne with the intention of pursuing more films in the area. He likes the location and the area. He feels there is so much potential for more talent. He has plans to hold workshops to introduce his industry to the residents of Boerne who are interested. He does not have any current dates but he always has a script in the making whether it is a short story or a longer film option. Watch for his announcements as they will be coming soon. He currently does not have any public contact info but if you desire then you may contact his agent. For information google his name as an actor and join the site for information. You will be happy you did. See ya at the movies!