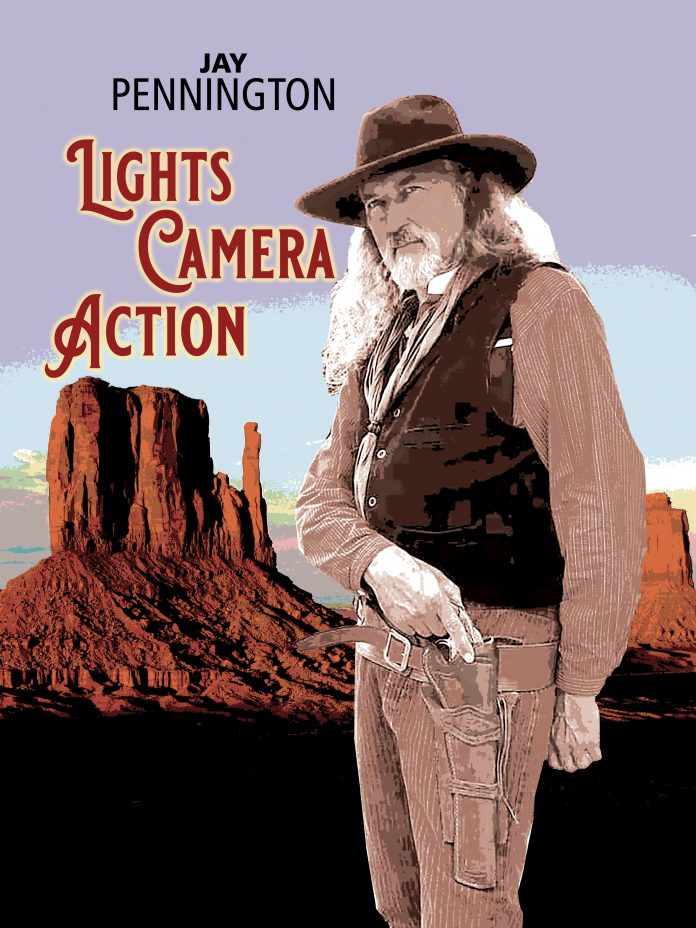 Their first collaboration, Smile, a western, is reeling in the awards. According to Pennington, Smile is a psychological thriller, inspired by the classic Japanese film Rashomon. “It’s a film about what makes a bad guy a bad guy. With a twist.” 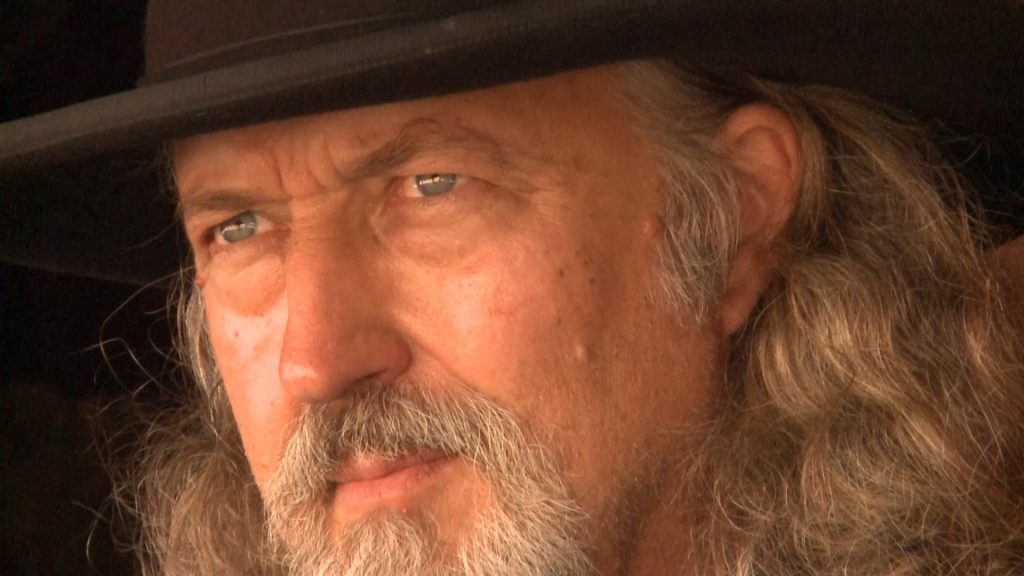 The film debuted at the Wild Bunch Film Festival in Tombstone, Arizona. Pennington recalls, “The greatest thrill for me was when it was shown for the first time. The theatre was packed. It was scary for a bit before it started. Would it be a dud? Would it generate a reaction?

Smile won several awards that night and went on to win ten trophy-level awards in several other festivals: “Best Western” at the Los Angeles Film Festival, and, again, at the Rome International Movie Awards. It was “Best Short” of the entire Butch Cassidy Film Festival in Utah, as well as “Audience Choice Award,” among others. 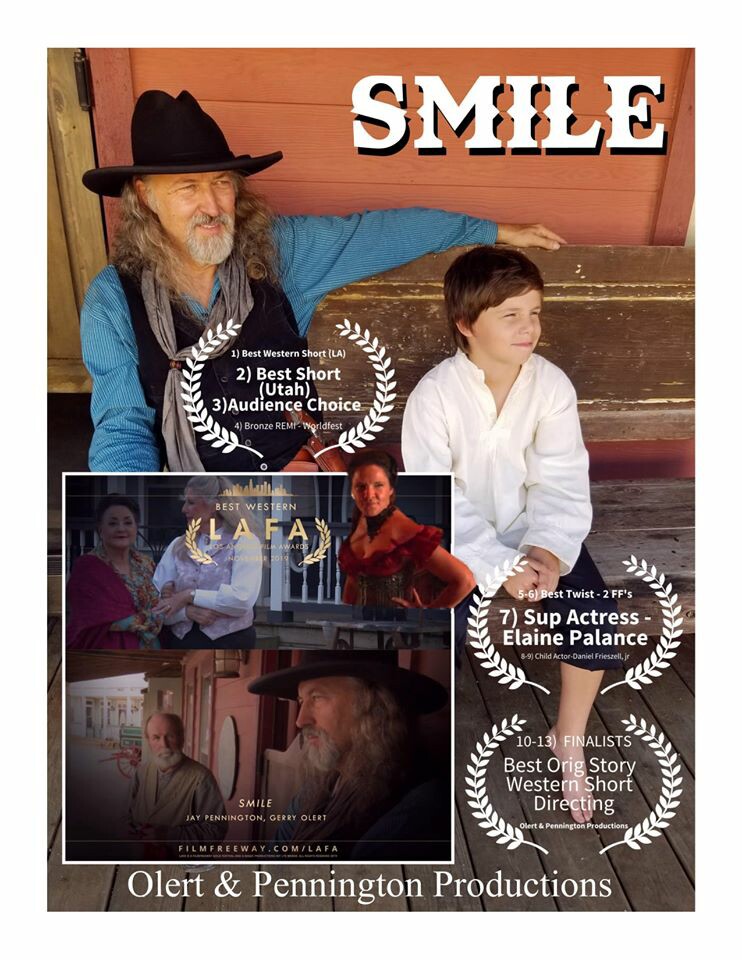 “We couldn’t have asked for a better start to our film career,” says Pennington.

Pennington and Olert then collaborated on their second film, Senior Discount’d, an intense drama inspired from Pennington’s own life. “You write what you know.” The film is about the vulnerable process of aging. “Gerry and I put our passion into making this film. As co-directors, we were able to negotiate the actors to fit our vision. Gerry is the eye behind the camera and does the editing. We team up on the final edit. He and I work well as a team–and on a micro-budget. That says something.” 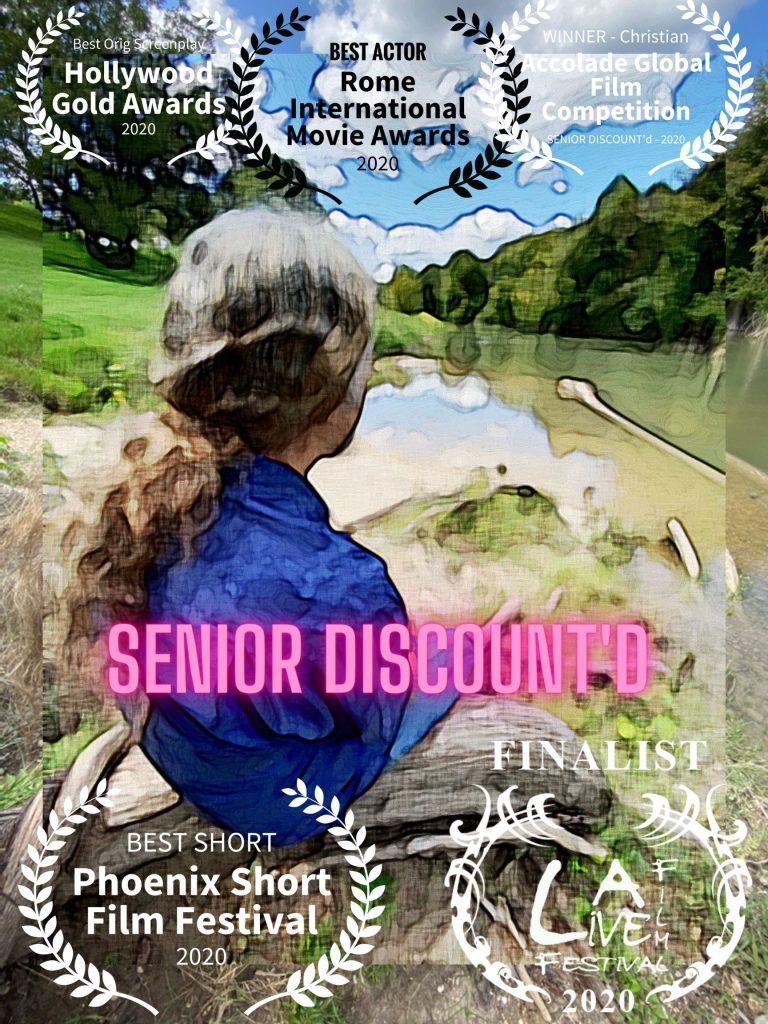 Senior Discount’d has taken off like wildfire. It has been accepted into several film festivals. A film festival may have 1,000 applicants but chooses 100 films to actually show. And Senior Discount’d has already garnered awards. Pennington won “Best Actor” at the Rome (Italy) International Movie Awards Festival. The film was a winner in the “Christian” category at the Accolade Global Film Competition, California. It won “Best Short” in Canada and Italy and Pennington’s screenplay won “Best Original Screenplay” at two festivals.

“Although we filmed it as dramatic fiction, the subject matter can be considered documentary and has been accepted into festivals that accept only documentary films. That’s an honor,” says Pennington.

Acceptance into festivals at Sundance and Cannes is the ultimate goal for Senior Discount’d. 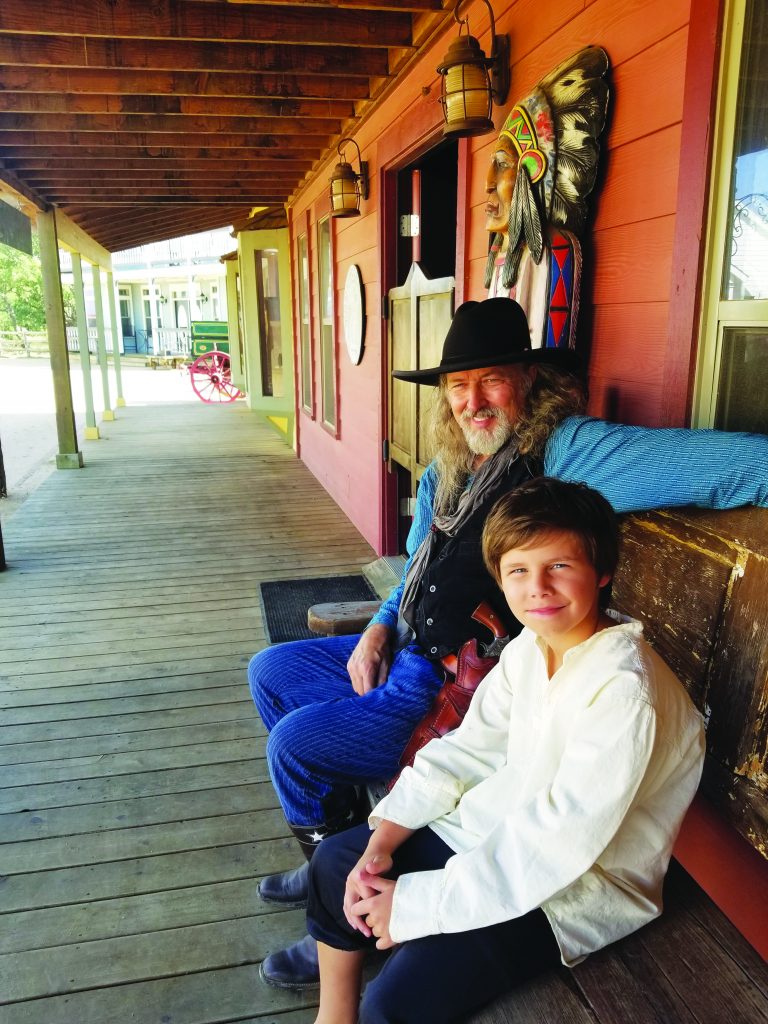 A curiosity and love for film have always been a part of Pennington’s life. He credits the old Olmos Movie Theater in San Antonio for some of his early learning. “I grew up partly in Comfort and San Antonio. The theater was showing a variety of foreign films. Since I had just gotten my driver’s license, I was there taking in all the films I could,” says Pennington. “From Actors such as Daniel Day-Lewis, Gary Oldman, and Alec Guiness were among his inspirations, and he is particularly grateful to character actor Glenn Morshower. “He sent me in the right direction,” says Pennington. “We still keep in touch.” 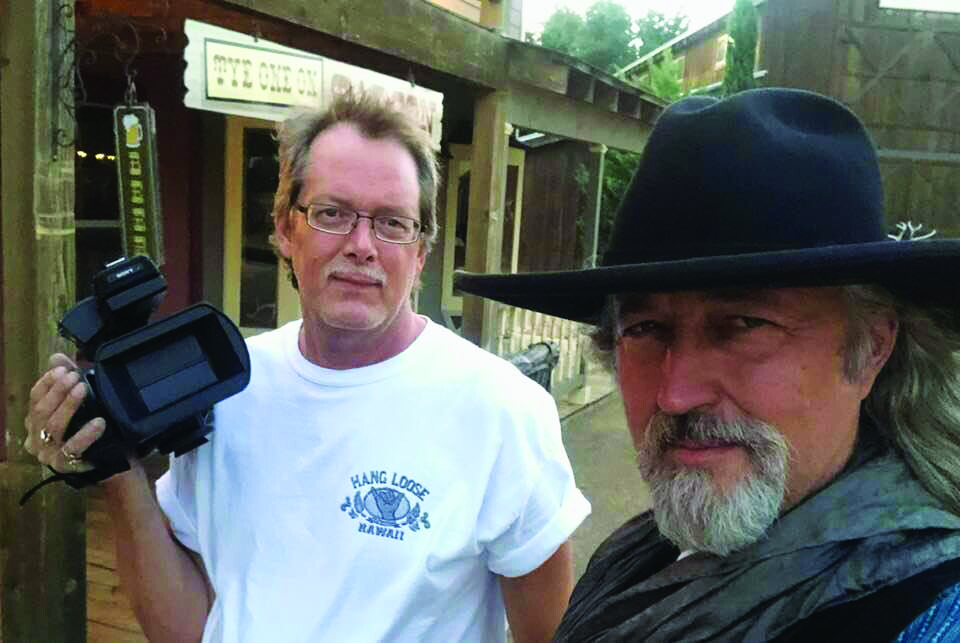 ey to Pennington’s continuing love of film is his collaborator and friend, Gerry Olert – the champion behind the camera and the perfect co-director. Before the filming, Olert will have read the screenplay a number of times. He and Pennington discuss the film’s purpose and camera angles. Never any poor editing or mistakes in lighting, soundtrack or acting: “This doesn’t happen with Olert.”

The two men met at an animal rescue gala several years ago. A lucky meeting, for the two have become an ideal team. Their main objective for each film is to draw the viewers in and not let them escape the experience until the film’s end. “We want the audience to think about what they saw for days.”

And, then, the ultimate compliment from Pennington: “I couldn’t be doing this without him.” 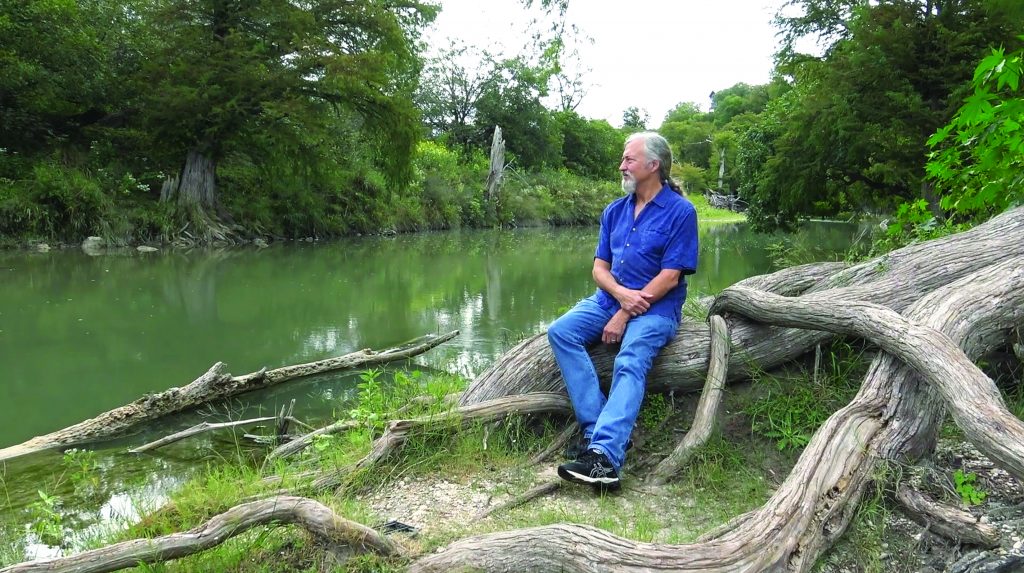 Pennington’s and Olert’s current project is “Vinegar to Honey.” It’s still a screenplay, not yet a film. However, it has already won several awards as a screenplay: “Best TV Pilot” at the Austin Under the Stars Film Festival; “Best Romantic Comedy” at the Austin Micro Comedy Film Festival, and “Best Original Screenplay” in five other festivals. 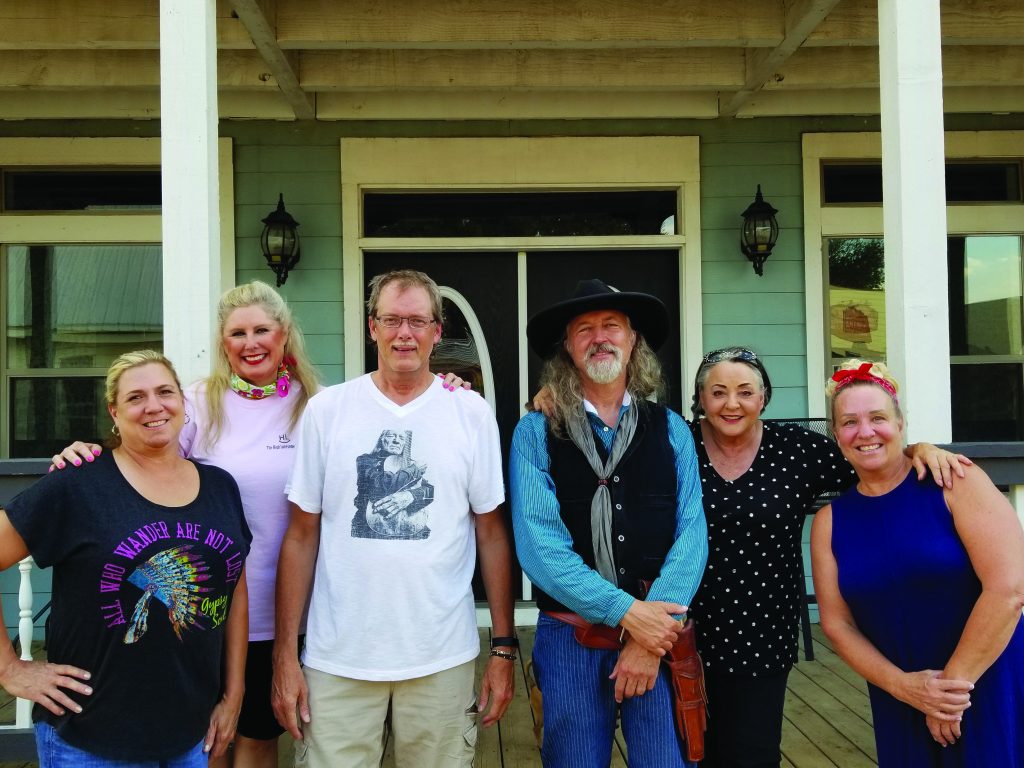 I would love for Netflix to pick up the concept and we continue to develop episodes. We are holding back its filming in hopes of getting some serious investors. It’s a SAG (Screen Actors Guild) based film”

The boy who spent many moments absorbed in movies at the Olmos Theater has grown up to follow his passion. He’s living his life-long dream.