Home FEATURE Musicians of the Month – Hogan and Moss 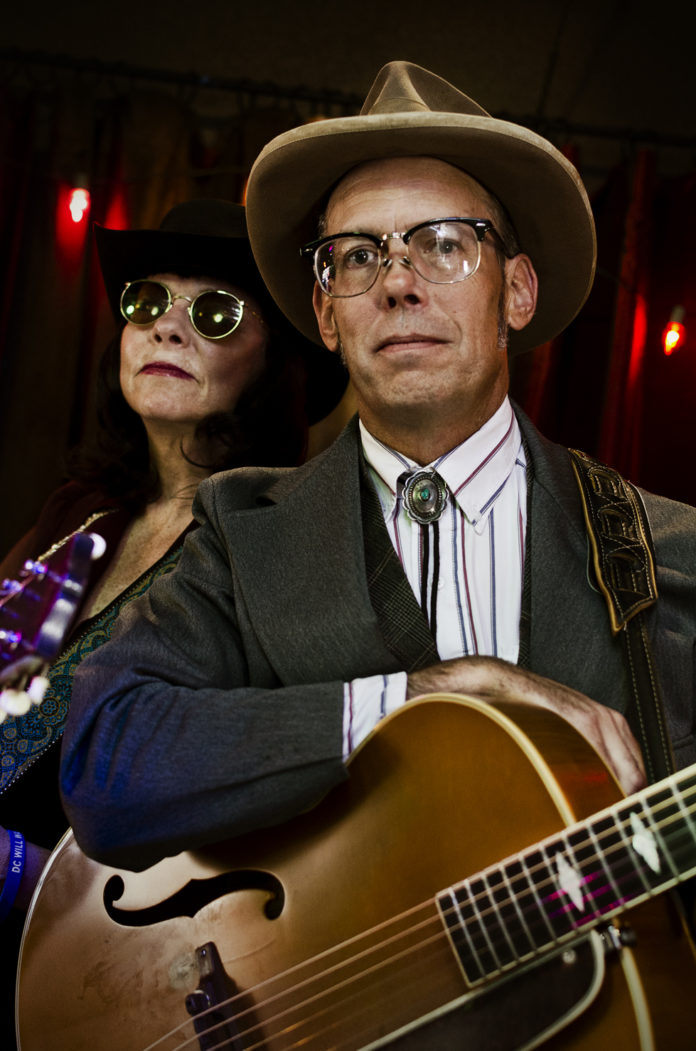 Undeniable. That’s the word that comes to mind when I think of Hogan & Moss. I first was introduced to their music by chance one night in early 2018. Salvador Dobbs had just opened in Boerne, and I was there hanging out after finishing my own show and was over near the pool table talking to some people. 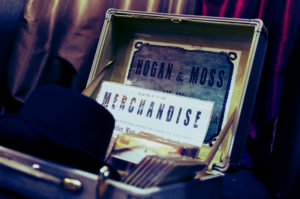 If you’ve never been to Dobbs, from the location of the pool table, the view of the stage is nonexistent. However, sound pierces what the eyes cannot. I remember being mid-sentence when I heard the unmistakable sound of live music start again after the band playing that night had retaken the stage again after their break. Being a true music lover and full-time musician, I can’t help but immediately notice the impact a song makes in an environment, even one that’s crowded and loud where the music can get lost in the cacophony of boisterous voices and clinking glasses.

I found myself unexpectedly grabbed by a song that was unexpected; fresh, yet, timeless. I actually had to excuse myself from the conversation to make my way toward the stage to see who was making this wonderful sound. Rounding the corner, I could see there were a pair of bespectacled folks responsible for this auditory treat, a woman and a man, both playing guitars, the woman providing the sweet vocal harmony and the tasteful musical lead, the man holding the rhythm musically and giving the powerful vocal front.

Jon (Hogan) and Maria (Moss) have been making trips all over this great country together sharing their musical gifts for the last 9 years. They regularly hit many of the US states as they seek to follow the good weather patterns, and have now even begun to make their way into Canada. They fill all the necessary roles of tour managers, drivers, accountants, producers, writers, and players. Covering more miles in 12 months than most do in 12 years, they truly epitomize what it means to be troubadours.

Jon and Maria first met back in 2008. Jon had been playing heavily around the Houston area, mostly solo at that time, and Maria being from that area, had heard his name before they met. As fate would have it, they would both be at The Kerrville Folk Festival later that year where they would meet for the first time.

“There was a guitar class I wanted to take at the festival. I was playing guitar when I was about 13, but it was a lot of years later when I started to take it seriously.” Maria shared more about her own journey, “It was actually after I had breast cancer that I started being drawn to really play in 2004-2005. I had been a journalist for many years, but when I came back from that challenging experience, I now was drawn to picking up my guitars more than ever. Something about having gone through that time changed both the way that I played and even felt holding a guitar.” 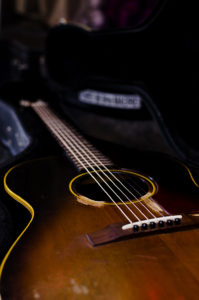 One of the most powerful things about music is that it can not only carry us through hard times in life, it can also serve as a guidepost that redefines what’s most important to us when we’ve come to the other side of a trial. It certainly has done that in my own life at more than one crucial crossroads. It’s always endearing to hear when it has also done that for a fellow artist.

For Jon, it was in his 20’s, after a divorce, that he began his own journey into music. Like Maria, he’d played a little here and there for a number of years, but it took his own personal challenge for the music to really grab a hold of his heart. In the wake of the end of his marriage, he would pen his first tune. It was called “Cheyenne Woman” being that they lived in Cheyenne at the time, and almost 25 years later, that song is still a staple in the shows of Hogan & Moss and the Old Weird America on a regular basis.

“I wrote a ton of songs during that era, of the mid-late 90’s, and none of them survived.” Jon recalls the early years of writing music, “I put them all on tape, I mailed them to myself to copyright them, and I managed to lose them all in the midst of the hard times in between. All those songs from that era are just ‘gone with the wind’ now. What are you gonna do?”

While Jon’s family would move many times before they would settle for a period in Utah, Maria grew up in Houston. “I went to Memorial High School,” Maria shares, “then went on to the University of Houston, studied journalism, and then worked for the New York Times in the Houston bureau. I also served as editor for a couple of city magazines and then freelanced for years. More and more, it was the music that I felt moved to pursue.”

When Jon and Maria ended up finding their way to each other in 2008, there was an immediate connection that just worked, both personally and musically. When you talk to Hogan & Moss at the same time, there’s a powerful chemistry between them both as friends and collaborators. Not to mention, they are both genuinely warm and charismatic individuals. 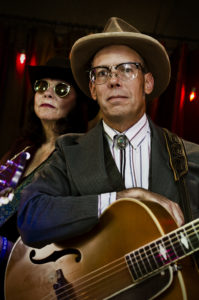 They just finished cutting a new record, “In the Golden West,” which takes its name from a line in a Carter family song found on the record. It has a lot of their staple songs they do in their sets night in and night out. They’ve got a few original songs on it along with tunes from the likes of Jimmy Rogers, the Carter Family, Butthole Surfers, Amy Winehouse, James McMurtry, Townes Van Zandt, and Blaze Foley. If you’re anything like me, that tracklist alone is intriguing as can be.

“The way we went about recording and mixing this album, we really were trying to go for a more forward, punchy, almost in your face presentation of our sound.” Upon listening to the record myself all the way through a couple of times, I find this album to be a great representation of many of the elements of their live shows.

Jon and Maria play more than 250 gigs annually, which is astonishing to maintain year after year. Those gigs range from bars and clubs in cities all over the country, teaching songwriting classes with audiences ranging from young children to those in their twilight years, and even sometimes sees them headlining Outlaw Country festivals like the one in Rifle, Colorado.

They are road warriors and consummate professionals that maintain an attitude of gratitude and lightheartedness in the face of uncertainty and adversity. I cannot implore you enough to see Hogan & Moss and the Old Weird America when they are in the area. There are no finer folks to support in the music scene, and their talent and style are truly undeniable.