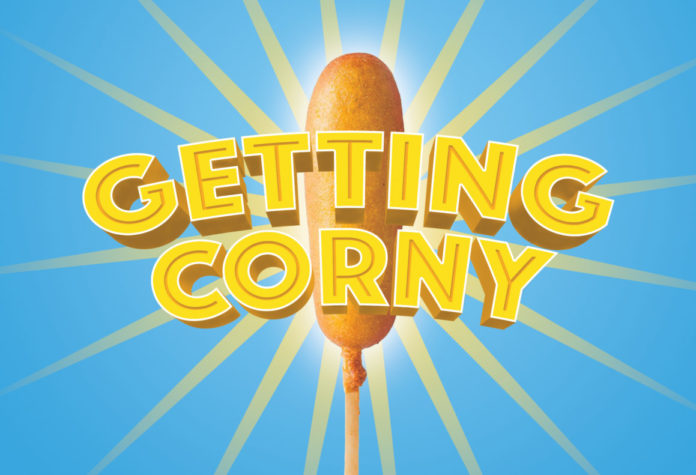 by Christine Griesenhahn
Last month, we discussed Parisa, a delicacy born in central Texas, but virtually unheard of outside a 3 county area. This month, we’re going in the opposite direction. A food item as ubiquitous as a ham sandwich. If you haven’t heard of corny dogs, are you even human?

There are two primary places that claim to have been the birthplace of the corn battered hot dog on a stick we all know, and some of us love. That greasy ambassador of fair food everywhere. One of the claims, by Carl and Neil Fletcher, claims they invented the corndog between 1938 and 1942 at the Texas State Fair. Minnesota vendors claim to have invented the Pronto Pup (the same thing with a dumber name) in 1941. But those were wussified versions of the original, including sticks to make eating them a daintier affair.

Sausages deep in fried in cornmeal batter, but without said stick, were made right here in the German settled Texas hill country in the earliest years of the 1800s. You see, the Germans that settled here discovered that the existing Texans……and brace yourself for this…..did not like their German sausages. Did you catch that? One more time, louder for those in the back or slower on the uptake.

I know, right? It’s unfathomable. It’s crazy talk. But apparently, it was a thing.

So, the Germans did what any self-respecting southerner (they were now southerners) would do. They battered and fried them. Yup. Dipped those weenies in cornbread batter and sold them that way. I mean, as any Texan can attest, if you fry it, we will eat it.

So it seems the cornmeal fried hot dogs were a hit, and obviously took hold outside of the area fairly quickly, with sticks being inserted later by some of the corn dog interlopers. We’re actually thankful for that. Because grease.

Anywho, after the popularity increased, several patents were secured for specialized equipment that made mass production and consistent appearance possible. But have no fear, even without the special doomafotchies, you can make your own corn dogs at home. They may not look as pretty, but you can customize them in so many ways you are sure to love making them.

I for one add jalapeno and green onion to my batter, giving the batter great flavor. Also, it doesn’t have to be weenies. You can use larger smoked sausages, such as kielbasa. One of my favorite riffs on the corndog is a lobster corndog. Yes, I know. Sometimes I am very extra.

Heck, you don’t even have to use meat. Roasted carrots work if you are a vegetarian (my condolences) or try your hand at extra corny corn dogs—corn on the cob battered and fried.

A note of caution: whatever you opt to batter and fry in this batter should already be safe to eat…Use ready to eat sausages, par cooked shrimp or lobster, fully cooked chicken…The corn dogs do not fry long enough to fully cook raw meats. 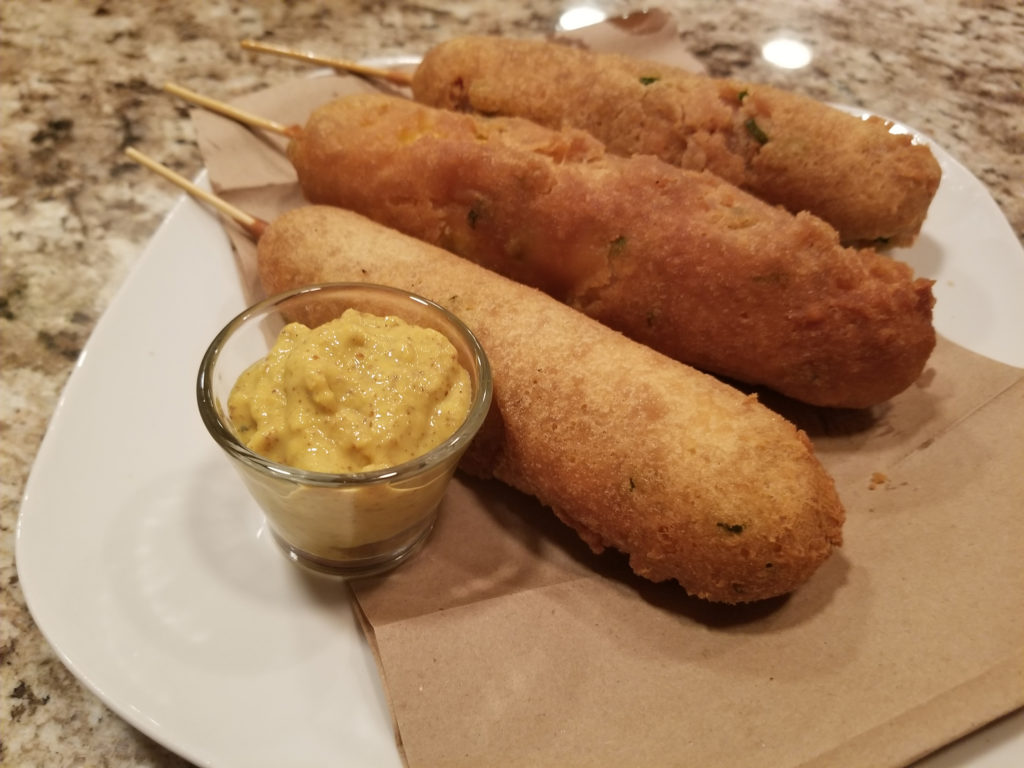 Package of frankfurters, a.k.a. weenies**

Mix all dry ingredients together. Stir in egg and milk. Stir in any add-ins. Pour batter into a tall, narrow glass. Place a skewer into each weenie. Dip into batter. Pull out and twist a little over the glass to allow any big excess to fall back into the batter. Deep fry at 350* for 3 to 4 minutes until golden.

You can fry in a large skillet full of oil, but do know that they will definitely be inconsistently shaped.

Weenies, but not the kind that plump when you cook ‘em

6 shrimp per skewer, broiled until nearly done and cooled

Whole carrots, roasted in olive oil and salt until tender, then cooled

Corn on the cob, boiled for 3 minutes then cooled