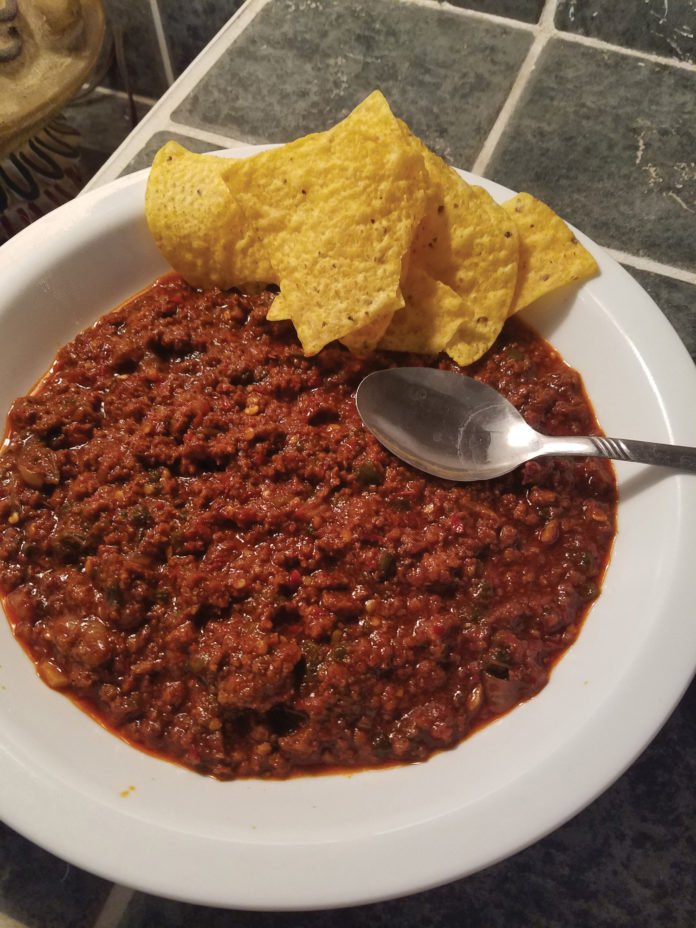 TThe weather has turned chilly. In central Texas, we get all excited when the temperature drops below 70 degrees, and we start acting crazy. Like white-tailed bucks during the rut. For the uninitiated, the rut is that one time of year when white tail deer mate. During this period the bucks seem to lose any sense of fear, whipped into a froth by the scent of does in heat. Where they were careful and cautious before the rut, they will walk out in front of you, almost stupidly, in pursuit of their females during the rut. We get a little like that also.

That first blast of cool air sends our men scurrying about willy-nilly to ready their hunting equipment, make sure their feeders are working, their blinds are ready for use, and their four wheelers are ready for action. Lord forbid one of them not be ready for opening weekend of hunting season. I swear, and this is an absolutely true statement, that my sister got married on the one open weekend in October that was not either the close of dove season, or the opening of deer season. One week earlier or later, and the groom would have been at the ranch, unavailable for nuptials.

The women of Texas typically enjoy this time of year also. Sure, some of us will hunt periodically. But many of us love the “me time” that comes with our men out of the house for days on end, in search of The Big One. The Muy Grande. A minimum 198 Boon and Crockett, with double drop tines and a 26” spread, that field dresses at 175 pounds. We are free to shop, to decorate, to bake. Free to get spa pedicures with reckless abandon. Our homes stay clean, because the men and boys are not there to mess them up. 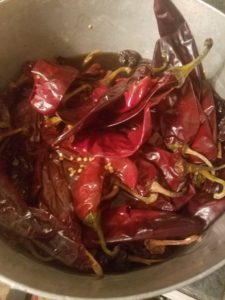 We do go through a bit of a frenzy ourselves. Chilly weather turns our minds towards Holiday decorating, shopping, baking, and what we will make with the 400 pounds of fresh venison, hog, or turkey that our hunter-gatherers bring when they return. We turn to heartier fare during the cooler months, and things like soup, stew and chili are frequent guests of honor at the dinner table.

Chili is not the semi-gelatinous muck that comes out of a can from the supermarket. Oh, maybe in college, after an all-nighter spent bar hopping, that sort of thing may have seemed appealing. But really it’s pretty gross. And since chili is so simple to make, why even go there?

In the most simple definition, chili is a stew of meat simmered in chile.

Huh? Okay, the chile is the fruit of a pepper plant, and member of the nightshade family. It is pronounced chee-lay, and is spelled most accurately, with an “e” at the end. Varieties common in most supermarkets include Poblano, Annaheim/Pasilla, Jalapeno, Serrano, and Habanero. Dried Poblanos are called Ancho. Dried Annaheims are called chile Colorado, and Dried Jalapenos are called chipotle….In the recipe that follows, I used Ancho and Colorado chile.

Chile is also a country in South America, and has literally NOTHING to do with this article.

Chili is a shortened form of the original “Chili con Carne”, which means chile with meat. There is great debate about the origins of chili.

Theory A has it that chili was born on the old cowboy and cattle drive trails. Dried meet (jerky), fresh venison, or whatever meat was available, was boiled to within an inch of its own existence with dried spices. Dried peppers, or chile, would have been widely available.

Theory B has it that chile con carne was created by street side food vendors during the 1920-1930 era in San Antonio, Texas. These vendors absolutely did sell chili, but the question is if chili came before them (see Theory A, above), or because of them..These vendors, who became known as Chili Queens, boiled the bejeezus out of cheap cuts of meat, stewing them for hours with chile and other spices . They sold their wares out of rows and rows of outdoor cooking stalls, with no refrigeration, and poor sanitation. YUM! With the emergence of public health laws, these ladies were retired from public life. 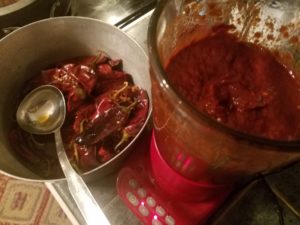 There are more theories, but we’ll stick to these for now. There is also raging debate about whether beans belong in chili. This topic is as divisive as the one about whether or not Kansas City BBQ or Texas BBQ is King. For the sake of ease, let me just put all of these topics to rest.

I believe that of the above chili origin theories, both are plausible. Theory A, with its cowboys on the trail, is much more romantic, so we’ll go with that one. Since we are assuming that chili originated with cowboys on the trail, and since we can assume that cowboys probably traveled as lightly as possible, we can surmise that beans were probably not included in the original “pot of red”, as we call it here. It is even far less likely that chili originally included any tomato products. However, chili being a stew, you are free to prepare it adulterated in whatever manner you wish. In New Mexico, they frequently include diced potato. In Cinncinnati, chili has cinnamon in it, and is served over spaghetti. I know. Gross.

Oh, and owing to the fact that there is nothing better on the planet than a properly prepared, wood smoked brisket, Texas BBQ is King. Period.

Chili recipes abound. You can find, literally, millions of recipes with a quick Google search. Since so many of them contain beans, tomatoes, and a myriad of other unlikely characters, I am including a recipe that is far more likely to represent what was originally eaten back in the day it was first made. Whichever day that was. 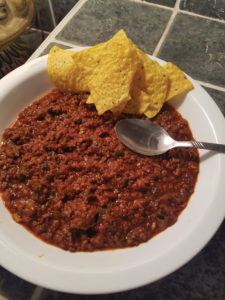 Using kitchen shears, cut the stem ends from the chile pods, and cut the pods in half lengthwise. Shake most of the seeds out and discard. If you leave them in, the end color will be far less robust. Place in a large bowl, and cover with boiling water. Place a smaller bowl over the top, and press down to keep the chile pods submerged. Weigh this down with a can or some other weight if necessary. Let the pods steep for 30 minutes. Place water and pods, along with garlic into a blender. Blend for a minute, or until pureed finely. This will be a deep, beautiful red.

Remove lid, and simmer for another hour, stirring frequently, or until the sauce is reduced, and the stew has a nice thick consistency. Stir in the cocoa. This will not make your chili taste like chocolate. It will give it a nice deep flavor. Chile and chocolate have been doing great things together since the Aztec culture….You’ll have to trust me here.

Now, salt to taste. If you’d like a bit of acidity, add the vinegar.

Except for salting the meat before browning, do not attempt to adjust the seasoning until the very end. Since the success of the dish relies on the reduction of the chile puree and the beer, the flavors will become much more potent when the chili has fully cooked.

If you must add beans, potato, or other such frivolity (although I strongly advise against it) add them (already cooked) at this point