Home Food How To Texan 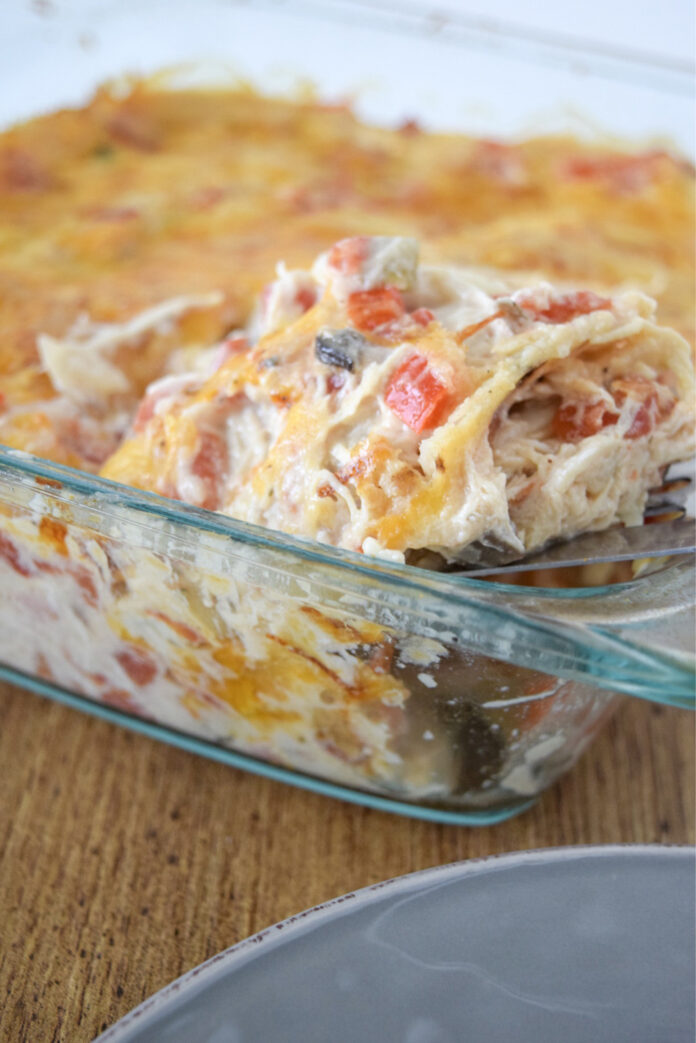 IIf you are planning on travelling or moving to Texas, you will need to study up on the language and customs. You know, just like you would if you were visiting any other country.

It isn’t that you will offend someone if you shake with the wrong hand, or slurp your soup at the dinner table. It’s that if you don’t understand a few things, you won’t be able to order food, understand directions, or blend in seamlessly to your new environment.

I will cover the 4 basic topics of Culture (Livin’), How we are
(Wearin’), Clothing
(Talkin’), Language
(Eatin’).Cuisine

LIVIN’:
This could take up volumes, so I’ll reduce it to its basest elements. The “Texas Code” has appeared in one form or another for many years.

My version, which hangs on the wall in my bedroom, pretty much sums up the ideals by which a Texan strives to live thusly:

I’ll be as hearty of mind as I am of body.
I’ll be a straight shooter and a square dealer.
I’ll honor my mama, my daddy,
and my God.
My family name will be sacred and
my word will be as good as any contract.
I’ll remember the Alamo,
Buy American,
stick by my friends and
eat more chicken fried steak.

Oh, and the only two sports you need to know about are Football (Friday Night Lights) and Rodeo.

And hunting isn’t a sport, it’s a way of life…

WEARIN’:
Men only really need jeans, several pairs of cowboy boots (only made in America), plain white t-shirts, and button down shirts. You can change your look from casual to business attire simply by switching from a baseball cap to a cowboy hat.

For formal events, a Texas Tux will usually suffice. This involves the wearing of a tuxedo shirt and black tails on top, over jeans and boots on bottom. A black felt or silver belly cowboy hat should finish it off. You may or may not choose to have your bow tie and cummerbund match your sweetheart’s dress.

Swimming attire would include trunks—never speedo type apparel. Boots may still be worn, or flip-flops.

For women, the same wardrobe would apply here as anywhere, except that American made boots are always an acceptable choice of footwear. Even for brides, at proms, and in a bikini on the beach.
Any outfit that cannot be worn with boots just ought not be worn at all. After all, we must protect our legs from mosquitos, cacti, and rattlesnakes.

Sandals are acceptable when you wish to show off a new pedicure.
King Ranch handbags make acceptable accessories.

TALKIN’:
First of all, we drop the “g” off of most words that end in “ing”. Not when we write ‘em, but when we say ‘em.  And like I just illustrated, we drop some baggage off the front end of words like “them”.  We don’t do this because we are stupid. We do it to save time.

Because we tend to be chatty. The more letters and syllables we can drop, the more words we can get into a conversation in the time we have.

For example, if a visitor in New York asks a local how to get to Main Street, they might hear “What do I look like? A goddamn road map?”

I’m not trying to slight the many lovely New Yorkers I know, it’s just that this is a true story..that actually happened…in real life.

I am also not saying that it couldn’t happen in Texas. It’s just not likely that it would.
When asking the same question in Texas, what is likely to happen is that you might hear:

“well, just go yonder about 2 miles, and then turn right at the Wilson place..you know Billy Ray never did get that little gal from Sweet Water to marry him…Then go about ½ mile fuh-ther to that big oak tree, you know the one that Old Man Johnson parked his tractor in a few years back, you can still see the green paint…take a slight left there, and about 3 miles more will take you right to it, quick as that….”

Also for the sake of economy, we may run words together, making one word where 5 used to be:

“checkthawlferya”—Often spoken by the lanky feller at the full service gas station, he is asking if he can check the oil for you.

“fixintuh”–preparing to, getting ready to…..as in
“I’m fixin’ to go to the store”
As a noun, a fixin’ is a side dish to your supper.

Some years back, I was the newly hired HR Manager at a Home Depot. I was being trained by a peer that wasn’t from here. One of the department heads, Robert, popped in to say he was going for lunch, as he was starved and hadn’t eaten all day. What seemed a very short time later, he popped back by my door, and the following exchange took place:

I looked up and said “Djeetyet?”

To which he replied ”yeah, I just grabbed a subway and came back”
“cool….see ya later”

My HR peer looked at me and asked what I had said to Robert. I didn’t get what she didn’t get, so I said

“Huh? You mean ‘see you later’?…”
“no, not that….he came in and you said something to him and he said he had just grabbed a subway….what did you say to him?”

I really had to think hard, as I could not imagine what was so perplexing…

I looked at her and said “Djeetyet?”

So I looked at her, and spoke very, very slowly, enunciating my words very clearly, so that she might understand.

Texan is a hard language to learn, apparently……

Also, we LOVE the imagery of a good analogy or other comparative statement:

“Been all over Hell and half of Texas”….This means that you have covered a huge area—done a lot of traveling. Obviously….Since Hell is infinity huge, and Texas is even bigger.

EATIN’:
You’ll need to understand a few basic terms to get by in Texas.

To cook large pieces of meat “low and slow” over indirect heat or hot smoke. Brisket, ribs, half chickens, pork roasts and whole hogs are examples of BBQ. Hamburgers and hot dogs are NOT barbecue. In Texas, the Holy Grail of BBQ is the brisket. Expect great debate over which type of wood makes the best BBQ. I like mesquite.

The only kind of beans are pinto beans. Cooked with bacon or salt pork, and beer. They may also have onion, jalapeno, Rotel and cilantro. Beans are never sweet and sticky.

This NEVER comes out of a can, and does NOT have beans in it. (please note however, that wars have been fought over the beans versus no beans opinion)   If it is made correctly, it will clear your sinuses for days.

This is a carbonated beverage of any variety. For example:
“While yer in there, can you get me a coke?”
“Sure, what kind?”
“A Grape Crush”.

If you actually want a Coke, you order a Coca-cola.

It is white, it is thick, and it is flecked with pepper. It may be tan if made with pan drippings, but otherwise is never brown and smooth. If you get smooth, brown, shiny gravy in a Texas establishment, the proprietor is a Yankee.  Not that there’s anything wrong with that–but it’s a geographical fact.

To cook over direct heat at higher temperatures. Much faster than BBQ. Hamburgers and hot dogs are grilled, as are steaks, vegetables, chicken breasts and seafood.

To cook or dry meat using warm or cold smoke. The process can take hours or days, drying the meat to preserve it. Jerkey, bacon, ham and dried sausage are examples.

Calling it sweet tea or iced tea is redundant. Tea is always iced and always sweet. If you want it otherwise, you have to ask for it special.

Few foods are as quintessentially Texan as brisket, chili, or chicken fried steak, but there are a few.

King Ranch Chicken is a popular casserole said to have originated on the famously ginormous King Ranch. It is best described as being like a chicken enchilada casserole, made with chopped cooked chicken, corn tortillas, cheese, and a cream of mushroom soup base. But like any other dish, every family makes theirs a little bit differently.
Not knowing for sure what I am putting in my mouth with canned soup, I make mine using a homemade base instead.

I hope you enjoy…. 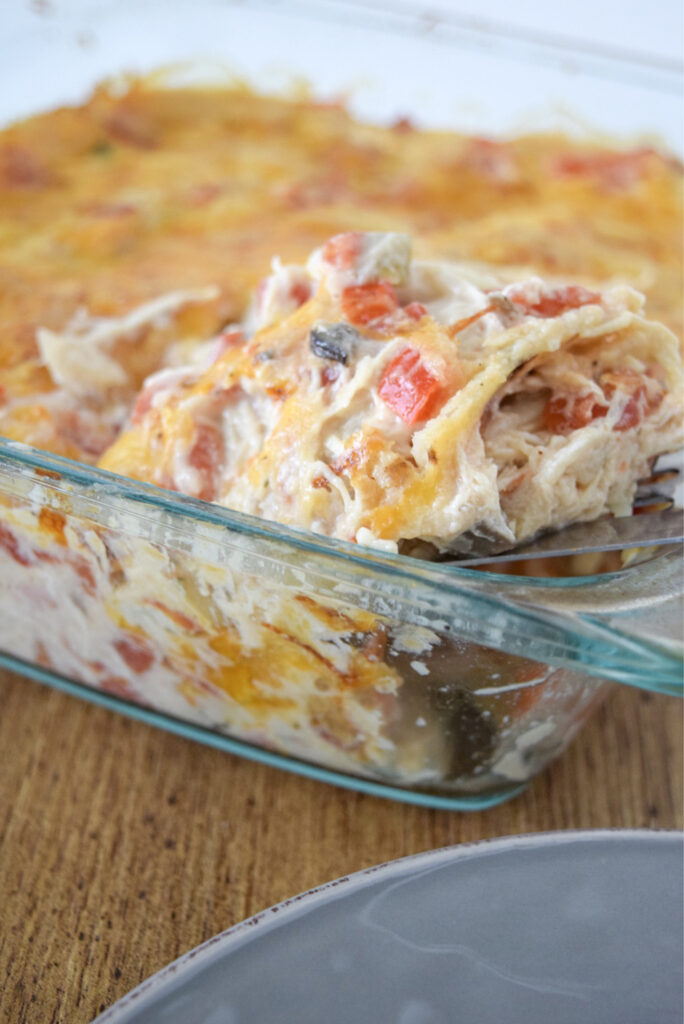 Cook the chicken breasts by simmering in water or stock until done. (Alternately, you may use a rotisserie chicken from the grocery deli). Shred the meat and set aside.

Heat butter in a Dutch oven or stock pot over medium-high heat. Add peppers and sauté until softened, about 4 minutes. Whisk in the flour…It will be very stiff. Add evaporated milk, a little at a time, whisking to keep it smooth. Repeat with whole milk.

Add ro-tel, corn, salt and pepper. Mixture should be the consistency of a thick cream soup. Add additional milk or flour if needed to attain that. Adjust salt and pepper to your preference.

Place one cup of sauce in bottom of a lasagna pan or 5 quart casserole.

Place one layer of torn tortillas, sprinkle 1/4th of the chicken, 1/4th of the onion, and 1 cup of the cheese. Repeat with remaining ingredients.

Pour remaining sauce over the top, and then top with remaining cheese.
Bake at 350* until cheese is golden and bubbling. Serve with Borracho (drunk) Beans and a green salad