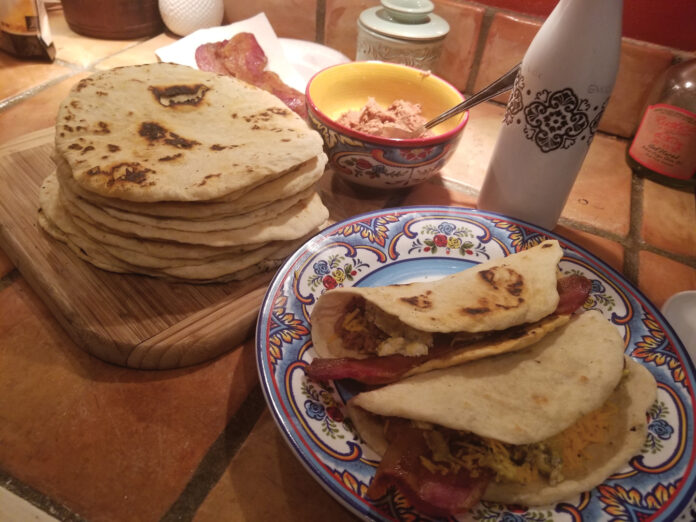 IIn Texas, like everywhere else, there are four main food groups. Ours are Mexican Food, Barbecued Brisket, Chicken Fried Steak, and Chili. Some would argue that Margaritas and Beer are their own distinct food groups, but they should be considered as seasonings. You may add more or less of each, to any of the others, to suit your taste. 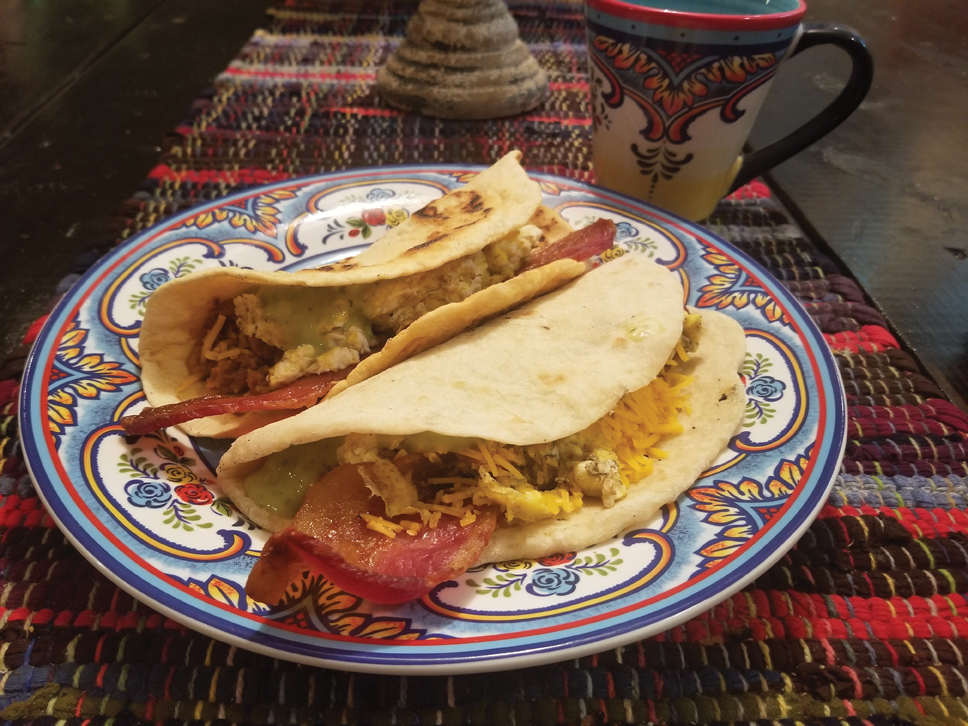 Place “A” has the best flour tortillas, but their enchiladas are weak. Place “B” has amazing refried beans, but their rice tastes like dirty socks. Place “C” has salsa I would drink out of a mug, but their tacos appear to be made of canned dog food. I’m not making that up.

I find myself dreaming up the end-all be-all Mexican Combination Plate. The corn tortillas will be homemade, a little bit thick, and will have good corn flavor. The picadillo will be made of actual beef, not canned processed corned beef, and it isn’t really necessary to provide an extra ladle-full of grease.  The taco shells will be fried on site, just before being filled and sent to the table. The salsa will be fresh and flavorful, with some heat to it, but it won’t melt my lips off of my face. The rice will be fragrant, devoid of peas and carrots, and not a sticky glob. The flour tortillas will not be thin, flavorless discs from a plastic bag, but will be thick, soft, and chewy, and a little bit salty. They will be made with lard. So will the nicely browned refried beans, which should have a little bit of a crust on them. From the lard.

I am not advocating eating lard on a regular basis. In fact, due to the fact that it is a saturated animal fat, I advise against it.  There are some dishes though, that just aren’t as good made with anything else.  Pie crust and fried chicken.  And authentic Mexican food.

If you are going to eat Mexican food out on a regular basis, stick with healthier choices such as grilled meats and seafood, fresh corn tortillas, borracho beans and grilled vegetables. Caldo and tortilla soups are good choices, as are grilled fish or shrimp tacos. 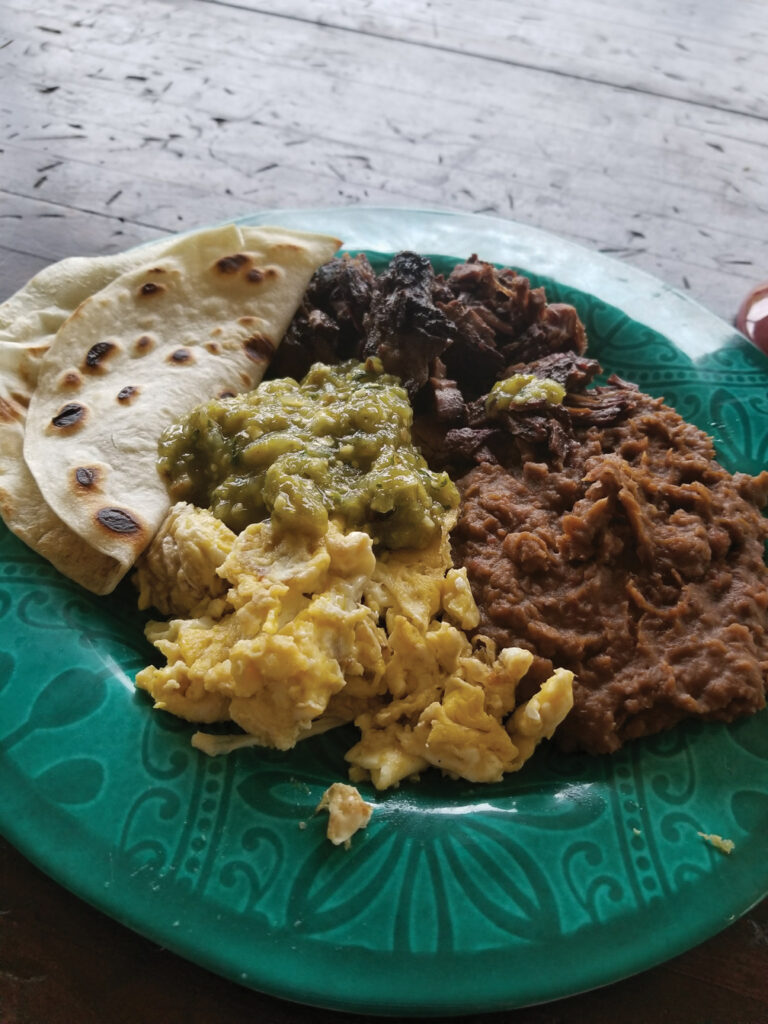 But every once in a while, such as the morning after a really good time that you can’t seem to remember, or on Sunday, nothing satisfies like a plate of bona fide, cheese-covered, made-with-lard Mexican food.

Another thing you will notice about many Mexican recipes, is that they call for cooking in a cast iron skillet. This is because traditionally, many of these foods are cooked in a large, cast iron vessel called a comal. It resembles a giant, cast iron wok. If you want the best approximation to that authentic flavor, then cast iron cookware is the only way to go.

Including a recipe for every Dream Mexican Plate favorite could easily fill a small book. Since we are giving praise to the lard this week, I am including three classic Mexican offerings that rely on it to be the best version of themselves—flour tortillas, refried beans, and pan de polvo…plus a recipe for picadillo to round out a meal.

In a large skillet over medium heat, heat the olive oil. Add the ground meat, cooking until no longer pink. Add the garlic, onion, peppers and jalapeno. Cook for a few minutes more. Stir in the salt, pepper, and cumin. Add the water and the beef base, and reduce heat to medium low. Simmer slowly until most of the liquid has cooked out and the remaining juices are thick. Serve in your choice of taco shells, nacho chips, chalupas, or whatever your favorite method of getting it into your mouth.

Combine flour, salt and baking powder in a large bowl. Add the lard, and using your fingers, cut in the lard until the mixture resembles coarse meal. Stir the water in with a fork until a sticky dough is formed. Using your hands, knead the dough inside the bowl 10 or 12 times, until it forms a well incorporated ball. Cover with a damp paper towel and let it rest for 15 minutes. Divide the dough into balls. Use walnut sized for snack-sized 4 inch tortillas, and use twice that to make 8” tortillas for tacos. Allow to sit another 15 minutes.

To roll out your tortillas: place a ball of dough on a heavily floured surface…Using a rolling-pin, roll the dough one time in one direction, then turn the dough a quarter turn and roll again. This will help ensure a uniform circle. Roll each ball a few times until the dough is thin–it should be a about 4 inches in diameter if you used a walnut sized ball, and 8” if you used a larger piece. The first time or two that you make these, you may want to roll all of the dough out before heating your skillet, and keep the rounds between wax paper while you wait to cook them.

Cook until large bubbles start appearing, about 30 seconds, and flip it over to cook the other side. Stack the tortillas on a plate while you finish the batch, but do not place them in an oven.

REFRIED BEANS
You may use your favorite borracho bean recipe for these, but canned pinto beans will work just fine if you don’t have the time or inclination to cook up a batch.
4 cups cooked pinto beans, including some juice
1 teaspoon salt (if using canned beans or unseasoned beans)
1/4 cup lard

Place beans, and salt if using, in a blender or food processor and process until smooth. Heat lard to medium high heat in a cast iron skillet. Gently spoon the beans into the skillet. Cook without disturbing for 5 minutes. Stir just to turn the bottom up a little, and cook for 5 more minutes. Continue turning and cooking in this manner, until the beans are bubbly and have a nice brownness to them. Often served with a sprinkling of shredded cheddar cheese, and popular as a breakfast taco on flour tortillas.

Pour water over cinnamon and anise, and allow to steep for 30 minutes.

Mix the flour and baking powder together in a bowl and set aside. In a large mixing bowl, cream together the sugar, lard, and shortening until smooth. Add the tea to the creamed mixture, and blend until smooth. Stir in the salt. Add the dry mixture, a little bit at a time, until a nice smooth, and not sticky dough is formed. Roll out on a piece of waxed paper, to a thickness of between 1/3 and 1/2 of an inch. Use any small, 1-2 inch cookie cutter that you’d like. Bake at 325 degrees for 8-10 minutes. Mix together cinnamon and sugar and set aside. When cookies are hot out of the oven, but cool enough to handle, gently toss them in the cinnamon sugar.