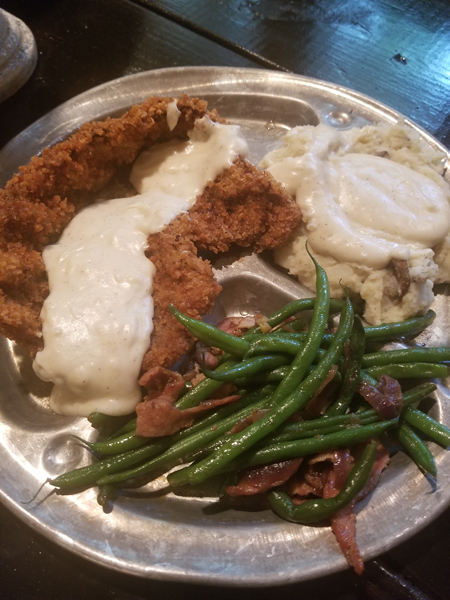 WWhen I was a kid, all I knew of Wiener Schnitzel was that it meant the saltiest, gooiest, cheesiest and somehow still delicious chili cheese dogs were about to go down. Down my throat. Get in mah belleh….

In fact, that was what my mom craved when she was pregnant with my baby sister. I was 14 at the time, and still couldn’t even get a learner’s permit to drive. But when your mom gets a chili dog craving at 11pm and she and your dad are already in their jam jams, you get to drive. Often. And with the full knowledge and support of your ‘rents, in case you get pulled over. It was mission critical. It didn’t suck to be me. But I digress.

Where was I going with this?

Ah yes….Schnitzel, as I would find out much later in life, had ZERO to do with wieners, and I have all kinds of questions about how the hot dog chain got its name.

What Schnitzel really is, is a traditional German and Austrian dish. A cutlet of meat (beef, veal, pork or chicken), pounded thin, breaded and fried, and served with gravy. If that sounds familiar, it’s because you just figured out which Texas hill country settlers brought us what we know now as chicken fried steak. There are differences, of course. German Schnitzel ( Schweineschnitzel) is most often made of pork and is alternately called Jaegerschnitzel. True Viennese (Wiene) veal schnitzel is Wiener Schnitzel, and is protected by law as such in the same way that only sparking wines from the Champagne region of France can legally be called Champagne.

The word Schnitzel refers to the cooking method used, which basically involves pounding your meat into submission (don’t feel bad…your meat enjoys such treatment), breading it in crumbs, frying it, and serving a gravy over it. Traditional gravies included red wine gravy, mushroom gravy, brown gravy, and even a sauerbraten style gravy that gets a sweetness from crushed ginger cookies. Das weird.

In Texas, settlers found beef to be more abundant, and local tastes to be less adventurous. Hence was born the Chicken Fried Steak with Cream Gravy. And there is no substitute.

You’ll find CFS both breaded in crumbs, or dredged in seasoned flour, although the crumbed version is more authentic to the origins of Schnitzel.

You’re a daisy if you don’t.

For breading options, you may use bread crumbs, panko (my choice), crushed saltines or crushed pork rinds for a KETO friendly breading, or the flour/egg/flour method for the fried chicken type of breading. **

(double this if you are doing the flour/egg/flour method)

GRAVY:
1/3 cup flour (use almond or coconut flour for keto)
2 cups milk or half and half
2 t salt
2 t pepper

Dip your cutlets in the seasoned flour, covering completely. Shake off excess.

Dip in beaten egg, allowing excess to drip off briefly.

Then dip into your second coating.

( If you’re using the seasoned flour as both your 1st and 2nd coating, pack as much flour onto the cutlet as possible in this step, to create a nice crust.)

If skillet frying, fry until golden on the bottom, about 5 minutes, then flip and cook the other side until golden.

If deep frying, fry for about 10 minutes, until golden.

Place on a wire rack to drain and cool while you make the gravy. Do NOT drain on paper towels. This causes the breading to soften.

MAKE YOUR GRAVY:
After removing meat from skillet, whisk the flour into the hot oil until smooth. Add milk a 1/2 cup at a time, whisking until smooth each time. It will be very thick at first. This is normal. After adding all the milk, if it’s thicker than you like, add a little more until it’s how you prefer. Then season to taste with salt and pepper.

Serve your steak with a little gravy.

Your CFS should be served with mashed potatoes, and green beans cooked with bacon and onions. You could serve it with other options, but why would you? Ain’t nobody got time for that nonsense.