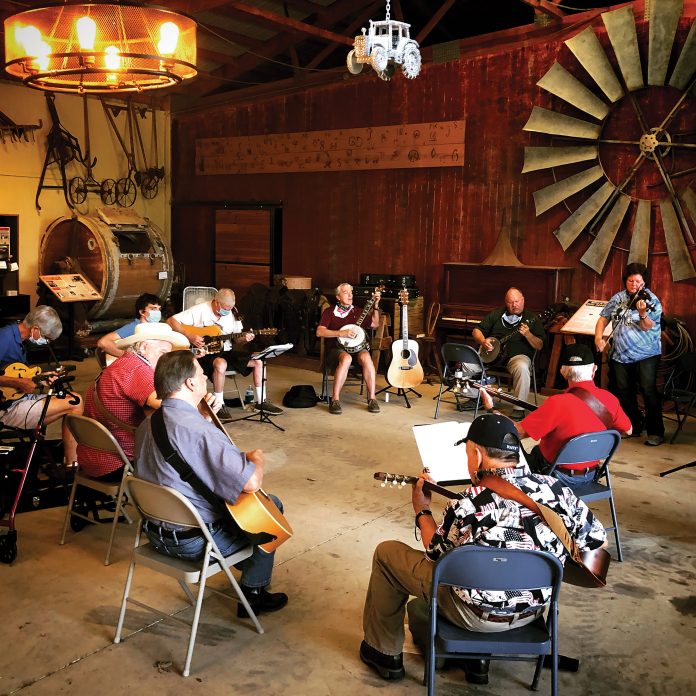 Bluegrass Jams
at the AgriCultural
Museum & Arts Center
Bluegrass music was born from the people who migrated to America in the 1600s from Ireland, Scotland, and England. They brought with them the basic styles of music that are generally considered to be the sounds of bluegrass music as it is known today. Songs were written about day-to-day life in the new land. 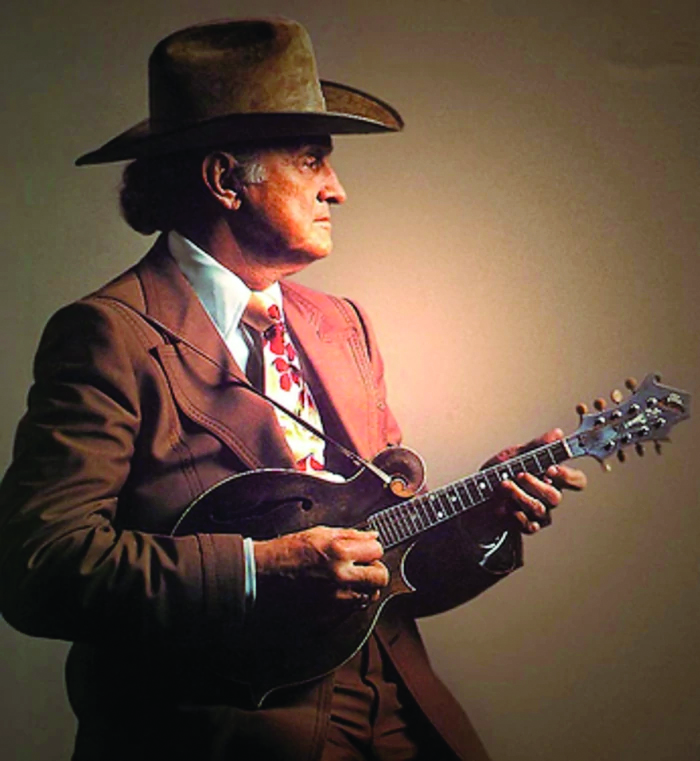 The name “Bluegrass” comes from Bill Monroe and his “Blue Grass Boys” who first appeared on the Grand Ole Opry stage in 1939 and soon became one of the most popular touring bands to emerge from Nashville’s WSM studios. Bill’s band was different from other traditional country bands because of its hard-driving and powerful sound that used traditional acoustic instruments and featured distinctive vocal harmonies. 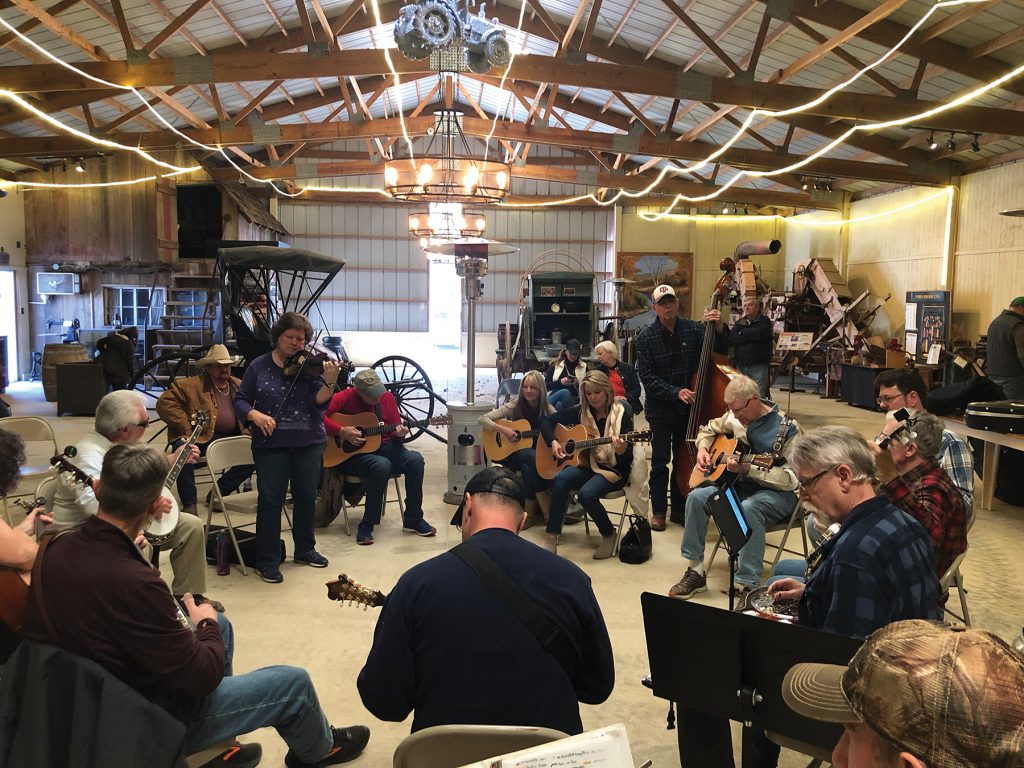 When Earl Scruggs and Lester Flatt formed their own group, The Foggy Mountain Boys, they decided to include the resophonic guitar, or “Dobro,” into their band format. The Dobro is often included in bluegrass band formats today as a result.

Bluegrass music is now performed and enjoyed around the world. The International Bluegrass Music Association claims members in all 50 states and 30 countries. In addition to the classic style born in 1945 that is still performed widely, bluegrass bands today reflect influences from a variety of sources including traditional and fusion jazz, contemporary country music, Celtic music, rock & roll (“newgrass” or progressive bluegrass), old-time music, and Southern gospel music.

The Bluegrass Jams at the AgriCultural Museum and Arts Center in Boerne takes place every 2nd and 4th Saturdays of the month. Musicians come to play in a circle and take turns playing the tunes and singing lead on standard bluegrass songs. We asked some of the players a few questions about Bluegrass.

Name? Dave Moore
Instrument? Banjo and mandolin
How long have you played? Bluegrass 12+ years (guitar since high school)
Why you chose bluegrass? My dad got me to go with him to the state-wide jam in Pearl, TX, and saw some really good pickers. I was also was influenced by the movie Oh Brother, Where Art Thou? (Terrific music and musicians).
Your favorite songs to play? Fiddle tunes, Irish, old time tunes, mainly instrumentals. Red Haired Boy, Salt Spring, Bells of St. Mary’s, Flowers of Edinburgh, Angeline the Baker, Georgia Boys, dozens more….

Anything else to add? The Boerne Pickers jam began 4 or 5 years ago at the Electric Coffee shop across from HEB in a strip mall. It was started as a spin off of a weekly jam in San Antonio for those of is who lived west of town and wanted something closer to home. Some nights there were only 2 or 3 of us. But other times, we had 8 or 10 with at least one of every bluegrass instrument there and it was awesome.

The coffee shop later closed and we moved to the upstairs party room at Long Horn Cafe. Somehow Kristy Watson found us there. At her insistence, we tried the Agricultural Museum and had to admit that bluegrass perfectly compliments the agrarian theme there. Since then, it’s been a joy to see all the new folks that have come and played music with us over the past few years, sometimes more than 20 pickers in one place. We have regulars now coming from 20-30 miles away to play there as well as quite a few fans and onlookers.
We are not a band, as the composition of the circle is different from week to week. That’s the definition of a jam. We welcome musicians of any experience level and try to provide a place where newbies can grow their abilities, and where seasoned pickers can also cut loose. And most of the time it sounds pretty good, I think.

Name? Gary Pennington
Instrument? Mandolin
How long have you played? 47 years
Why you chose bluegrass? My Dad loved bluegrass and he took me to a Seldom Scene concert when I was 10. That’s all it took. I love the “lonesome sound”.
Your favorite songs to play? Anything by Hotrize, David Grisman, and Chris Thile.
Anything else to add? Bluegrass is the best music because it incorporates old time, Irish, blues and Jazz into the music. It also works for beginners and pros.

Name? Buster Green
Instrument? Guitar and banjo
How long have you played? Guitar (50+ years), banjo (3 yrs)
Why you chose bluegrass? I am a clog dancer, which goes hand-in-hand with bluegrass.
Your favorite songs to play? Too many to single one out!
Anything else to add? I also love 60s folk music & R&R (especially Beatles!)

Name? Sheryl Sultenfuss
Instrument? Fiddle, beginner mandolin
How long have you played? Started taking fiddle lessons in fall of 2003. How long I’ve been “playing” is a matter of opinion. 15 years?
Why you chose bluegrass? I lived in Lubbock in the early 80s where there was a bluegrass jam and show in the areas every Saturday night. I loved it! Then in San Antonio I joined a clogging group that uses bluegrass. It’s fun danceable music. I also enjoy playing Irish and country.
Your favorite songs to play? Red Wing is my go to song. Also I’ll Fly Away and Where the Soul of Man Never Dies. I tend to like the gospel songs, and many fiddle tunes.
Anything else to add? Playing music is great therapy and a wonderful way to make friends as well as keep your brain active. There’s also a pretty good chance I’ll end up clogging a little at any jam.

Name? Doug Sultenfuss
Instrument? Upright bass
How long have you played? About 15 years
Why you chose bluegrass? I started playing bass when I was going to jams regularly. It’s more fun to participate than to just listen.
Your favorite songs to play? Georgia Boys. (Aka Seneca Square Dance, Federals are Coming. About 5 different names.)
Anything else to add? I’m also a retired clogger and I learned about bluegrass through dancing.