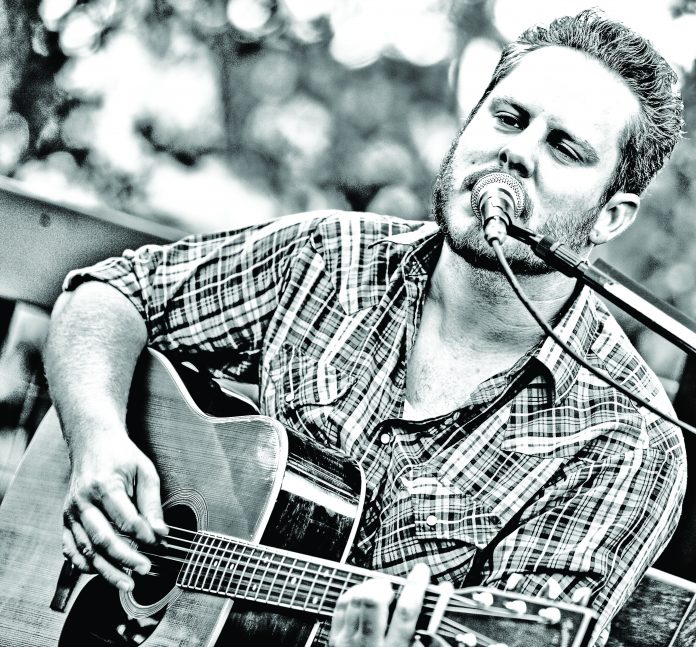 It has become an unfortunate rarity within music to find, what I like to refer to as, an “old school cool” artist/sound. By that, I mean, the kind of music that is true to the roots of a given genre, unpretentious both in terms of instrumentation and production, and lyrically authentic. I feel that this month’s feature artist embodies that spirit in his songs.

Having grown up in a good ol’ classic church background, Jordan Minor was introduced to traditional gospel tunes and hymns of a quintessential nature. “Music has been a part of my life for as long as I can remember. I was first exposed to gospel music at church and took to it, but I also got a good dose of oldies while riding around in my dad’s car.”

Beyond simply enjoying being a well-rounded listener, Jordan felt that magnetic draw to participate in it himself from an early age. “My dad had a guitar in the closet, but I don’t ever remember him playing it. I remember being young when I started asking to get it out so I could ‘look’ at it. At some point, before kids came along, I know he spent time playing some. He wanted to eventually get a Martin D-28. That was out of his price range, so he settled for the Takamine version in 1977. That was the guitar in the closet under the stairs that I first picked up; I got to use it when I took some lessons around 5th grade.”

There’s something magical about when someone who will gradually morph into actually being a musician first picks up their instrument. All the time, people tell me, “I so badly want to play the guitar, but it’s just so hard. What do I do to get better?” I’ve gotten to the point where my response is something along the lines of, “Yeah, it takes work, but the only thing that will make you better is discipline and desire.” Basically, you just don’t want it bad enough.

Minor goes on to share more about his process of developing his capacity to play, “I mowed enough lawns to save up for an electric guitar a couple years later and I tried to be Jimi Hendrix for a couple years. I played some in the youth band at church, but most of my playing early on was done in my bedroom.”

There’s a big difference between someone that just wants to learn an instrument because they think “it would be cool” and someone that becomes a musician. Sure, there’s some natural ability that’s a huge help to have, but it will always come back to the combination of discipline and desire. Someone that possesses those qualities in relation to their musical growth WILL become a MUSICIAN. Not just a person that messes around with an instrument. The same principle absolutely applies to songwriting. All that time spent in his room alone is what the growth into an artist requires, and Jordan innately “got it,” whether he realized it or not. You see, like literally anything that is meaningful and productive in life, proficiency is earned.

“I started trying my hand at songwriting in high school and continued that as I moved into my college years. In 2002, I moved to San Marcos. That’s where I really caught the music bug. I spent most of my time playing for friends or myself until I took a course called The History of Country Music. That course was taught by Kent Finlay, who spent the rest of his time running a music venue called Cheatham Street Warehouse.”

I never had the privilege of knowing Finlay myself, though there are literally dozens of musicians whom I know well and respect greatly that were shaped to a significant degree. He possessed an understanding of crafting a song that sets out to actually communicate something meaningful to a listener, whether that be a feeling, a story, or even a larger idea (or ideal), and he worked to pass that on to the younger generation of songwriters.
“While taking that course charting the development of country music, Kent mentioned his weekly Songwriter’s Night during class and I let it slip that I had a few songs of my own. He pestered me into checking it out one Wednesday night, and I spent the next several years basically living at Cheatham Street.”

In terms of songwriters that impacted Minor, it’s apparent that Finlay was more than just an influence. “Kent was both a mentor and friend, and beyond that, he really helped push me as a writer. He and I wrote some songs together, and he was kind enough to give me so many opportunities on his stage at Cheatham Street.

“Billy Joe Shaver is another Texas songwriting legend that was a huge influence on me. Billy was the real deal and his songwriting was so honest. He made it sound so easy but he was miles above most of his peers when it came to songwriting.

“The stuff I write and play tends to lean toward the Country/Folk Rock genre, but I grew up listening to everything; my musical tastes are still pretty broad. Tupac Shakur is right there at the top when it comes to musical influences. Most folks don’t tend to think of rappers when they think about songwriters, but Tupac had meaningful lyrics and was an excellent storyteller.”

In listening to Jordan play music, whether original songs, or his own spin on someone else’s tune, the emphasis on being true to the songs is clear. He brings a grit and authenticity to his delivery on stage, and that unfiltered sincerity gives the listener the sense that the music has meaning. And the music does.

As life would have it for so many greatly talented artists, juggling family life and financial responsibility has to be balanced with time on stage. “Nowadays, I don’t play as often as I used to. The biggest challenge is juggling family life and work around music. I slowed down a lot when my first daughter was born, and I made it a point to try and only play shows that meant something to me.

“I worked hard to get to a point where I could play venues like Gruene Hall and Cheatham Street regularly, and I realized that I wasn’t helping myself by playing some background music at some sports bar for $50. Having a day job allows me to be pickier about the shows I play. I don’t have to take gigs to make rent money and I try to stick to shows where the audience is there to listen. That means playing a lot less, but I actually enjoy it much more now.”

Jordan stays busy with his home life as a husband and father of two lovely little girls. “Between my family and owning my own window cleaning business, I keep a full schedule. I know a lot of folks that hate their jobs, but I’m really blessed to do something that I love. Cleaning glass all day is pretty zen and I usually have an audiobook or podcast going while I work. It’s oddly relaxing. Other than that, I enjoy taking the kids swimming, reading books, and collecting pocket knives.”

Beyond being a gifted, authentic singer-songwriter, there’s a good man with a kind heart. Loves his family. Works hard. Holds a grounded and grateful perspective on life. Hard not to like the guy. I’m sure you would agree. Check out a performance if you ever find yourself with an opportunity to do so; you’ll be glad you did.