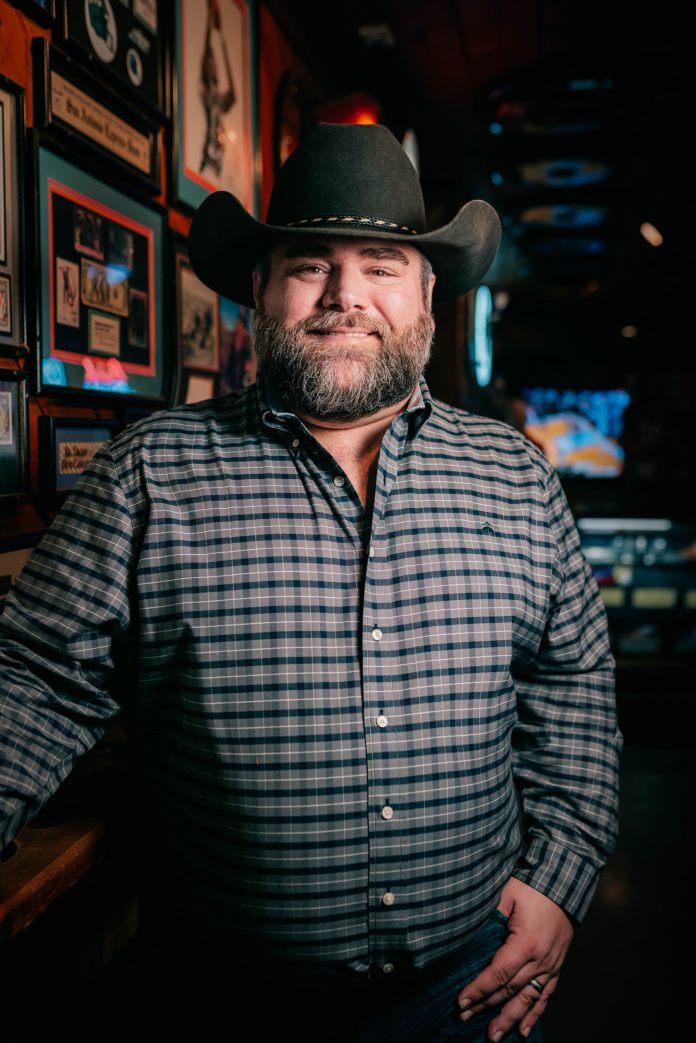 If you’ve read my column many times over the last few years, you’ll have heard me talk about how quality musicians are drawn like a magnet to the town of New Braunfels. Our subject for the month is yet another artist that I met at a show one night in that “little” town nestled between two rivers and highway 46 and interstate 35.

I believe it was actually a Tuesday night at Tavern in the Gruene; one of the truly special music venues in Gruene, that was stolen from us by the ravages of COVID. A couple of my buddies were playing, one of which was Tony Taylor who was featured a few months back. There was a fella on one of the stools playing who immediately struck me with his authentic, classic country sound. That musician’s name was Keith Hickle.

As someone who grew up loving country music, I’ve become completely disenchanted by what the genre has become. Almost the exact same meaningless, predictable, BS on “country” radio honestly makes me sick. And I LOVE country music. Whatever that is on the radio nowadays purporting itself to be the great, rootsy style of music many of us have come to love, absolutely is NOT country music. Wow, I sound old. I apologize for not apologizing if you happen to enjoy what is defined as country music today. I digress.
Let’s get on to my conversation with my friend, Keith Hickle, who IS a true country artist. I’m gonna let him tell a chunk of his story uninterrupted, because the way he puts it is a bona fide, organic depiction of what the journey of a musician can be.

“I don’t come from a musical background. My parents were educators and my dad was a coach for almost 30 years. As a child, we were always involved in sports or some sort of outdoor activity. I noticed early on (around 7 years old) that though I loved being a part of that world, every time I heard music on the radio, I would want to stop and really listen. My parents loved classic rock and seemed to always have it playing. My dad would make me stop and listen to guitar riffs he thought were cool. My mom would explain the lyrics to me when I couldn’t understand them. Both those things got me heavy into what music was all about. I was drawn to both the depth and the lighter side. Although my most vivid memory of when music really took hold was the first time I heard ‘A Boy Named Sue’ by Johnny Cash. The story that song tells, the way J.R. Cash sang, and the emotion made me love country music and how the songwriting was. 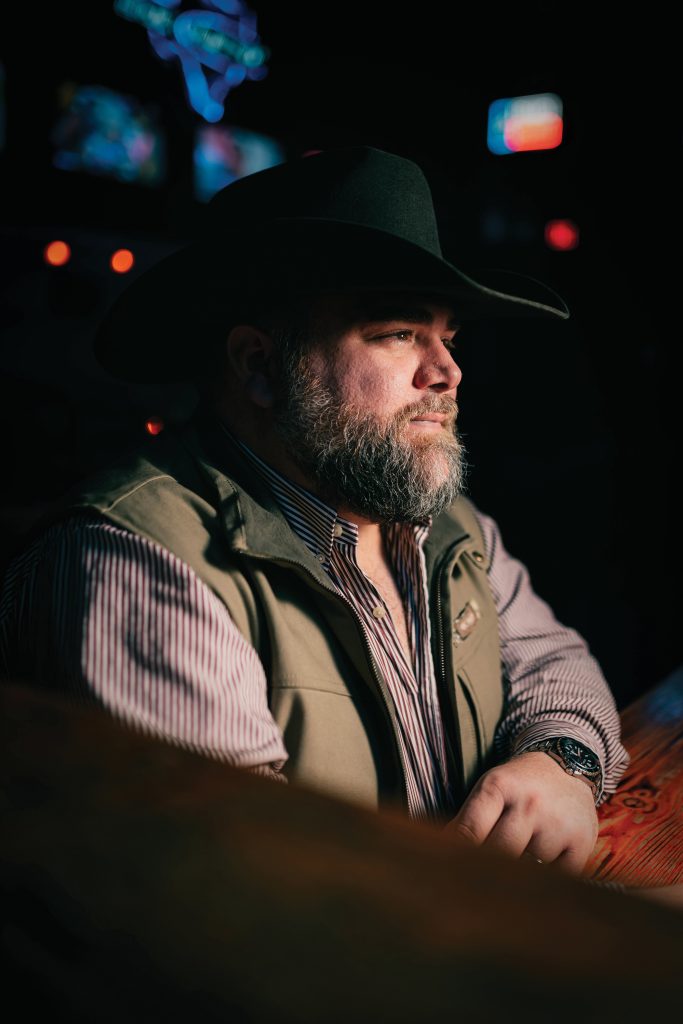 “I didn’t start playing any instrument until I was 22. I always wanted to play guitar, but it was so outside of my comfort zone and beyond a talent I thought I had. I would see friends play at church or at parties and would be drawn to them. To me It was the coolest thing ever to be able to just pick up a guitar and play a song. That’s simple now, but back then it was awe-inspiring.

“My brother came home from college during Thanksgiving break one year and brought a guitar. He was upstairs learning chords, and I couldn’t help but watch him. He thought I was being supportive, but the whole time I wanted to be better than him; that’s the competitive nature to our brotherly love. It had taken him a few weeks to learn a song, and seeing him accomplish that really gave me the push I needed to start learning. He left the guitar at home when he went back to school, and I had it in my hands from that moment on. I taught myself how to play, and within a few months, I had learned about 20 songs.
“I almost immediately started ‘performing’ after that. I would show off my new talent to family and friends, and sort of sing along to my guitar pickin’ but it wasn’t until I was dared to sign up for our local talent show that my new ability ‘took the stage.’

“My best friends dared me to sign up for a talent show one Sunday at our county fair. I was cool, calm, and collected until I stepped foot on that stage. It was the first stage I was ever on, and it was obviously a lot for me to see a few hundred people out there looking back at me. I sang. I played my guitar. I was shaking like Elvis (not on purpose) the whole time, but I won first place. That feeling of hearing everyone in my hometown cheer me on is what led me to today.”

Now, I wasn’t there that night, but I think I know a little bit about that feeling Keith had. Not only when he looked out at the crowd, but also the experience of finishing a song to the unexpected cheers of a willingly-listening audience. Keith shared with me that his main influences have always been Merle Haggard, Daryle Singletary, and Don Williams. I’d imagine that anyone reading the column is familiar with at least one of those musical greats. I assure you, when you listen to Keith Hickle, all three of these men can be heard as artists who have helped shape the man we’re learning more about today.
“My Grandpa Cluiss, who was married to my grandma for over 60 years, worked at a refinery until he retired and personified the blue-collar country way of life. He had endless stories that always had a moral to each one. So, the artists I was drawn toward sang about pride, hard work, love, and had some humor mixed in.”

Keith has played music now for a number of years, and like any musician, the last 2+ years have been arguably the most challenging thing we’ve faced in our work. Completely losing momentum in the business in 2020 was painful. We all know that pain was felt all across our economy. Today, it seems we all seem to have a considerably greater level of gratitude both in our work, and just in all the aspects of our lives in a really refreshing way. As tragic and challenging as these last 2-3 years have been, I’m proud of the resilience I’ve seen in much of humanity.

We’re still human though, and factors beyond our control that have significant impact on both our health and finances inevitably take their toll. It’s imperative we find and cultivate things in our life that reinvigorate us. Keith shares some of those things, “My wife, Paula, and I are foodies of sorts. We love to try locally owned places and sample foods we don’t normally eat. I also like to drive. I recently took a solo trip west of Big Bend National Park and loved it. Seeing the big Texas sky and the stars at night is calming and peaceful. I enjoy podcasts, especially anything scary. I love finding the hidden gems of stories that are exceptionally good. Also, learning how to play the fiddle helps a lot. I love photography. I’m always trying to take quality photos and videos with my phone. I talk with my wife about the kind of pictures I’d love to take. I’ve never owned a professional camera but one day I will. Something about capturing a moment in time with beautiful quality resonates with me.”

Like for almost everyone in the world, when we got into the full-fledged pandemic, it was difficult to make ends meet. Bills didn’t go away, but the money sure seemed to do so. Hickle opened up about this challenge, “Even though music is full time. Since 2020 happened, I took a part time job at a local high school as a substitute teacher. I cover a lot of subjects, but I get to talk to a lot of teenagers throughout the day. Hearing their views on today’s music and their different ideas keeps me grounded and helps me stay in the veins of creativity more times than not.”

All the way back in 2010 was when Keith really started this journey after moving to New Braunfels. His first open mic there was at a spot spoken of earlier in the column, Tavern in the Gruene. “I was blown away at the talent I heard that night. Prior to that, I hadn’t heard or been involved in any kind of music scene before. I played my hour set and got to meet a lot of really amazing artists that night.” That night would prove to be significant in the beginnings of Hickle’s musical road. He began to really build inroads relationally.

He became the front man for a season for a band back out of his hometown of La Grange. Met Brandi Behlen in 2014 at a wedding which began a meaningful musical partnership that still is alive today. He also was hoofing it playing solo shows as well and got himself into the rotation for gigs around the Houston Livestock Show and Rodeo show. He has played upwards of 200 shows annually for a long time now. Keith Hickle has put in a boatload of hard work for over a decade now. He remains grounded and grateful. Oh, and one talented son of a gun. Not to mention, he’s one of the nicest guys you could ever hope to meet. Look him up and catch a show sometime. You won’t regret it.

Keith closes by sharing some much-needed perspective in a world full of folks that often lose sight of what’s important. “While writing today, I was looking at my wife playing with our dogs. And in that moment, I’ve realized that I’ve made it. Success is only gauged by the person who is trying to achieve it. I’m able to do what I love for a living and have a life with my person, all because I listened to my heart. And my heart will always be in music.” Well said, Brother. Well said.