When you walk into a bar and hear a great band playing, or one that you love to follow, it’s common to assume that the lead singer is the “best” musician on stage, simply because they’re in the “lead role” of the band. The fact of the matter is, that’s oversimplified in many cases, and in others, just wrong. The Eagles were full of talented musicians, but one could argue that perhaps the most gifted overall was the man behind the drums, Don Henley. Similarly, Nirvana featured Kurt Cobain as frontman, who sadly, and mysteriously died at 27 years old. Though Cobain was a unique and robust talent, the man that wasn’t in front, Dave Grohl, coincidentally who also played drums, is widely-recognized as a true musical genius with a capacity for song and stage that is second to none.

That leads me to the introduction of this month’s featured artist, Logun Timberlake. I’m not positive if it was the first night I met Logun, or very shortly thereafter, that I was at a show where he was on stage with a lively country/southern rock group. Timberlake was the bassist in this band; quite in the background throughout most of the show. Little did I know how much talent he actually possessed. More on this realization later.

During the formative years of life, both developmentally and musically, Logun’s mother regularly sang in dancehall and barroom country bands and as a solo act. While attending various shows, he became infatuated with the jukeboxes. “I would gather quarters from wherever I could find them and feed the ‘magic box’ while I scrolled through the cover art of the albums behind the glass. Memories of those nights stick out to me as some of my earliest involving music.”

Surprisingly, it would take some years before he took to playing music himself. “It actually wasn’t until I was 15 or 16 that I picked up a guitar, my mother’s old red Yamaha acoustic. I realized I could make noises like I had heard on the magic glass boxes. I played guitar for a singer-songwriter that was a few years older than me in highschool named Lindsey Rogers. The first time I got on stage, we were playing at our 4-H County Talent Show and came in second place behind a Rock N Roll group. We were thrilled. Lindsey was dating the lead singer.” 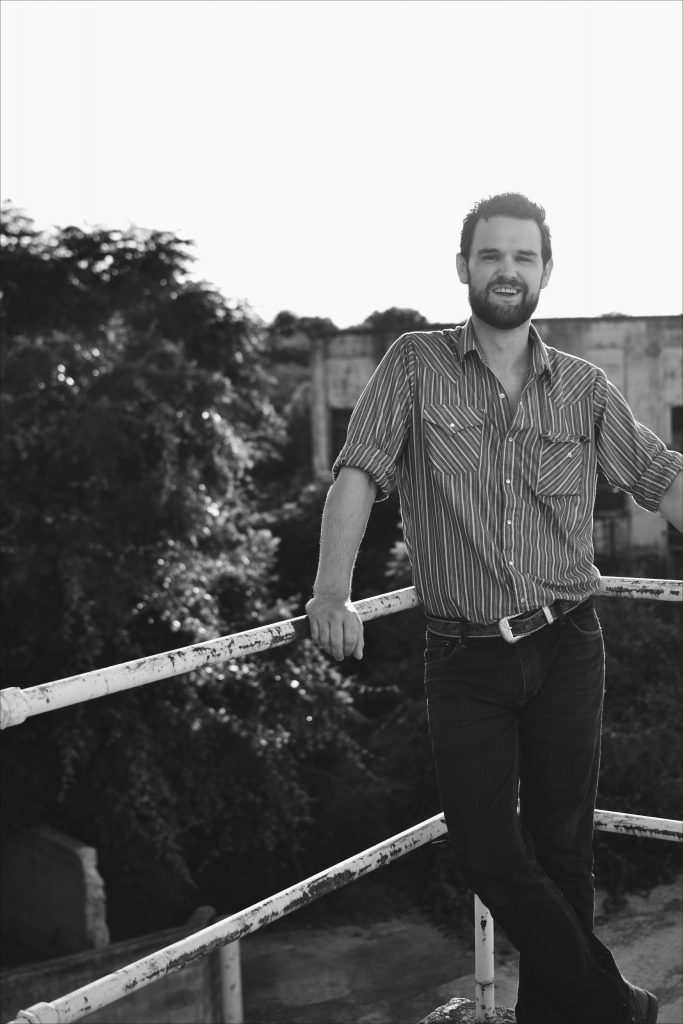 Thrilled. Thrilling. That first time really experiencing the rush of being on stage. There’s nothing quite like it. “After the obligatory garage punk rock and Texas country bands in high school, I enrolled at South Plains College in Levelland, Texas for Sound Engineering. In retrospect, I should have leaned into the live performance program they offered, but I felt that was too obvious. It wasn’t until I made the move to Central Texas that I found my voice.”

Speaking of finding one’s voice, back to when I first saw Logun on stage. He was in the background, quite casually holding down the low end of the band’s performance. He seemed reserved, almost even a little bored. I’m not saying he was, as I’ve come to learn that he loves and appreciates all aspects of what makes the music great. I really only say that to hammer the point home of how surprised I was when I got to see that Logun was really capable.

“I’ve played bass and lead guitar for a few different artists in the area, but I am always most comfortable on my own stage. Sometimes just me, a guitar, and my songs. And sometimes, singing rock n roll, blues, and loud country songs with a full band. I suppose it depends on what night it is! I’ve grown to appreciate it all.”

When I got hit with Logun’s talent, he was on his OWN stage. This time as the frontman performing at Billy’s Ice House in New Braunfels. This was back when I lived there as well, and I was coming home from an out of town gig of my own. I decided to stop by Billy’s, which is always a pretty happening joint, to see what might be going on around there.
Most bands in town were guys I was friends with, or at least knew pretty well. As I walked toward the venue, I heard a voice with which I wasn’t familiar. And it was good. And the music was really good, too. I was excited to get inside and see what was up. To my significant surprise, it was my buddy Logun Timberlake at the front of the stage. Singing his heart out with grit and tenacity. Killing lead guitar lines. And adeptly leading the band. Not to mention, the energy he was bringing to the performance was palpable.

Logun was immersed in the tunes of Hank Williams Sr. early on. “My mother always told me to be grateful for every gig, and remember to sing a Hank song. Then I found the genre we call ‘Red Dirt,’ and Mike McClure and Cody Canada had a big impact on me. I should also mention Mark Knopfler of Dire Straits. Those early records taught me more than any lesson I ever paid to get.”

As seems to be true in the journey of almost every singer-songwriter, there is the inevitable vacillation on how and where the journey with music is going to lead. “I’ve flirted back and forth with doing music full time, while at other points, it’s less of a part of every day. While I enjoy the feeling of being immersed in the craft, I’ve learned how beneficial it is to have a ‘life-rope’ for my well-being. In finding that, I grow even more comfortable in both my writing and performance. Without getting too far into it, I feel that music is one of many highlights of my life now, instead of the only thing to which I cling.”

Logun Timberlake is one of too many musicians out there, a great many of which roam the Texas music scene sharing their music as a beautiful part of life, and gets so much less notoriety than is deserved. If you’ve been a reader of my column, you’ve had the opportunity to be introduced to a number of them these last few years.

In his free time, Logun is a lover of cooking who enjoys learning as a way of life. He’s married to Tracy, who has also been a friend of mine for a number of years. We actually both married our brides last year on the exact same day. He’s growing to find that sweet balance between music, marriage, and life. “It’s not easy to figure out good time management skills, but I still work to set aside specific times where I can be alone and concentrate on tapping into the flow of creativity. As I’ve gotten older, it seems that when my personal life and responsibilities are in order, the rest kind of takes care of itself.”
Bringing the trifecta of tasteful and well-rounded musicianship, passionate vocals, and strong songwriting, makes Logun Timberlake a joy to witness perform. Follow his social links below, and if/when you have the opportunity to hear him perform somewhere around the Texas Hill Country, you won’t be sorry that you did.