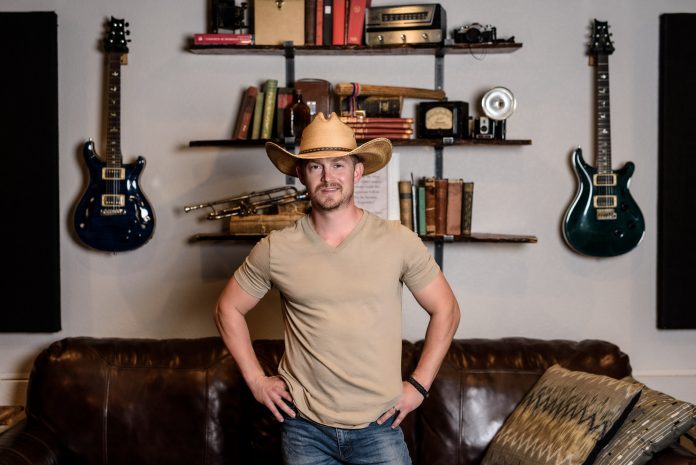 Country music. It seems to be a little bit of a theme for the column the last couple of months. I’ll reiterate, the current definition of “Country Music,” what you hear on the primary radio stations the last handful of years, the kind that makes obligatory mentions in every song about trucks, girls with tan legs, and not having enough beer is absolutely not country music. Johnny Cash and Waylon Jennings would absolutely beat the hell out of most of the “artists” nowadays. I told myself before writing this that I wouldn’t get into another rant about this topic, but here we are again. As you can see, I don’t at all feel strongly about this subject. Moving on… 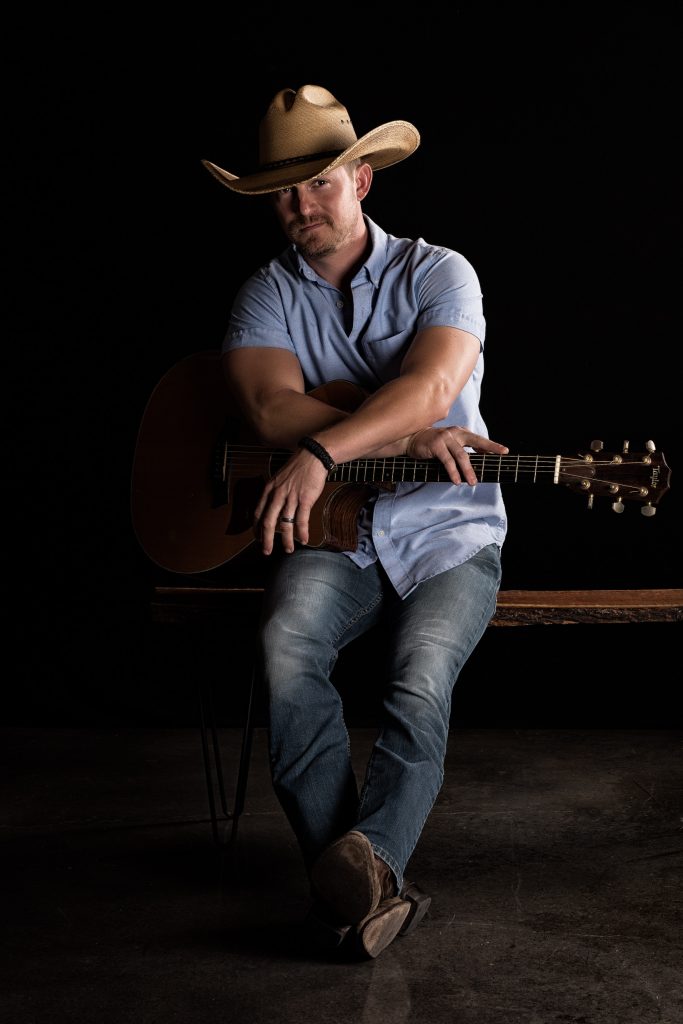 Echoing the sentiment of last month’s column, finding folks nowadays, especially in the younger generation of songwriters that are about the business of putting out music that honors the roots of country music is a rare thing. BUT, this month’s feature artist, Scott Wiggins, is another to whom I would readily give this sacred title.

Let’s get to know my friend Scott better. “My mom would always have Elvis vinyl records playing in the house. Those were my earliest memories of music. She’s one of those die-hard fans that would probably faint at an Elvis concert. I’d be doing my best hip shaking on her bed and playing the heck out of an air guitar. My dad also would play a bunch of Merle Haggard cassette tapes on road trips in his old Bronco. Merle is my favorite Country singer. So, I guess you could say, I get my Rock-’n’-roll side from my momma, and my country from my dad.”

As is always the case, the foundation of a musician’s performing days are incredibly enlightening. Understanding how we got to the point of being comfortable on and loving the stage, living off the adrenaline of performing, allows listeners (and readers) to gain a deeper appreciation for someone’s work. Scott shares, “My dad bought me a $160 pawn shop Alvarez acoustic guitar when I was about 16. I played a little then, but I was in sports, so it wasn’t very much. Then I broke my leg my senior year wrestling with a good friend of mine named August Peters. It was in his backyard and we were just messing around. I weighed about 150lbs and he was probably 220 plus. That moment broke my lower left leg in half and tore every ligament in my left ankle. Needless to say, I now suddenly had a lot of time on my hands not playing sports.

“That’s when I started learning a lot more chords and strum patterns. We didn’t have YouTube, this was about the year 2000-2001. I had a Walmart poster that had all the different chords you could play on guitar. I hung it on my door and just sat there and practiced. Before that, I would just sing out loud all the time. I would sing in the locker rooms walking around. I would sing Gary Allan tunes to the girls on the bus when we had field trips or track meets. My friends convinced me to sing at our graduation with another girl who could sing pretty good. I think we did Jo Dee Messina’s song, ‘Because You Loved Me,’ if I remember correctly. So, my first official time singing live was in front of thousands of people at graduation.

“I don’t think I sounded very good at all, but people cheered us on and that’s what left me wanting more.” I’d like to add, and it’s one of the things I appreciate about Scott, is that he’s not haughty about his talent. And the man is talented. Solid guitar player, great performer, and a hell of a strong yet soothing, authentic country vocalist. “After I graduated from Pleasanton, TX, I attended UTSA. Just after starting that new chapter in San Antonio, I entered a local karaoke contest at a small bar in Helotes, TX near the campus called the Cowboy Bar. It came down to me and a guy named Dave Fenley.”
Fenley has since become a fairly known name in the music world having been on TV through his deep run on The Voice. “He’s a great singer and artist, but I ended up winning the contest. That led to a Monday night song swap gig with Dave at the same bar. I don’t think he liked me much and thought he should have won. (HAHA!) The truth is, I think he should have as well.” But, Scott did win that contest, and it was another affirmation that he had something going for him, whether he was willing to bet on himself yet or not.

“I remember changing my strings before the song swap, and when we would play my guitar, it would be so out of tune and I didn’t know why. Dave asked if I had stretched my strings. I hadn’t. You have to stretch new strings a bit after you put them on, or they just go out of tune. I had no clue! I was about 19 at the time.

“After that Cowboy bar stint, I entered the ‘Colgate Country Showdown’ talent contest for the San Antonio area. At the time, it was like the pre-American Idol type show nationwide. I had to play at a local bar with an original tune I had written with a backing band I had never played with. I won the San Antonio contest and then moved on to the State competition at Fiesta Texas in San Antonio.

“There, I went up against a lot of good talent, but lost to Gabe Garcia and the Maverick Creek Cowboys. Gabe and his high school band got 1st and I got 2nd in the State Showdown. They were tight and deserved it. I was playing with the house band. I learned a lot though.

“In 2002 I moved to Corpus Christi because a lot of my high school friends had gone there for college. One of my best friends from high school, John Diaz, was with me at UTSA. We moved to Corpus together and used his financial aid money to buy his 1st drum set. We would go back to Pleasanton and practice random songs with a good friend, Angela Chapa. She had an old guest room we could get loud in.

“Once John and I moved to Corpus, I immediately started piecing a band together. We would play near the Lexington battleship at a bar called The Blue Ghost, which was the nickname of the ship. I think the bar is a gift shop now. The original band members were Me, John Diaz, Ricky Diaz, and Ryan Fedako. We had a couple of lead guitar players, Jason Farjardo and then Austin Gilliam, Austin being the main guy on lead in the following years.
“We had like 8 guys living in a 3 bedroom apartment, and would practice in the pool clubhouse twice a week. We sucked at first! We eventually started getting better and recorded a demo, and then our first full length album called ‘Only see.’ We had a girl that would hang out and come to the shows who was dating a local radio DJ named Colton Cruiser. He came out to one of our shows and we all became good friends. He put our very 1st song on the radio called “Mexico” on a station that back then was called ‘94.7 Badlands.’ The first time I heard a song I’d written being played on the radio was unreal! To this day, that is one of the most requested songs I get asked to play from my fans. I’m forever grateful.”

Scott and the boys kept playing, then moved to (guess where) New Braunfels, TX as a band in 2006. They were then getting opportunities to play bigger and better venues. They went on to record a second album that landed a few songs in the top 10 on the Texas Country Music charts. Wiggins continues, “One of those songs was called ‘Lonely Is Holding Me,’ and is another crowd favorite at live shows. Keith Davis was our producer on our 2nd album ‘Burn,’ and then again on the third album, “A Thousand Words.” Our buddy, Kevin Russell, was another important figure who helped us young kids stay on the road; he went as far as to help us eat and stay clothed! I think every band and artist needs a little help starting out.”

More exciting doors would continue to open for Scott on his musical journey. Ones which led them to opening for some of the biggest names in Texas Country like Pat Green, Eli Young Band, Randy Rogers Band, Wade Bowen, Josh Abbott, Casey Donahew, Robert Earl Keen, and many more.
Nowadays, Scott juggles his music along with his entrepreneurial spirit. Which follows being a family man. Scott and his lovely wife, Alicia, are the parents of two growing boys. Wiggins shares, “Right now, I have many ‘jobs.’ Music is and always will be one of them. I’m still trying to ‘make it’ in the music business, but now I have different goals and timelines as to when I want/need things to happen. I’ve always been entrepreneurial and always want multiple sources of income.”

Being a success in whatever it is, should never be confined to rigid parameters like how much money your work generates, or how many people recognize your face or name. Success is about fulfillment. It’s about purpose. It’s about family. It’s about growth. Today, Scott has developed a robust sense of what this looks like in his own life. “I’m trying to navigate the digital side of music marketing and the new technology that can be most useful to an artist these days. I’m focusing more on the craft, on trying to be a better guitar player and songwriter. I feel, especially in Texas, there is no age limit to this music thing. As long as you’re putting out quality music you can build a fanbase and play the rest of your life.”

You should absolutely check out Scott’s music, and if you’re able to catch him when he’s putting on a show, you will not be disappointed.

MUSICIAN OF THE MONTH: Jackson Parten