Shane Stolarczyk (I think I spelled it right) is our new County Judge. Congratulations. Chris Taylor, the long-time multi-generational family of Kendall County residents, ran a great campaign…as they both did. I’ve been watching this race from a distance, and for good reason: because it’s gotten sorta dirty. I don’t think either of these two men have done anything nefarious, but some of their supporters have. So let’s talk about that for a little bit.

First, we’ll start with some of the “rumors” that have been blasted around town: 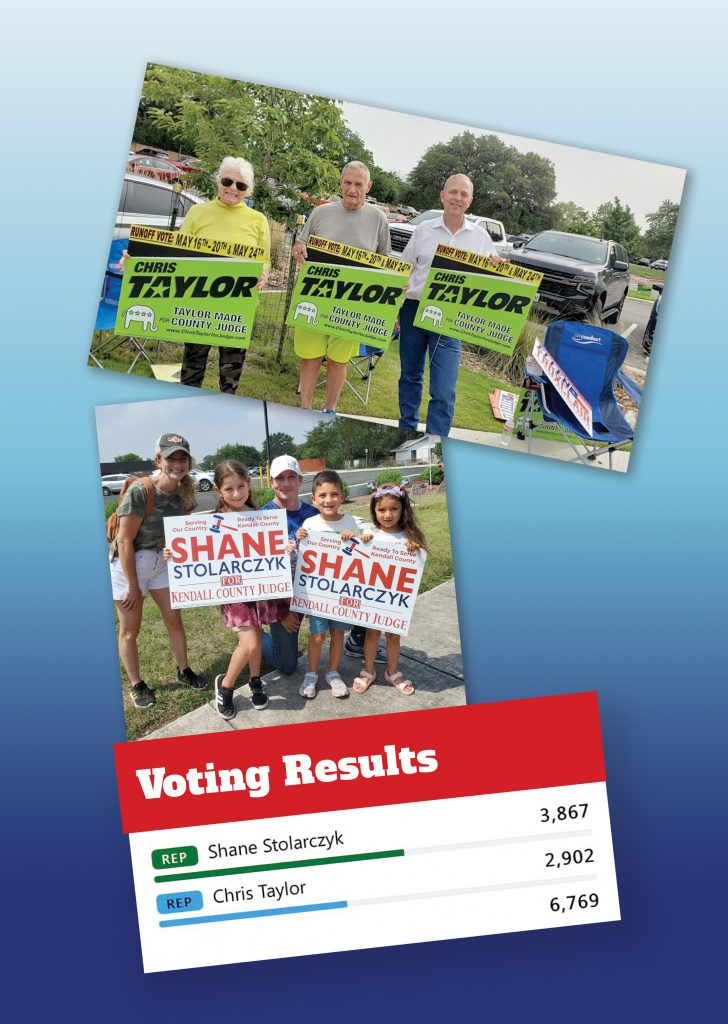 • Taylor is old Boerne. His family goes back several generations here and that’s a big selling point for him. Shane is relatively new Boerne and of course this bugs some Old Timers. From my chair damn near everyone in town is “new Boerne” just cause I’ve been here as long as I have, but whatever.

• Shane’s wife donated to Hillary Clinton. This obviously bent a whole LOT of folks for good reason. He distanced himself from this, but let’s be honest – it’s his wife – so either he agrees with the donation in some regard, or they have a unique marriage where they have wildly differing political views. I would think he was fine with the donation just because otherwise it wouldn’t have happened.

I could be wrong. I frequently am. However, this little nugget of info has been kicked around locally a lot.

• Taylor isn’t a lawyer and this makes him unqualified. Shane is a lawyer. I think this point is stupid as the County Judge isn’t a black robe judicial job and never has been. Also, being a lawyer isn’t something I’d brag about. Ever. So this point is a wash to either candidate.

• Shane is an “outsider”, and Taylor is a “yes man”. Shane hasn’t had the history here that Taylor has, so that means he doesn’t respect the history of the area, and Taylor is in Handren’s pocket so he’s going to do whatever he’s told to do.

• Taylor is “pro Gateway Loop” and Shane is “refusing to give a clear opinion on the matter”.

• Taylor has wealthy family roots. Shane is an unknown financially.

• Taylor can’t really assert an opinion on much of anything as he kind of tells you what you want to hear. Shane’s opinions are largely muddy as he hasn’t been very clear about them.

These are the main points I’ve taken from my Old Timer investigation over pints. I’m sure 90% of these points are incorrect. I mean that. I am sure they hold no water, and are largely based on rumor and innuendo. But that’s how small town politics work, right? “Did you hear that this Shane guy once campaigned for………..BETO??!?!?!” and “I heard that Taylor’s family used to own slaves back when the County was founded!” It’s just stupid. 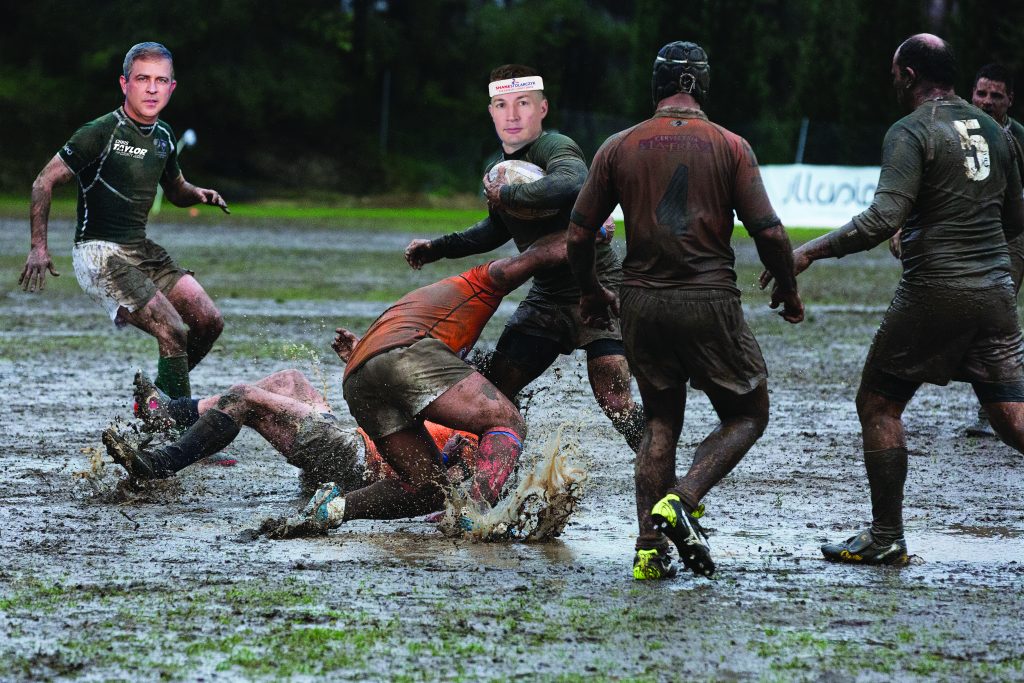 Sadly, this election has been like most every contested race in Boerne history and I think it’s interesting how we invite the things that we bemoan about national politics into our own little political races. I was telling someone the other day that the problem with politics is that it invites a particular type of person to run – and that’s one that is ok with a miserable process to get the job (power) that they seek.

There’s nothing “wrong” with that, but there’s a lot of great people out there that would be great candidates for these positions but we say “Nah – I couldn’t deal with the bullshit” so they don’t run. So kudos to these guys for trudging through the nonsense that many of us won’t.

What has bummed me out is watching the community navigate these races. Who remembers the Sheriff’s race for Al Auxier. Woah mama. It was a doozy. You talk about mud-slinging – it was a mess. Or what about the school board race with Erik Thormalen (and the other guy I can’t remember?) It was brutal. These nasty campaigns have happened in the past and I’m sure they’ll happen for so long as we have political races.
But why does this happen? And why are we surprised when DC is so broken…when even our local elections are a sloppy mess? What does it say about us as people? “Oh, you’re voting for the other guy? I heard that he once got a ticket for speeding in a school zone! CRIMINAL!” or “My guy is better than your guy. I mean, just LOOK at him!” Cause that just makes a whole lot of sense.

I have no great solution to this nonsense. Unfortunately I think it’s part of how we are wired as human beings.

This is also why I forever considered running for Mayor – I wanted to run a social experiment: I wanted to just say exactly what I was thinking about topics without a care in the world for whose feelings it hurt. “Gateway Loop? Um, unequivocally NO. I don’t care if every road in our county is gridlocked, I will NEVER agree to the Loop!” – you’d have no ambiguity as to how I felt, and you’d love me or hate me. “BISD School bond? Uh, HELL NO. The last thing we need is more debt. The kids can swim in the Creek for all I care – we’re not building a $4m natatorium!” Again, you’d clap and say “I’ll be damned. This guy is awesome!” or you’d say “I hate everything about him.”

But you know what? You’d not have much of a debate about who I am as a person. I’d have no confusion. “Old Timer is amazing and so blunt. I love it!” or “That guy is a grade A asshole.” I’m fine either way.

And why can’t all elections be that way? Stop telling us what we “want to hear.” Just tell us exactly what you find to be true. I’m not implying either of our candidates haven’t expressed their opinions clearly, but I do hear the debate of “I’m not sure what they think of the Loop” and “What about new developments! Who will stop them?!” despite candidates trying to get their answers out there. What about “Developments? I’ll shut ‘em down! I’ll strap myself to a damn tree if I have to!” People would snicker, but they’d also know your answer.

And maybe that’s my whole grumble: politicians are taught and sculpted into being able to answer a question in the loosest manner possible so as to piss off the least amount of people. And that’s too bad. Politicians have tough jobs and must make hard decisions. I’d want someone with the balls to make that hard decision and really not care who gets pissed.
Where are THOSE candidates? I’m not going to debate the man, but that’s largely why I think Trump has been so popular. Cause he didn’t give a rat’s ass who he pissed off and if he had a thought or opinion about something, you got his unfiltered thoughts on the matter.

Good luck to Shane and Chris. Both seem to be legit guys and are doing their best. By the time you read this, we’ll have a winner and the debate will be settled, but it’s another study in human nature and politics to watch it all unfold. Who knows – maybe I’ll run for Mayor next year and lay it all out on the line. I’ll either win in a landslide or be laughed out of town as the “crazy old timer guy.”

Though I bet you I’d take the win. And I’d absolutely clean this town up from top to bottom. Guaranteed. Vote for me.