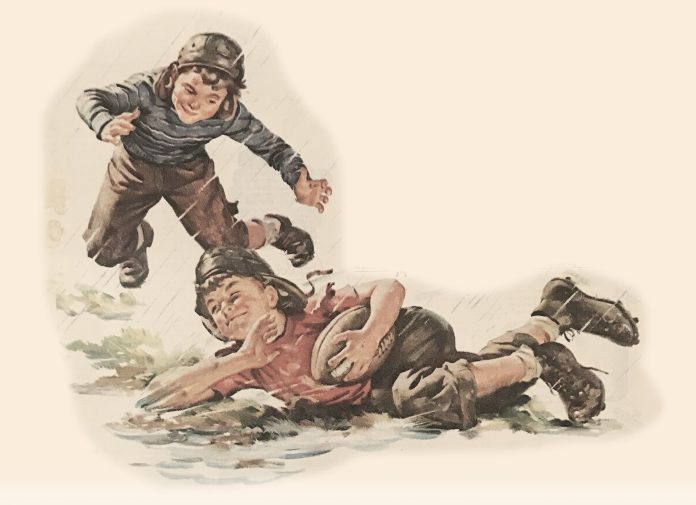 Oftentimes, life can be a series of mundane events, punctuated by an intense bright moment that you remember for the rest of your life. Some are good, some are bad, but all teach you a lesson.

In the 8th grade, I played football for the Boerne Pups. I tried out for quarterback, and ended up making the team as a wide receiver. I think that when you’re in the 8th grade, and the team didn’t really have a passing game, being the wide receiver was the coach’s way of saying “I won’t cut ya from the team, kid. Just go stand out there and block somebody”. Being a tall and skinny kid, I moved on to basketball pretty quickly – mainly because I stunk at football, and mainly because getting my brains jostled every day got old quick.

On the other side of the line of scrimmage from me in practice was a kid named Greg Noble. He had bright, SUPER BRIGHT, red hair and really pale skin that meant if he got flustered, tired, or embarrassed, his skin would turn this amazing color of red. Naturally, we all picked on him mercilessly. After every practice, all of us cool kids would tease him and see if we could get him worked up enough so that he would turn bright red. We always succeeded. I had him in a few classes as well, and I’m pretty confident that ol’ Greg’s days were full of constant harassment. He never lashed out, he simply took the ribbing and waited for us to be distracted by somebody else. I can honestly say I was never a bully, in fact, I often was the victim of teasing and bullying myself, and so I think that sometimes it was nice to not be the low man on the totem pole. I of course wish I could say that I was never mean to anybody in my life, but I have skeletons, too. He seemed like a good kid – he just made an easy target for most, I suppose.

He was new to Boerne, and I think that he moved away not long after he arrived, but not before he taught me quite the lesson.

Greg was a pretty typical 8th grade kid. Which means he was scrawny and clumsy. So was I. And every day, Greg and I would face off on that dusty old football field and bang our helmets into one another while we acted like we were blocking. One really hot day during practice, I was bored. We were just running the same plays over and over, and Greg and I kept banging into one another, and we were both miserable and hot. So I decided I would take out my frustration on him, and started giving him a hard time about the fact that his face was beet red. Greg took this as he always did…silently. So I kept going. He got more and more red, and when I was sure he would simply explode, he grabbed my facemask. He pulled me close to him and with his lips pulled back like a rabid animal, he seethed, “I’ve had it with you.” At first I was shocked, but noticing that the rest of the team saw this, I quickly recovered. “Oh, whatever Greg!!” I laughed and with that, the next play was called.
And because God has a sense of humor, it was a pass play. I lined up across from Greg, and he stared at me like he was shooting lasers through my skull. The play started, and I ran my route. As fate would have it, the quarterback threw the ball to me, I caught it, and looked up to run. To this day, I can still remember the rage that was in Greg’s eyes as he closed in on me.

He hit me harder than I had ever been hit, or have been hit since. He immediately knocked the wind out of me, followed by the ball flying up in the air, and lifted me completely off the ground. With his shoulder firmly planted in my mid-section, he pushed me back 4 or 5 yards, and then drove me with all of his weight directly into the ground. I laugh now, but I swear I remember thinking that there might actually be an indentation in the earth where I had just landed. Dust was all around us, I could barely breathe, and I remember staring up into the sun and mentally checking to make sure all the parts of my body still operated.
For a moment it was silent, and then the entire football team let out a collective “Oooooooooohhhh!” Greg stood over me panting, staring down at me with those bright red cheeks. And then the cheering started. The whole team took to a collective clapping for Greg, who looked around confused.

Players started coming over and patting him on the shoulders. Then they looked down at me and laughed. Greg broke a slight smile, and then looked down at me again. He slowly extended his hand and helped me up. He pulled me up to his eye level, I steadied myself on my feet and he said “Remember this. You ever bother me again, I’ll take you out.”
And you know what? I never messed with Greg again. In fact, I don’t distinctly ever remember being a typical punk 8th grader and teasing anyone after that football practice. I do, however, remember Greg being instantly adopted by the cool kids as one of their own, and he enjoyed a great rest of the semester with all the kids that used to give him such a hard time. Again, I’m pretty sure Greg moved away after that one year, but I can still remember him like it was yesterday.

And I have spent many an hour philosophizing about Greg Noble, 8th grade tackling machine. I sit on my porch as a grown man, and watch my kids play. Somewhere, Greg is doing the same thing. I like to think that Greg’s entire life changed permanently after that one football practice. I like to think that at his next school, he came in with a swagger and was quick to show punk 9th graders that if you mess with Greg Noble, he’ll have no problem teaching you a thing or two. I like to imagine that Greg went on to become class president, valedictorian, and a successful businessman and father because of the day that he knocked the absolute shit out of Ben Schooley on a dusty field in Boerne, Texas.
Above all, I think about Greg Noble because there’s a bit of him in all of us. We all desire to fit in, to be “one of the team”, and to have a little respect. Sometimes we have that, and sometimes we don’t. But we are all underestimated. Yes some of us have the internal bravery to confront what we want, and to violently take what is ours.

And I envy Greg. I envy him for the fact that he did something about that “underestimation”. He took the guy (me) that was underestimating him, and knocked me flat on my back. It wasn’t the violence of the act, it was the intent that I most applaud. An intent to prove not only me wrong, but everyone that had given Greg a hard time. I’m sure that he was scared, and tired, and angry…but he sat all that aside and exhibited a bright moment of passion and intensity that, even if all those other kids on the team forgot about, I sure as hell didn’t.

So I lift a glass to Greg Noble frequently. I like to think that God put Greg in my life for that brief year in 1988 to teach me a lesson, but also to teach Greg one, too. And I also like to think that when I’m faced with challenges and frustrations, that I can handle them with the same passion and ferocity as Greg. I hope that if presented with a bright moment in my life where I have a decision to make, that I can have the guts and bravery to take it all on, and to be left standing to applause.

Welcome to December. May you enjoy the beauty of the season and find that bright moment in your life. And may it take you in directions you had never imagined.

PS – I just spent an hour on Google looking for Greg Noble. I finally found him. He’s a family doctor in upstate Ohio. In his biography on his webpage, it says “Dr. Noble’s professional interests include sports medicine, pediatric care, family advocacy and office procedures. He has a functional knowledge of medical Spanish and enjoys fitness, literature, film, spending time with his family, and coaching his son’s football team”.