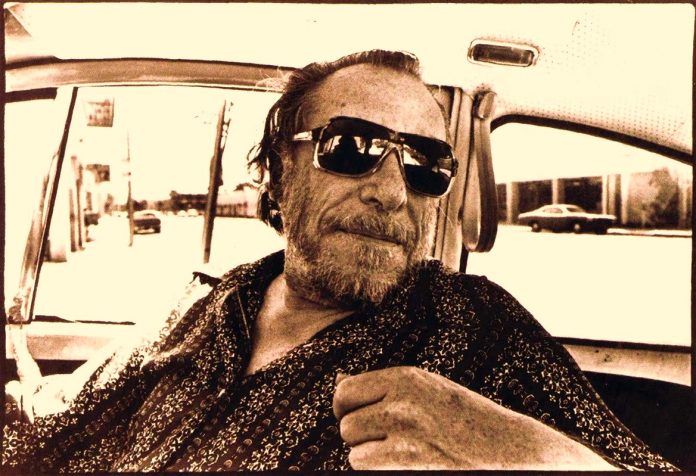 Many months ago I wrote this little column about perhaps the most famous poet of the 20th Century, Charles Bukowski.

No, I’m not big into poetry. It’s not exactly my favorite form of literature. But when I read a piece by this Bukowski guy I was intrigued. So I researched him a little bit and discovered that the man was an absolute trainwreck of a human being. Drunk, womanizer, slob, mess. And instead of being coy about this or hiding it, he simply pointed at it and said “Yep, that’s me. Take it or leave it”. This strangely endeared him to me so I told a bit of his story in this column and talked about how he resonated with me.

And people really REALLY liked that column. I received quite a few comments and emails about it and it sparked a lot of conversations.

Because of this, I read more and more of ol’ Bukowski’s works, and I post them to Facebook frequently (which is about all I post anymore. Blech, social media). As I did this, more and more people would comment to me about “that poetry stuff you post” and about how it spoke to them or they enjoyed it. Invariably, the poetry I post would almost always center on 1. his debauchery and 2. his hope to be better someday. That’s what pretty much every Bukowski poem was about.

I went to church yesterday for the first time in almost 2 years. It’s a long story about why I don’t go that I’ll save for another day. But I went and this woman walked up to me and said “Hey, you’re that magazine guy!” I get this type of introduction frequently. But she said “I really enjoy your column. Look – I have it right here in my purse. It’s about this guy Bukowski and I really enjoyed it. He sounds like a mess, but hey, he’s TRYING to get better, huh? Cool article! Anyway, take care!” and off she went.

So I was thinking this morning about ol’ Chuck Bukowski, and this silly article I write, and the lady from church. And I was thinking about the countless little columns I’ve penned here and why some get a reaction and some don’t.

And I came up with this: people universally resonate with people that are imperfect, know it, and are just trying to be better. Oh, and they’re HONEST about their imperfections.
My mom gives me a hard time sometimes cause she either says I share too much, or that I’m too hard on myself. She’s my mom, after all. And she’s probably not wrong, honestly. I probably do share too much, and I’m blisteringly honest about my stupid choices and silly thoughts that bounce around my noggin. But I also think that many folks read it and think “Hey! I do stupid shit like that, too!” And being people, we like knowing that we’re not the only ones that do stupid things.

I’m 46, single dad to 3 kids, and have been doing this job for coming up on 20 years now. I’ve made some magnificently stupid choices in those 46 years, lost my only younger brother to cancer, have tolerated some ridiculous relationship insanity, and spend way too many nights staring at the ceiling contemplating the stupidity that I create in my own life.
And then I tell you, dear reader, about these struggles of mine month over month. Sometimes I try to make it “lighter” and tell a fun story or talk about something uplifting, but as a general theme, I’ve realized that I spend a lot of my energies hand-wringing over my mistakes. There’s probably something there for a therapist to help me with, but for now, these written words function as my therapy as ultimately I’m left reminding myself that I’m not alone in my failures as you as well have surely stumbled.

And I think that this universal attraction to relatable content regarding one’s struggles is quite interesting. Because one of the other themes of this column is this: We are ALL the same. Sure we look different, worry about different things, and have different priorities, but ultimately we all basically have the same insecurities down deep. And I really like that about PEOPLE.

I’m no Charles Bukowski. Thank goodness. A well-known drunk, womanizer, and had this delightful propensity to expose himself in public. Delightful. Before becoming famous, he worked at the Post Office, drank himself stupid nightly, and would sit on the floor in the post office with his typewriter and smashing out his angst until he passed out, brushed his teeth in the employee bathroom and repeated this until he was nearly 50 and some little publishing company took a chance on him and, well, the rest is history. Thankfully, I consider myself a wee bit more refined than Charles.

That said, his writings mainly consisted of this message: “I know I’m not good. But it’s too hard to try to improve. So I’ll find the beauty in life amongst the carnage of my choices. You should do the same”….and man, that’s some depth and urgency and depression and hope.

And as I said, we’re all the same right? So that’s basically the message I suppose I’ve laid out in this silly column for going on 16 years. I put myself down about some of my stupid choices, moan about my inability to make fast changes to improve myself, and in the meantime try to celebrate the good that happens around me. Rinse and repeat. I suppose that’s my “demon” I try to exorcise: peace with myself and the grace to love. I’m not good at either, though I long to be.

Same as it always is, I suppose: be kind to yourself. You’re not broken. You just hurt. Same as me. Same as everyone. And I know you’re trying your best, despite your daily failures. Same as me.

I have a pastor friend who is a bit of the anti-thesis of a regular “pastor friend” around these parts. He wears all this weird jewelry, has tattoos all over himself, and even wears a bandana when preaching that makes him look like a damn gang member in his white tank top undershirt. I love the guy. I love the guy cause I can call him and said “Man, life just sucks. I hate my job, my kids are a mess, I’m broke…and I’m just fucking angry.” And instead of giving me some stupid nonsense about praying more or seeking God….he just says “Man, ME TOO.” And I’ve always loved that about him. His quickness to accept my failures, profess his own, and to relate to me in my brokenness. What kind of pastor does this? They always say “Well Ben – God loves you and you should just read the Bible more and pray hourly cause God will save you!” and none of that is untrue, I suppose. But it’s not relatable during an honest confession, which is what we all need sometimes.
So that’s my confession.

In the end, I hope that you’ll just remember this as you traverse this spinning blue marble. Man, we’re ALL broken. We ALL make stupid – MAGNIFICENTLY stupid – choices. And then we hurt as we experience the consequences. Sometimes we take those stupid choices and double down with even dumber choices as we process the fallout and take up women or booze or whatever else. It happens. And every single person you encounter can relate to what I just said. Including you.

So stop being “cool”. Stop lecturing people. Stop speaking down at folks, even though you’re doing so from an honest position of “trying to help”. Just get down on their level, throw an arm around them and say, “Me too, man. Me too.”

Cause the broken person is an honest one. And the honest one is far closer to healing than the one that just wants to hide their brokenness.

And so as I close yet another ramble, I’ll leave you with this: Keep stopping me on the street and telling me you liked some article about how messed up I am. It’s the best reminder that yes, I am broken. But so are you. And that makes us friends. And I can’t have enough of those.

Welcome to September. EXPLORE your heart this season, inventory your bumps and bruises, and get out there and hug someone else that is hurting same as you. And make a friend. Because you need those as much as I do.