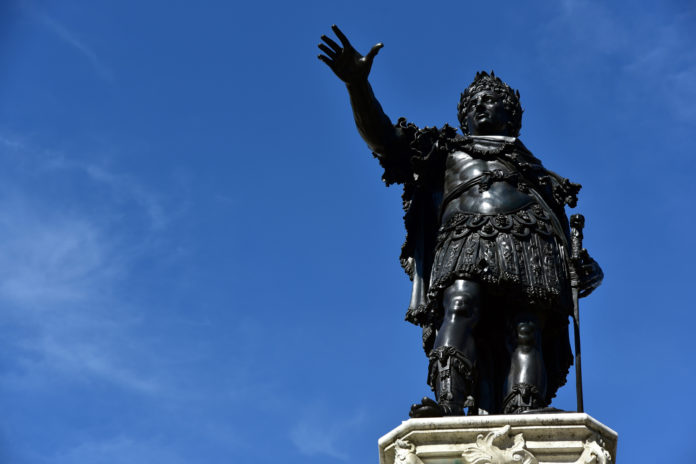 AAugustus was the greatest of the Roman Emperors. It helped that he was the first and basically wrote his own job description, kinda like George Washington did. But he still oversaw the consolidation of Roman power throughout the Mediterranean basin and expanded it mightily by projecting military force when needed and by bringing peace to the provinces with a mixture of the carrot and the stick.

History has been relatively kind to him, but one phrase of his sticks out in my mind:

I lived this one for the last 10 years, probably. In nine years, I had four chances to right the wrong that my father had wrought in leaving ministry because of an affair, divorce and disgrace. Four times my now ex-wife decided to kill my dream by saying, “our marriage isn’t strong enough,” I lost focus. This after 9 years in seminary and five years in a field that was not at all fulfilling and didn’t really pay the bills.

All that was left was my family, such as it was. But preserving a marriage that was powered entirely by me financially, emotionally and relationally was not in any way possible. That kind of thing isn’t really a goal as much as it is rescue operation. You can’t really creatively live like that. It’s not about moving toward something as much as avoiding something.

Eventually the pressure got so great that the situation was untenable for any of us. It had been decided from on high that all responsibility for the marriage and its health depended on me as the “spiritual leader of the home.” When the fifth counselor looks at you after your wife says her role to play in the marriage is to be “here” and nods his head in approval, you’re at the wrong counselor. Again.

Well, guys, a leader without anyone following him is just a guy out for a walk. And that walk isn’t really going anywhere except in circles.

In those days I made haste, but not slowly Everything was just about walking on the eggshells in the house and being someone I was not so that someone else would love me. All because a third someone, in this case, an institution, absolved the someone else of any responsibility.

There really was nowhere to go.

Funny thing is toward the end of that, I started making and achieving goals for the first time in a long time I became my motivated, driven self. I stopped worrying about what the kind of people who order vegan hamburgers at Burger King call, “microaggressions” and started living a goal-directed life.

After that crashed and burned, I began making even more haste. I took to heart what Teddy Roosevelt said, namely, “ceaseless action can defeat despair.” TR went out west after his mother and first wife died within a few days of each other and worked his way out of what must have been the mother of all emotional funks. My own attempt at this therapeutic trick was not nearly as successful.

I was living the second possible way of living life, that is, going through the motions of doing stuff for the purpose staying “busy” but with no overarching plans or hopes or goals. It’s not really living, though.

You work 80-90 hours a week but wonder why you can’t “get ahead.” You grate on people. You let things go that you shouldn’t. You run from pain rather than embrace the lessons and adapt. You numb the pain with substances and risky behavior. You act like a moron because deep down you know you aren’t moving in any direction, but you’re tired and you want for the pain to stop, if even for a second.

It’s an epicurean lifestyle. “I work hard, I play hard,” is often these people’s motto. I know it was mine. If I wanted something, I got it. Anyone who got in my way was quickly brushed aside.

The truth about living like this is that it doesn’t work. At all. Eventually, your body pays a price. Your health pays a price. Your relationships, such as they are, evaporate. You lose touch with why you’re doing both the busywork and the pain-killing activities.

It’s all just something to do.

Ceaseless activity does not defeat despair. I may have taken Teddy out of context, but the way that I tried it was a complete, total and utter disaster for me and for the people around me.

Then one day it hit me. I hadn’t asked myself what I wanted in years. What would make me “happy” (more on that in a minute)?

I felt kind of stupid when I made that realization. Who exactly had I been living for all of these years? Well, as long as I felt the weight of my father’s failures I was apparently living for him. Then I was living to try to make another person happy so that she would love me.

But what the hell did I want? I had no clue.

It certainly wasn’t achievement. I had accomplished a lot of the goals that I set out for, a specific job notwithstanding.

It wasn’t “togetherness” because losing my ex-wife changed me from being a guy who was prescribed pills for depression to being, by comparison, a nuclear-powered ray of sunshine. I miss my children, who she withheld from me as much as humanly and extralegally as possible, but not her. Although I have my differences with Southern Baptist marriage counselors, I still find the Bible to be quite authoritative. Especially that proverb that pops up on several occasions that, “it is better to live on the corner of a roof than with a bitter and contentious woman.”

And what about happiness. I could look at my kids in a horrible situation, living with the shrew and being watched by her sister who is three times her weight and twice her bitchiness. But they were happy. Sad about the divorce, of course, but in all making the best of it.

Well, it’s because they hadn’t learned how to be unhappy. They were just living their lives, such as they are. In a compromised financial situation, yes. Without the parent who shows them how to handle the slightest of life’s disappointments without going into a fit of entitlement and hollering. Without a lot of things. But still happy.

Then it dawned on me that they hadn’t chosen to be happy. They just were. And if they could be, by God himself, so could I. It became a moral duty to choose to be happy. To be grateful for the coffee pot and the running shoes. The great boss who encourages me to succeed and expect my very best, despite the fact that she’s gonna get paid no matter who individually is successful. For the clothes to wear and the car to drive and the health that I enjoy which is probably better than it’s ever been in my life.

Sure, there’s plenty of things to be unhappy about. The loss of seeing your children 12 days out of 14 is at the top of the list. Not far down the financial ruin that threatens me because of a divorce decree that would make Genghis Khan blush in embarrassment. (At this time, I’d like to extend a gigantic middle finger to all family courts across the width and breadth of this great land. Happily, of course. Make it two middle fingers, actually.)

See, my Dad was able to take away my self-worth as long has his sins were my fault. The churches were able to hold onto it as long as they sent me those stupid form letters about how they hoped “the Lord would continue to guide me” when they didn’t like my resume and I cared. My ex was able to take it away as long as her approval – with the attendant keeping of my money and my kids – was all that mattered in life.

Well. Jimi Hendrix once said, “I’m the one who has to die when it’s time for me to die.” If you won’t die for me, you don’t get to live for me either. And don’t get all religious on me and give me a lecture about how Jesus died for me. I know that. But Brother Bubba at First Baptist Podunk didn’t, and would probably kick Jesus out of his church if he were to show up all Middle Eastern looking and preaching about helping the poor. They’d call him a liberal and try to crucify him again, only this time on Twitter. Maybe.

So, step one is deciding to be happy. Regardless of whatever else happens. Taking the power back.

How do you stay that way?

I am happy because I have decided to be. I will stay that way because I will make progress, however slowly, in the direction of a life that I want to live. A year ago, I would have given anything for the chance to see my kids. Today, I spent the day with them and gave my daughter a guitar a co-worker gifted me. She and my older son and I sat around my living room as we taught her chords. We ate a couple of meals together.

A cute little 21-year-old was helping us at a store. I thought nothing of it. When we left, my daughter said, “Dad, she was so into you.” It was funny to hear that. I remember the night my daughter was born and how she fell asleep on me. Now she’s giving me dating advice because apparently my radar doesn’t work anymore.

I have goals that I set. I have a direction and I make progress toward where I want to be every day. I choose to be happy and unlearn what I have learned. No one will ever earn the right to take that away from me again. Not my kids, not a woman, not a job, not a government, not a religious leader.

From my days on sailboats, I learned that the fastest pilot is the one who can chart the steadiest course. It’s not the guy who goes chasing the strongest wind currents to make the boat go the fastest at that moment, but the one who can adjust the sails and the rudder to maximize what they call speed over ground with the right course over ground that wins regattas.

And life is a regatta, not a drag race. I hesitate to even say this, but maybe for the first time in my life, I don’t wake up wishing I hadn’t. When I was a kid in a house full of domestic violence, there was a sense of foreboding that made me scared of life. Fear of life leads to a relative comfort at the prospect of death. It’s unknown, for sure. And I don’t care how religious you are or how well you know, “When We All Get to Heaven,” nobody really wants to go today….

Living for other people’s gratification or desires is its own death. Because you can’t really be useful, be of service to another person, or help someone else if you are so concerned with their opinion and their approval that you aren’t you.

Ironically, I can see how the new me, the real me, is vastly superior to the old me in every way. By focusing on me and what I want, I don’t hold back. Because I don’t bottle things up, when I have to say something less than flattering, it’s at the beginning of the life cycle, fresh and not musty, molded and simmering. I have more tact than I ever had before.

Progress is slow, but that’s okay. Because I’ve decided to be happy along the way, I can celebrate any little bit of progress. And I’m genuinely excited that the best is yet to come.