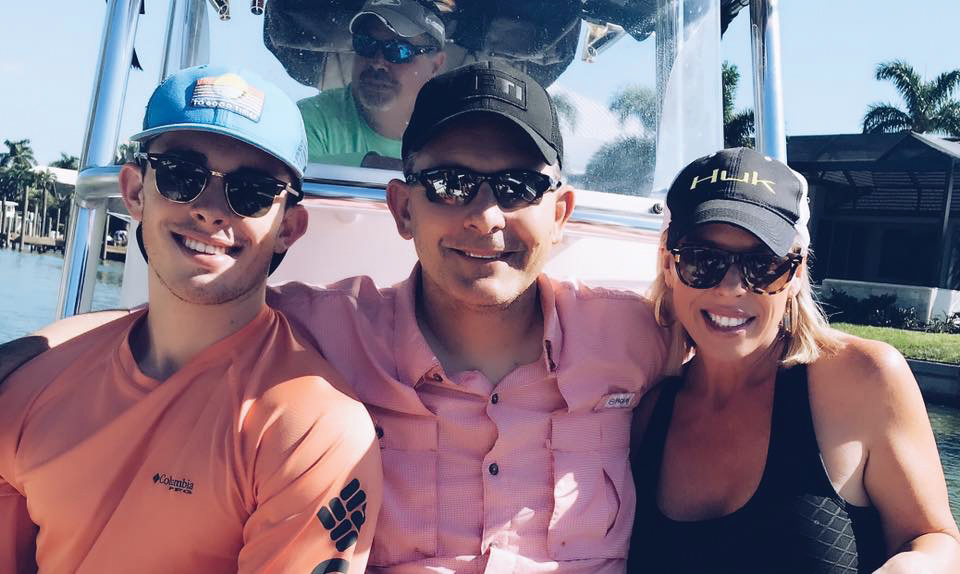 Alan, from El Campo Texas and graduate of Texas State University, began working for HEB right out of college and met his bride while she was attending UTSA. Together, Alan and Mandy Kohutek had a clear vision of how their life would play out and what it would look like. Visions of a future stay at home mom, hard-working husband, two kids, one dog and a beautiful home described their plan and expectations for a wonderful and picture perfect life. After three years of marriage and the birth of their son, Cody, they were certain all they planned was set in motion and sure to come to fruition.

A beautiful Sunday afternoon in June, on their way home from a wedding with family would change and challenge them beyond comprehension. The plan Mandy and Alan had for their lives faced its first and greatest trial 7 weeks before that fateful day in June. Mandy was expecting her second child, a boy named Hunter, she was full term and had nothing but normal feedback from doctors throughout her pregnancy. Mandy recalls, “It was a Friday and I went to see my doctor because I thought I was going into labor. After checking with the doctor I was told I needed to go home and wait for my water to break or more indication labor was imminent.” Following doctor’s order Mandy returned home and she and Alan patiently waited for Cody’s brother to make his way into the world. The following Sunday Mandy was sure it was time, so they both rushed to the hospital where Mandy gave birth to full term, 8 pound baby boy who had no heart beat upon birth. No indicators or warning were given to Mandy or Alan. They were left broken and stunned. Experiencing pain beyond recognition or expectation. Through tears Mandy explained, “We didn’t know what to do. We buried our son and thought we would try again later. So we prayed and kept on living life.”

Seven weeks later, on that day in June, Alan was driving their Tahoe with Mandy, her sister and cousin and two small children in the car headed back to San Antonio from a wedding in Kingsland. Mandy said she still remembers the exact moment and sees in clearly to this day, “ A trick in front of us was pulling a trailer with a vintage car on it. A disc flew off the car and was aimed to collide with the windshield of our car”. Alan swerved to miss it and in doing so the Tahoe was propelled into multiple roll overs. “Once we finally stopped, I remember looking over at Alan and said ‘Get out. Hurry, babe, we gotta get out’.” During rolls the roof of the Tahoe had pinned Alan in the driver’s seat. Alan responded to Mandy’s urgent instruction, “I can’t move, something is wrong. I think my legs are broken.” There was no blood. Everyone else in the vehicle appeared unscathed. First responders finally arrive and the jaws of life are used to extract Alan from the crushed Tahoe. Alan was airlifted to University hospital and Mandy recalled being wheeled in with him where she was shocked to see close to 60 people waiting for them to arrive, to provide support, love and prayers. Coworkers from close to ten years of working with HEB lined the halls with family and close friends. Charles Butt himself made it a point to be present without fail.

“I was checked out and just waited to hear about Alan.” Before long Mandy was informed her 6’0 tall, 200 lb., softball playing husband would never walk again and was expected to be a quadriplegic. Upon hearing this news Mandy remembers thinking it was a bad dream, everything would be okay, it would work out and Alan would be cured.

Then Alan got the news and was so very angry, he told Mandy, “You can’t live with me like this. You can’t do this and live with a paralyzed man and Cody have a paralyzed dad.” More news of Alan’s prognosis continued to pour in, “He may need a breathing tube they were told and will need full time, around the clock care but I was in denial. No. That’s not husband.”

Alan was in ICU for ten days and hospital for 6 months to include intense therapy and rehabilitation. “I was at the hospital in Houston every day from about 8 am to 10pm either in classes to learn about the injury and how to care for Alan or just spending time with him.” When Mandy wasn’t at the hospital she was trying to worl out the rest of her life while staying with Alan’s sister and spending as much time with Cody who was being cared for by Mandy’s parents while they navigated the prescription of what life was not going to look like for them. “I can’t say I was always positive. But I couldn’t sit here and watch this amazing man die. I had to hold it together. Our family was with us all the time so laughter and love kept me going.”

Alan endured a partial sever C5/6 of his spinal cord. At first he couldn’t move his neck or arms. Only his eyes and face would move. After months of rehab, slowly he regained movement from head to under his pectorals but continues to have limited movement of his fingers. “He has maintained feeling throughout his body, though many areas have dulled sensation, but we didn’t know this until after a few month and that was major news for us. It gave us a light at the end of the tunnel.”

Many of us can’t imagine a plot fated us life was gifted to Mandy and Alan. Yes, I said gifted. The power in their story they share with sparling eyes, big smiles and a depth of character and strength too vast to describe, “I never questioned not doing this with him.”

Days came and went, with the best care and medical team personally recommended and fed by Charles Butt himself. “I went through the motions but mostly I think I was in denial, then I remember coming home for two weeks and we pulled into our driveway and realized Alan couldn’t get in our house and we lost it.” In true fashion, without wavering HEB put ramps in their house while they waited for a new home was built for them that would allow Alan and Mandy to have the function they needed to move forward creating a new normal.

The plans they had for their life when they got married had changed without warning, but they never quit, “I had to do it for Cody and had to be strong for Alan.” The new normal was different on the outside, but the inside was the same. Their lives had been built on dedication to each other and family. As they re-designed their plans and expectations, Mandy struggled, “I didn’t know anyone in a wheel chair, I just didn’t know how we were going to do this.” The support of family and friends got them through it with unrelenting affirmation, “Treating us normal was the lifeline for motivating us to push forward.”

Alan’s strength and Mandy’s dedication kept them rolling into their new normal. Alan established goals in an effort to give him reason to live. He wanted to work, to drive, to feed himself, and much more. He continued rehabilitation and eventually learned to bath and dress himself and even if it took hours they learned systems to make it better and faster, together.

Alan went back to work the following January after a visit from the executive team at HEB expressing their desire to continue his employment where ever he wanted. He found an open position in data and analytics, interviewed and humbly accepted the offer acknowledging, “I may type a little slower and it may take me longer to do some things but I will do this job well.” Without question HEB knew he was the man for the job and from that moment on the new normal began to feel a little more familiar.

Mandy will hesitate if you ask her what she learned throughout this change in life plans because she is too kind and humble to dote, but after some prodding her sense of humor overflowed into response, “ I guess I’m strong, stronger than I ever thought I would be and I have always been a positive person.” She corrected herself, “I make a choice to be positive.” She continued and explained, “your plan is not God’s plan and I had to learn that.” Mandy and Alan survived the unthinkable, but Alan stands firm to this day that having a stillborn child was harder than being paralyzed. Surviving both of those tragedies as individuals is not for the faint of heart. Staying married and strengthening a relationship in light of those things is unheard of, “We must have a purpose to have made it through all of that. We have a choice to dwell or make the best of it and with a 3 year old child staring up at you, you find a way.”

Alan and Mandy looked for the lights along what was a new path toward a plan decided without their consent and to this day encourage others. Doctors don’t tell you what is possible, you must find and build on what each day brings. Alan’s message to anyone who has encountered a similar experience or who struggles with overcoming physical obstacles, “Give it time, tomorrow is not going to be what today is and always believe in the possibility.”