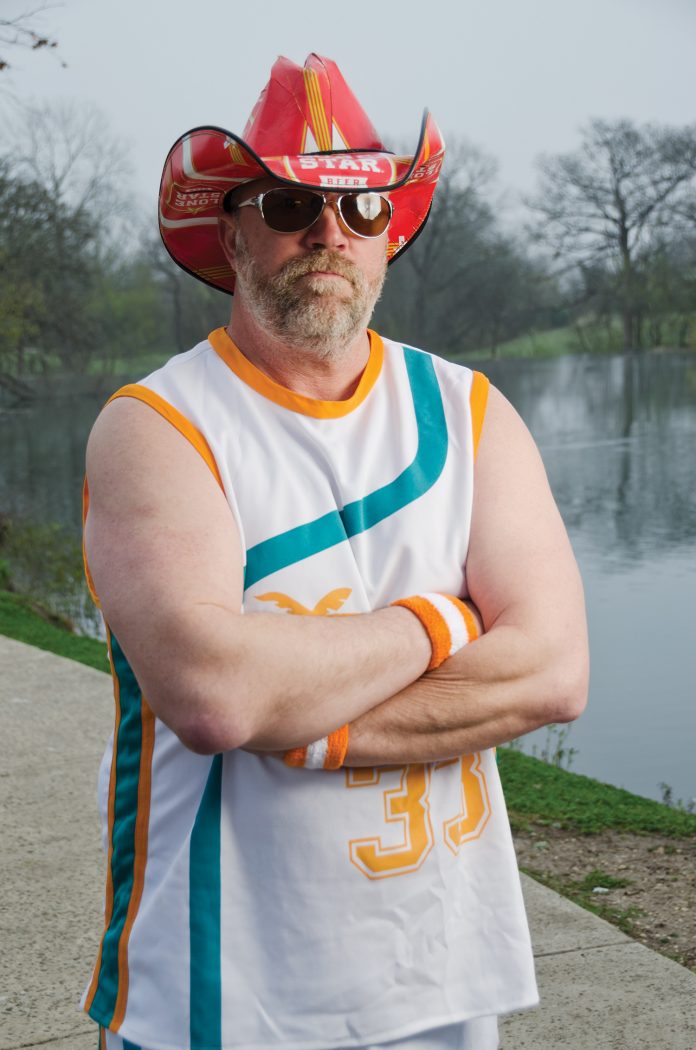 EXPLORE is all about the characters that make this great place what it is. Artists, musicians, chefs…and then we also have guys like Jay Milton. Last month we lost Jay suddenly, and our area lost one of the more endearing characters that made Boerne what it is. A successful businessman, Jay spent his non-working hours basically just having fun. From beers at the Cibolo Brewing Company, to being the brains behind the viral .5K, to countless other little misadventures, Jay helped shape the area and made it a hell of a lot more fun. When we saw his obituary, we just knew that we needed to make space for it as we couldn’t remember a more epic obituary, and one that captures the true essence of the guy.
So here’s to you Jay – we’ll continue the fun together someday soon.
Sincerely,
All of us at EXPLORE 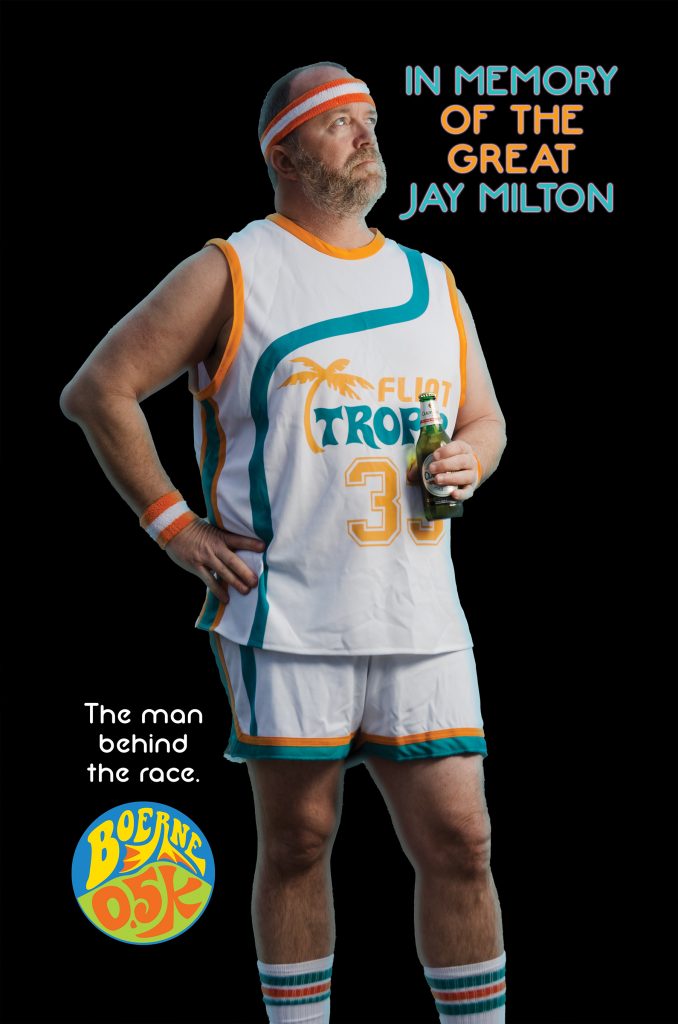 Jay is predeceased by his father, John Milton and his brother, Steve (wife Heather, sons Zak and Jake). He is survived by his mom, Betty Wolf; step-dad, Jim Wolf; step-mother, Jean Milton; and sister, Libby Tabaka (her husband, Jason, daughters, Ellie and Jill and son, Charlie). His other family, hundreds of best friends, are far too numerous to list, nor would they want their names in print associated with Jay.

Born in the small town of Stillwater, Minnesota, Jay grew up a gifted prodigy destined for much larger outreach. He decided that there was no better place to make his first global impact than from several hundred feet below the ocean’s surface, serving on a Navy nuclear submarine.

After spreading his life-enhancing influence on tens of men in the U.S. Navy, Jay knew he had to leave his mark on the mother of all states, New York, where he cleaned horse barns at the Saratoga Springs Race Course. Though the prideful scholar fell short of Manhattan stardom, it was in Saratoga that he found his inner cowboy. It only made sense that Texas one day be his final resting place … more on that later.

Before settling on cowboy hats to highlight his flowing locks, gaudy buckles and everyday walking boots, this below-average hockey player from Minnesota took his proclaimed talents to Irmo, South Carolina. It was there that Jay opened a rink, “The Concrete Pond,” and surrounded himself with people he could be superior to while teaching the locals the sport. In refereeing, Jay found his true calling because he was always kind of a “life referee,” pointing out the good from the bad, and he hoped this would quench his thirst for telling people what to do. Jay, channeling his inner-Ted Lasso, became a South Carolina hockey legend and is now enshrined in the state’s Hall of Fame as the best former player, coach, referee, and league administrator. To this day, he is revered by hockey MILFs up and down the South Coast.

Following hockey retirement and proactively in search of his own future new liver, Jay switched his focus to the medical industry — organ transplant to be exact, where he hoped he might quickly move up the list if ever in need. This, along with Jennifer’s accelerated climb as one of the nation’s finest organ transplant minds, was his ticket to Texas. He became a distinguished businessman and leader because he would hire the state’s brightest people to do great things, while he did absolutely nothing. This led to the sale of a highly sought-after company, projecting Jay into “fun-employment,” what others call early retirement.

Outside of work, who really was Jay?

A pragmatic Midwesterner to the core, and the self-proclaimed “King of Pet-Peeves” and grievances. If you referred to children as ‘kiddos’ and dogs as ‘fur babies’ it would piss him off to the core. Blowing your nose in a restaurant, failing a zipper-merge, or backing into a parking spot awarded you the Milton Stink Eye and official “Douche Tool Status.” (Don’t get us started on fly swatters.)

Jay was a great father. For his daughters, Hannah and Coan, he set them up with their first businesses (above the table of course). When Coan, who was only 12, needed Jay to sign off on something to get her into her business as a soccer referee, he gladly agreed. When she told him last second that she needed to be 13 and he needed to “cover” for her, he again flashed the Milton Stink Eye and agreed that she was 13. When we asked Hannah if she remembered anything funny about running her business with Jay, she said not really but he loved being a boss. One night after coming home from a concert, he was carrying a sleeping Hannah into the house. She semi-woke up and sweetly said, “Daddy, make me a stage”. Wasting no time, the stage was constructed by the following morning, which provided a home for five years of Hannah’s concerts, not one missed by Jay, her biggest fan. It was also a place where they shaped their love for karaoke, only after a six-pack of beer of course (Jay drank 5 beers, Hannah only had 1). The spotlight inflated his ego as he pretended to be Simon Cowell. He was also exceptionally gifted at raising boys as he learned when, three years ago, he met the 32-year-old son (Aaron) he didn’t know he had. Thanks, Ancestry.com!
Ultimately, Jay was a good man, some would argue a great man, but it bothered some of his friends when he’d randomly trip old ladies, slap a beggar, or take money from the tin cup of a panhandler.

Jay was a great friend and a mentor to many. In fact, it was Jay that Justin Bieber turned to when he was struggling in his career, and Jay’s advice resurrected “The Biebs” and launched him into stardom. Unfortunately, for the few Hanson fans out there, that same advice from Jay didn’t go so well. MMMBop!

He was highly organized and the ultimate gatherer of degenerates. Many called him the Quentin Tarantino of producing and organizing useless events. Such classic events include the Boerne Grilled Cheese Festival and World Championship, where “no damn meat” was allowed and everyone was constipated for days, (there’s that damn referee complex again) or the annual camping S’mores competition in which every entry scored a precisely tabulated 97.3, so no one felt like they won, except Jay who got to eat and judge them all. For camping trips, Jay compiled a 5-page checklist, even if the camping was simply sitting around drinking and staying in air-conditioned cabins. Other events included the annual JenFest, the mother of all birthday tributes to his Dollface that rivaled the Oscars, Mother of the Year (MOTY) awards for the most-deplorable moms, a Cornhole league where no one was allowed to be a “ringer” and the Daddy of them all, the Boerne 0.5K!

The Boerne 0.5K was a sort-of-annual-ish event where underachievers could still get a prize and have a fancy sticker with their accomplishments on their car. People could pay more to do nothing at all. The third 0.5K race was so successful that competitors just had to stay in their homes, locked down, and do absolutely nothing — a complete success!

Jay claimed that he and the Boerne 0.5K were responsible for the single largest beer sales day in Boerne history!

His therapist, or bartender as most would say, said the reason Jay organized all those events was that he couldn’t accept the repeated and humiliating failure of his Chocolate Chip Cookies to win the Blue Ribbon in the Kendall County Fair. He determined that when he organized his own events, he didn’t have to worry about the corruption of the blue hair Cabal.

He entered those cookies in the Fair every year with only heartbreak to show for it and finally had to lure a female friend to submit his entry, hoping that would help — it did; He took home winnings of $3, of which he cashed and spent, making him the only person not to donate their winnings back to the Fair.

Music was a significant passion of Jay’s, and many people don’t know that he had a long career as a recreational, non-pro sound engineer, critic, and audiophile. All the sound mixers in Texas are going to miss him, and frankly, there’s no telling if they’ll even know where to set up their equipment without him standing right in front of them and giving them the Milton Stink Eye. 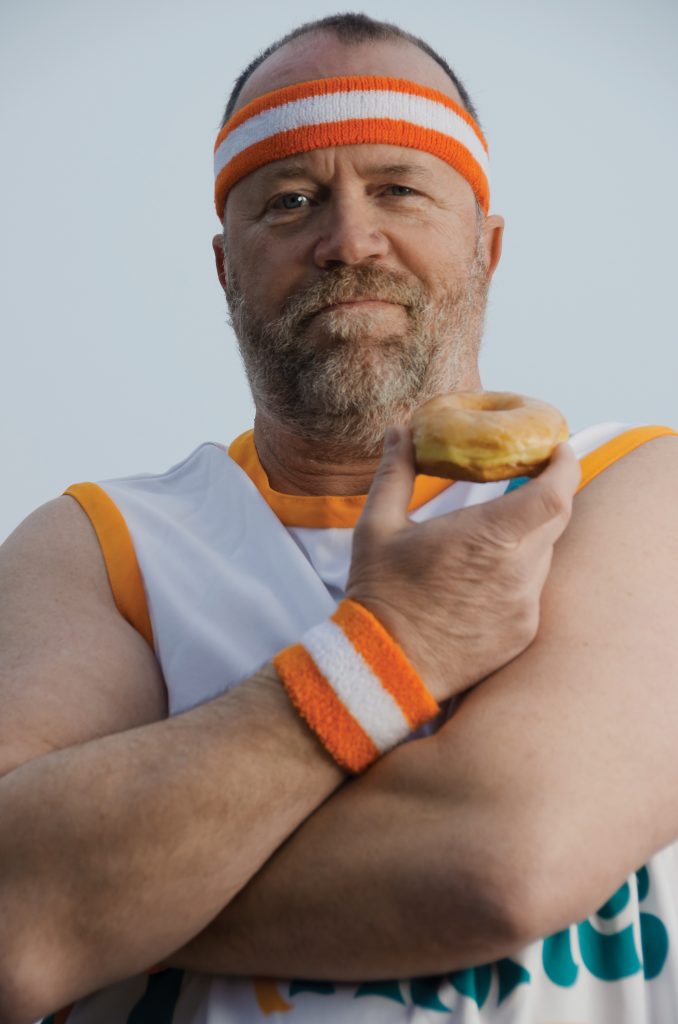 Jay held many records for consecutive concerts attended without ever having a conversation. It bothered him greatly when the “little people” around him couldn’t commit to the same level of silence during a live music event. It bothered him so much that he started organizing his own concerts at his home, which was called the Milton Ranch and Shotgun Compound. At these concerts, he could control the “little people” and mandate silence. It was common for him to shun and expel people if they were even thinking about speaking.

He had a passion for travel, quick trips, where no level of any physical exertion or touristy activity was ever tolerated. Trips to Jay were only to be shared embracing local vibes over one long continuous beer, where he would laugh uncontrollably nonstop with his closest family and friends, sharing in experiences that would far outlive Jay.

One of Jay’s last gems was an overstayed visit to Key West. Walking the back streets in search of unknown neighborhood pubs, Jay came across a hole in a wall that seemed to fit the bill. He was met by a guy out front and as Jay asked if the bar was open, the man uttered “yes, but this isn’t a bar, it’s an AA facility.” Jay was quick to of course thank the local saying… “I guess this isn’t the place we’re looking for.” After a long pause, and giving Jay, wife and friends a full look up and down, the man replied “or maybe it is…” Like all places visited before and after, Jay most definitely left his mark.

Since his passing, we have learned that he was taking advantage of lonely drifters by providing them a place to stay in their RVs, a Texas-sized brunch, and a cocktail hour around his pool. His scheme was that they’d have to bring a gift (he encouraged alcohol) and they’d more than likely have to talk to him and eat his cookies, bacon or steak.

For those that truly knew Jay, Jennifer was his goddess, the two intertwined and carried out this ridiculous life together. Man, did he ever love that woman!

Now on the other side, we’ve learned that Jay was a tissue and cornea donor. Seek comfort in knowing that the Milton stinkeye will live on … For those in receipt of his ACLs, well good luck running.

Jay never liked to say goodbye at parties or stay until the end, it was the Milton ghost escape, and it appears that he’s pulled the ultimate ghost on us. Rest in peace and party on, Jay. Mwah!

In lieu of flowers, you make a donation to one of Jay’s favorite charities, Blessings in a Backpack Boerne, TX.